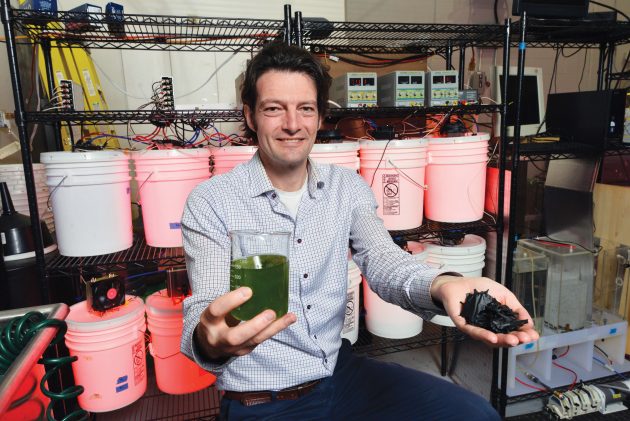 Attention all manufacturers struggling to reduce greenhouse gas emissions! There is hope.

Climate change policies and the challenges that come with them are a reality that industrial companies must deal with. BC has imposed a carbon tax, while Ontario is busy auctioning off carbon credits for its confounding cap and trade program. At the federal level, Canada has made commitments to greenhouse gas (GHG) reductions under the Paris Accord.

Problem is, industry believes these efforts to do more for the environment come at the expense of Canadian competitiveness, particularly among manufacturers already coping with factors such as exorbitant electricity costs (yes, you Ontario).

Battling climate change and how companies can do more for the environment is complicated. So far policy, and the manner in which government has gone about implementing it, has not been popular among manufacturers.

But a company just north of Toronto is working to make the transition for manufacturers to the low carbon economy an easier one. Pond Technologies Inc. in Markham, Ont. has developed a technology that pulls CO2 emissions from a plant’s smoke stack and converts them into different types of algae.

“People don’t understand carbon dioxide. They think it’s bad, but it’s actually necessary. If we didn’t have any CO2 we wouldn’t have plants,” explains Pond CEO Steve Martin. “What we need is a closed carbon cycle.”

The company, now with 14 employees, started in 2007 amid a looming global economic slowdown and escalating oil prices. Martin, wanting a better world for his young son, found inspiration in a Washington Post article that described how to grow algae. “I thought, ‘Right. Let’s do that.’ And we started the company literally the next day.”

Pond’s process uses photosynthesis to convert those harmful emissions, which are further refined into downstream options for revenue generation such as biomass, biofuels and bioplastics. Pond can also grow algae for high-value food additives such as astaxanthin, chlorella, and spirulina using beverage-grade CO2.

Algal biomass produces the same amount of energy as the equivalent amount of coal, and can be refined to produce higher grade fuels such as diesel and ethanol. The company says implementing its algae production system provides enough energy to replace fossil fuels used in most industrial processes and means of transportation, which account for most GHG emissions.

Pond’s innovation captured the attention of the National Research Council of Canada (NRC). With the NRC’s help, Pond built an algal biorefinery at a St. Marys Cement plant in St. Marys, Ont., a big deal for companies like cement-makers, who right or wrong, are often seen as industry’s heaviest carbon emitters. St. Marys saw the Algal Carbon Conversion (ACC) biorefinery as a green solution that helps it start to shed that reputation. So far, the ACC program has attracted $40 million in NRC funding.

The NRC has two full-time employees working with Pond’s bioreactor at the cement plant, alongside two of the company’s technicians.

As for cement makers like St. Marys, there’s an economic opportunity many producers wouldn’t be willing to pass up. Martin explains that a tonne of C02 emissions would produce about a half tonne of algae, which would generate about $1,000 in byproduct revenues (at the low end). The carbon in carbon dioxide is incorporated directly into the carbohydrates, lipids and proteins that make up the algae. A tonne of cement sells for less than $200, so Pond’s economic case is strong: there’s more money in a plant’s CO2 emissions than there is in the cement itself.
“It’s an interesting way to look at it. It could be in future we could be mining limestone to make algae and cement is the byproduct,” Martin says.

In Ontario’s York Region, Pond is working with the City of Markham, Markham District Energy and the NRC to convert carbon dioxide waste emitted from the city’s energy systems. The project put Pond in contention for the NRG COSIA Carbon XPRIZE, a national competition backed by the Canadian Oil Sands Innovation Alliance (COSIA) and NRG with a $20 million grand prize. The competition is meant to accelerate potential solutions for CO2 emissions that could be applied to Canada’s oil sands operations.

Pond Technologies is one of 27 teams advancing in the global competition to develop breakthrough technologies that convert carbon dioxide into valuable products.

Because the company is one of three Ontario-based semi-finalists, it’s also eligible for consideration for a share of a $2.5-million fund established by the Ontario Centres of Excellence (OCE) to help companies develop and demonstrate ideas as they progress in the Carbon XPRIZE competition.

Martin, who has a background in fibre optics, teamed up with Peter Howard, a biologist and now Pond’s vice-president of sustainability. He’s also team leader for the project vying for the Carbon XPRIZE.

“People confuse innovation with invention,” Martin says. “People tend to think of innovation as running in straight lines: from lab to market. But often the people working in the lab don’t have the shared vocabulary with the people looking to exploit the technology for commercial gain.” 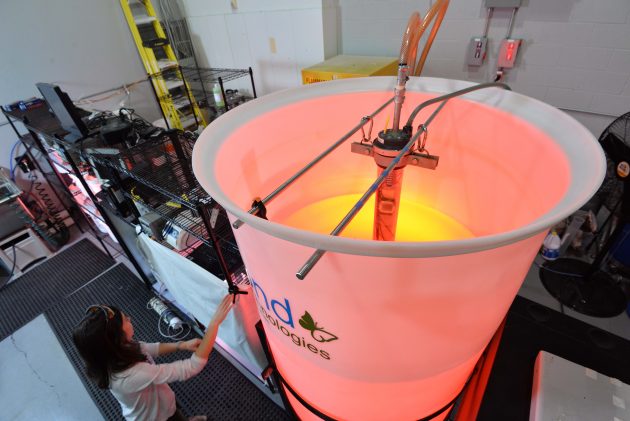 A look inside Pond’s bioreactor.

Pond’s team comes from a diverse background. Emidio Di Pietro, vice-president of engineering, came to Pond from the automotive sector. So did Tony Di Pietro, Pond’s supply chain director. And there’s a group of chemical engineers, environmental scientists, control and automation engineers, lab researchers and site managers that fill out the team. That diversity allows Pond to take a multi-disciplinary approach to innovation, which Martin believes is something too few companies do.

When the company started, there was a lot of good work already done on growing algae, but it was done in “islands” and there were gaps to fill. What was missing from the research was something Martin was able to bring to the table: the light.

Understanding how light – specifically red light – works under water proved to be a significant factor. Gaining control of it helped Martin and Howard bring it all together.

“We are a society fuelled by combustion. We burn things to make things. So the most manufactured product of humans is carbon dioxide. All those automobiles, airplanes, steel, cement are just byproducts,” he says.

For example, manufacturing a tonne of steel produces three tonnes of CO2. But Martin notes carbon emissions came from plant material in the first place, such as oil or coal.

“We’re now digging it up and burning it. But we aren’t doing anything to close the loop to turn it back into something stable. That’s what Pond does,” he says. “The first question you might ask is, ‘What grows faster than anything else?’ The answer is algae.”

It uses a lot of CO2. And as strange as that sounds, if you want to grow a lot of algae, there isn’t enough CO2 available to do it. Doing so requires highly concentrated CO2 emissions, and those are found most at sites of heavy industry.

“The nice thing about algae is that it absorbs the other stuff in the smokestack as well, such as the oxide of nitrogen.

The algae works well as animal feed because of its high profiles of fatty acids, starches and proteins. And partners in the oil sands are interested in using algae as an organic peat moss for soil amendment. Bio-oils can be “squeezed” out of it too.

“I would look at all those emissions and think, ‘Geez, that’s awful!’ Now I think, ‘Look at the opportunity!” Martin quips. “We can put an algae plant on all of those [smoke stacks] and keep all this industry going. We can keep all these people employed. We can make all these products here. It makes [Canada] a more sustainable country, and it makes us money.”

Pond’s next step is to develop a commercial-scale plant with partner Stelco. The company is also working with the Ontario government to co-fund a full-scale plant that generates the financial returns and illustrates clearly the advantages of adopting its technology.

“You know what Pond’s real innovation was?” Martin asks. “We tried it.”

Kim Laudrum is a Toronto-based business writer and regular contributor to PLANT.