Manufacturing cement products creates a lot of carbon dioxide, but it can be used to grow one of nature's greenest sources. 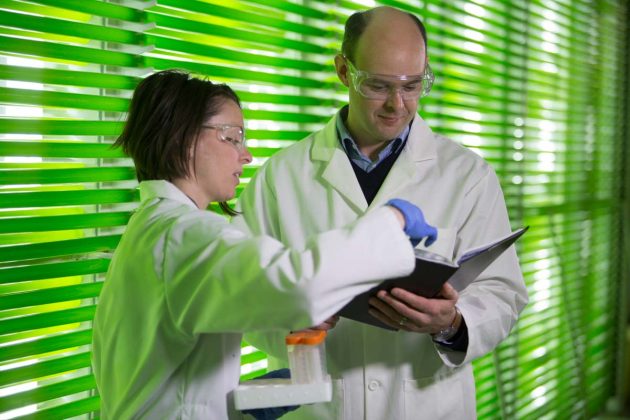 The pressure is on for heavier industrial operations to reduce greenhouse gas emissions, chief among them carbon dioxide. The manufacture of cement products emits a lot of CO2, but what if this byproduct could be converted into something useful that adds to the revenue stream?

St Marys Cement in St. Marys, Ont., southwest of Stratford, is testing a technology that could lead the way if the plant’s pilot biorefinery project works out.

The facility is one of 25 cement plants operated by Votorantim Cimentos, the world’s eight largest producer, headquartered in Sao Paulo, Brazil.

In Ontario, the company produces about 2 million tonnes of CO2 a year, says Martin Vroegh (former director of environmental affairs for Votorantim Cimentos, North America; now senior director, greenhouse gas reduction technologies, Ontario Centres of Excellence). In 2007, the company completed an emissions trading project that involved controlling NOx and SO2, putting it in a position to trade the allowances and make some money from being green.

“Recognizing that, we started to look at what we could do to add value to CO2, our second most manufactured product,” Vroegh says. “If we keep looking at CO2 like it’s a waste, it will continue to be a waste, a pollutant and an emission.”

Around that time he was introduced to Pond Technologies (then called Pond Biofuels), which had ideas about using CO2 to grow algae and needed access to some flue emissions. It came with its own funding, and so St Marys provided the footprint and a pipeline from the stack.

NRC had been exploring the potential of algal carbon conversion during the same period and by 2011 had decided to collaborate with industry, contributing its expertise in the biology of algae and its conversion into commercial products. Pond’s expertise was in the design and production of the bioreactors. Its smaller project with St Marys set the stage for a three-way partnership in 2015 to set up the pilot biorefinery.

Stephen O’Leary, director of the algal carbon conversion flagship at NRC, says the total cost of the pilot plant is $4.3 million over 18 months of the project: six months to get it up and running and a year of collecting data. Production costs will be measured over the next year against the energy required to grow the algae and move it.
The bioreactor, which he describes as large, internally illuminated box 5 x 2.5 x 2 metres deep, represents the largest deployment at an industrial site but it’s pre-commercial scale.

“We’re hoping the data from this plant will help us understand how to continue to work with Pond and other industries interested in deploying this technology, whether it’s cement plants, power generating stations or the oil and gas industry, to scale up from pre-commercial to commercial.”

Vroegh describes Pond’s technology as “phenomenally powerful” as it aims several thousand watts of LED lighting at the bioreactor. “Pond has basically built a greenhouse that grows stuff at ridiculous rates.”

In fact, Pond, which has invested more that $15 million in its technology, claims a growth rate of more than 20 times that of nature’s work in open ponds.

About one tonne of algae consumes 1.8 tonnes of CO2, says Steve Martin, CEO and chief scientist at Pond. “Everytime you hold a kilogram of our algae in your hand, you’re actually holding two kilograms of smoke stack gas that did not go up the pipe.”

The algae are harvested from the system as a paste, and almost all the water is recovered, then returned to the system.

Martin says there is no end to the products that could be made from the paste, among them toothpaste, biofuel, animal feed; and using clean-source CO2, some strains can be used for nutrient supplements. There’s also an application for land remediation at decommissioned industrial sites, such as mines.

Industry is accustomed to seeing cleantech as a cost. Seeing it as a revenue source represents a new way of thinking. “It’s a paradigm shift that is difficult for industry to understand because it’s not set up for it,” Martin says. But a steel plant having onsite biorefineries managing CO2 emissions to produce algae is likely more profitable than making the steel.

Votorantim Cimentos doesn’t need a lot of convincing there’s value in managing the environmental impact of its manufacturing processes. Energy use accounts for about 40% of manufacturing cost in the cement industry, and its Bowmanville, Ont. cement plant is helping to lower those costs. The facility was the first certified to ISO 50001 and it’s the flagship for rolling the energy management standard across other plants.

The company is also working on another project that diverts commercial and construction wood debris from landfill where it would decompose and create methane, another greenhouse gas that’s more harmful than CO2. The construction waste will replace a portion of the coal used to fire the cement kilns to make products used in construction. “A lot of people like to say ‘cradle to grave.’ We like to say ‘cradle to cradle’ and to bring it full circle in our lifecycle analysis,” Vroegh says.

By doing so, the Canadian operations of Votorantim Cimentos are demonstrating that what’s good for the environment is also good for business.