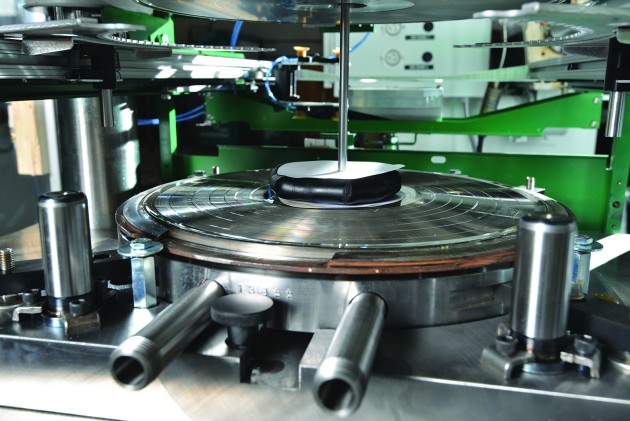 Viryl’s automated press pumps out a vinyl record every 20 seconds compared to an industry average of 28 seconds. PHOTOS: RODNEY DAW

The vinyl LP is back from the dead and a small outfit in Toronto’s west-end is working to make the resurrection complete.

Viryl Technologies, founded by a group of pals last October, has developed a machine that will bring record pressing into the modern age, putting an automated spin on the analogue music format.

“We realized there was a huge gap in the vinyl market and we wanted to expose that,” says CEO Chad Brown, who started the company with colleagues Rob Brown (COO) and James Hashmi (CTO).

That gap was the machines needed to make the records.

Vinyl’s popularity has taken off in the last four years or so, buoyed not so much by boomer-dad’s music snobbery (although that still plays a role), but by a youthful taste for the format’s warm analogue sound – much higher quality than the downloadable MP3s the younger generation grew up with.

There’s also the tangibility of the actual LP that’s drawing in consumers. The music. The artwork. The liner notes. The format delivers a complete musical experience unlike those delivered by compressed audio files buried in your computer’s hard drive.

“Finding vinyl has become a hobby for a lot of people; they’re going to record shops and digging around the shelves. LPs are a historical archive of music that just doesn’t exist anymore,” says Brown.

In the US, a Recording Industry Association of America report revealed that vinyl music sales generated $60 million more revenue than ad-supported streaming services in the first half of 2015, grossing $221.8 million, a 52% year-over-year increase.

And it’s not just the classic rock music LPs that are driving sales. This generation’s artists are printing vinyl as an additional revenue stream. In fact, British songstress Adele’s 25 was Canada’s highest selling piece of vinyl in 2015, moving 6,200 copies followed closely by pop star Taylor Swift’s 1989 at 6,000. The Beatles (Abbey Road) and Led Zeppelin (Led Zeppelin IV) are also among Canada’s vinyl “Top 10,” an homage to the format’s zeal for popularizing classics in modern times.

“(MP3s) are an experience, but not the same experience as owning a vinyl record,” says Hashmi, a University of Waterloo mechanical and mechatronic engineering graduate. “It’s not as fulfilling as owning a piece of music. It’s art, it’s big, and it sounds great.”

The most pressing industry problem is the machines. They haven’t been built in decades. In fact, Brown estimates the last company making machines went bankrupt in the 1980s when cassettes and CDs started to take hold in a marketplace that cranked the volume on convenience and portability.

The scarcity of presses has forced new record manufacturers, including Calgary’s Canada Boy Vinyl and the now-defunct RIP-V in Montreal, to wrangle decades-old equipment from obscure sources and as far away as an abandoned barn in Germany, then bringing them back to life. There’s also a supply and demand issue: the finite number of presses can’t produce enough records to satisfy soaring demand, creating a bottleneck that’s forcing artists and record labels to wait up to a year to press releases.

Viryl’s goal is to eliminate the production bottlenecks. The company is backed by a $1 million investment from a Burlington, Ont.-based machine tool manufacturer, where Viryl’s presses will be manufactured once design and prototyping is complete.
R&D and engineering will remain at the company’s Etobicoke warehouse.

The team of eight (plus an intern) are all engineers by trade. Both Browns, who aren’t related, and Hashmi previously worked together at a medical device start up. When the company was sold, the three had the choice to move to the US or to join forces and start their own business.

Shortly after, Chad Brown was approached by a friend keen on having his engineer buddy build a machine that brought vinyl pressing into the 21st century.

“I texted him back and said ‘no way,’” says Brown, who owned a Markham, Ont. record pressing plant, ACME Records, from 2003 to 2007. “I wanted nothing to do with vinyl. It was all old machines that are no fun to deal with.”

But after the friend tapped the interest of a few investors from New York, he changed his tune and developed a CAD rendering of what a record press would look like if it was built in 2016; not a replica of presses from days past, but a machine packed with modern technology.

While the investors from New York eventually disappeared, Alf Zeuner, the CEO of AXYZ International, a global producer of CNC router, plasma and knifing tables, approached the team. Zeuner says he was looking to diversify his personal portfolio and was so impressed with Viryl’s work, he injected $1 million into the project to build a prototype and get the company off the ground.

Viryl’s machine is meant to improve efficiency and provides pressing plants with the power of data collection to fine-tune operations.

Brown concedes that older presses were also equipped with a certain level of automation, but it was typically a wired relay system that caused major disruptions when something went awry.

“You’d be pulling miles of wire out of the machine looking to find the right path when it broke down,” says Brown, reminiscing about his days pressing vinyl at ACME.

The machine at the Etobicoke warehouse spits out a vinyl LP every 20 seconds, compared to the industry average of 28 seconds, Brown says. Viryl has, however, been careful not to mess too much with the process of making records. Instead, modern automation and data analytics enhance the traditional process Hashmi admits still works well.

That process involves a “puck” (“since we’re Canadian,” says Brown), fitted with a label and squished by a ram under high pressure onto a silver coated, nickel-plated negative that presses the music onto the vinyl.

As flashing comes out, a gripper removes the LP and moves it to a cutting station where excess PVC is removed and finished records are placed onto a stacker for packaging.

What’s different about Viryl is the company’s A.D.A.P.T platform. The machines are equipped to pull data from every part of the process and feed a proprietary interface that allows manufacturers to monitor daily throughput, press uptime and identify, then address diagnostic issues to keep the press running at peak performance.

“One of the major benefits is the ability to get production feedback and automate the process on its own to cut manual labour requirements and the amount of time someone actually needs to be monitoring the press,” says Brown.

Brown estimates the machines will take about 60 weeks of production to pay for themselves at $195,000 a pop.

So far, demand is off the charts, and has the potential to blow an initial estimate of selling 25 machines a year out of the water. AXYZ’s Burlington plant will have the capacity to produce two presses a week likely destined for customers around the world.

“I’m pretty sure someone in every country except Antarctica has contacted us about a machine,” quips Brown, adding that most interest comes from the US and Europe.

Viryl hopes to have its prototype running soon. “If things keep going the way they are, this is going to be a very viable business for us.”

Demand is there, it’s now up to Viryl to satisfy it. For Brown, the opportunity is very real, and unique.

“I don’t think any industry has ever come back from the dead.”

This article appears in the April 2016 issue of PLANT.