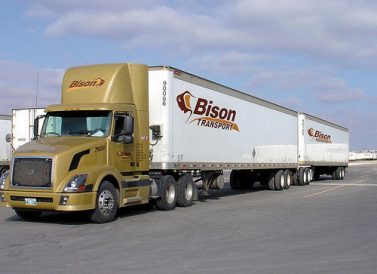 Ballard, the hydrogen fuel-cell developer based in Burnaby, BC,  will provide six of the fuel cell modules – each generating 70 kilowatts (kW) of power – with three modules to be installed in each truck. They’ll utilize Ballard’s LCS technology, planned for commercial availability this year.

Freight transportation accounts for almost 70% of diesel fuel demand in Alberta and contributes about 12 million tonnes of greenhouse gases (GHGs) per year in the province.

The AZETEC project is to run until mid-2022 and will involve the design and manufacture of two heavy duty, extended range trucks that will move freight year-round between Edmonton and Calgary.

The 64 tonne tractor-trailers operated by Trimac Transportation and Bison Transport will be capable of traveling up to 430 miles (700 kilometres) between refuellings.

“The tractor-trailer trucks being used in the AZETEC project are the first Fuel Cell Electric Vehicles – or FCEVs – of this size and capacity to be built and tested anywhere globally,” said Rob Campbell, Ballard’s chief commercial officer.

Emissions Reduction Alberta (ERA) is contributing more than $7.3 million to the project, which is led by the Alberta Motor Transportation Association. ERA is providing the funding through its competitive BEST Challenge program, which targets technologies that demonstrate the potential to reduce GHG emissions in Alberta and secure the Province’s success in a lower-carbon economy.