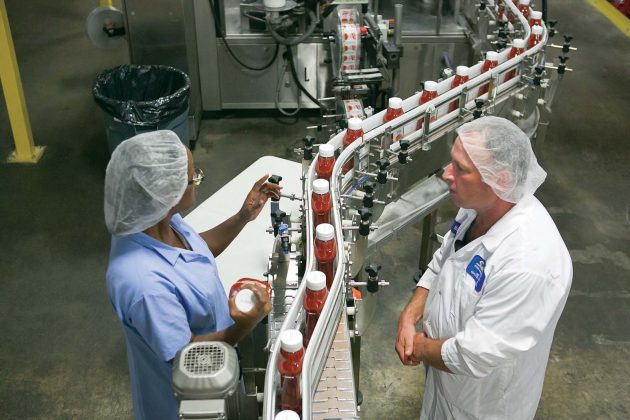 GUELPH, Ont. — Shoppers are facing empty shelves at some stores due to unprecedented demand for food and other goods even as grocers assure Canadians coping with the COVID-19 outbreak that plenty of new items are on the way and manufacturers say they have the raw materials they need.

Temporary shortages are to be expected in spite of a supply chain working in overdrive, experts say, because the system isn’t built to predict extreme, large-scale changes in buyer behaviour.

Shoppers stockpile for a number of reasons, said Mike von Massow, an associate professor at The University of Guelph. Some fear stores may close amid the pandemic. Others buy in bulk with the goal of shopping less frequently to avoid unnecessary exposure.

Shelves keep getting restocked with goods still flowing to the stores. Limited hours have been introduced in part to allow time to unpack and display replacement products.

Canada tends to operate with what’s knows as a “just-in-time food system,” von Massow said. That means grocers and other stores tend to receive food products just before they are ready to put them in the store.

It’s more cost effective for companies than keeping a large surplus that takes up unnecessary space. Some food, like fresh fruits and vegetables, can spoil. Rotten food that can’t be sold brings up the cost of the product for customers.

For non-perishable items, like toilet paper or canned black beans, too much so-called buffer inventory ties up money otherwise available for other things and requires storage space, he said.

“By minimizing inventory, we keep prices lower in the store.”

Companies determine the exact amount of inventory to order and keep through “a bit of a science and also a bit of an art,” said von Massow, who worked for about two decades in the industry during which time he helped with forecasting.

Data helps companies make predictions. They’ll look at historical and recent sales, special events (the Superbowl, for example, may boost demand for avocado as football fans make guacamole for the big game), what influencers are saying about the product and more, said von Massow.

Increasingly, computers crunch the data and make suggestions. A human then looks at these figures and determines if they need to be adjusted up or down.

“The numbers can help you make a decision. They can’t make the decision for you,” von Massow said he teaches his students during a class about forecasting.

Both manufacturers and grocers will forecast demand, and the level of collaboration and information they share can help make their guesses much more accurate.

Canada’s major grocers have worked to reassure customers there’s no food shortage on the horizon as they work with suppliers to keep delivering essentials into their stores and catch up to the demand.

About three-quarters of members of Food & Consumer Products of Canada, a national association for manufacturers, say they’re confident in raw materials supply for two to five months or more, if current trends continue, according to a recent survey of the association’s members.

A fifth projected no issues at any time, even with current trends, while just five per cent foresaw possible supply issues within one month.

This data supports evidence of a demand-based shortage.

If it were a supply-based shortage, von Massow said, shelves would remain empty because manufacturers can’t produce the products or farmers can’t grow or raise the food.

For example, if a disease wiped out 90 per cent of the country’s chicken population, it would be next to impossible to find fresh eggs.

The lag in seeing some products reappear on shelves _ such as flour or antibacterial wipes _ in this case comes from the supply chain catching up to the spike in demand.

The level of collaboration and integration across a supply chain is another important factor, said Giovani Caetano da Silveira, a professor of operations and supply chain management at the University of Calgary’s Haskayne School of Business.

A classical, textbook example of a supply chain includes at least four players, he said _ not only the manufacturer and store where the product is sold, but also distributors and wholesalers.

They could share all kinds of information, such as inventory levels, promotional plans and what markets they may want to serve in the future, he said. Major players may manage multiple parts of the supply chain and be more integrated.

Companies with well-integrated supply chains “can react more quickly … to sudden changes in demand,” he said.

But extreme changes in demand, such as what companies experienced recently with COVID-19 panic buying, are nearly impossible to anticipate, he said.

He noted Canada’s grocery chains seem to have responded well despite the unpredictable spike. That may be explained by the number of companies with collaborative, integrated supply chains that were able to respond to the unanticipated demand quickly, as well as a strong, capable logistics network to move the product from the manufacturer to the stores.

“There appears to be quite a good logistics capability here in Canada, in this case,” he said, particularly for grocery stores and consumer products.