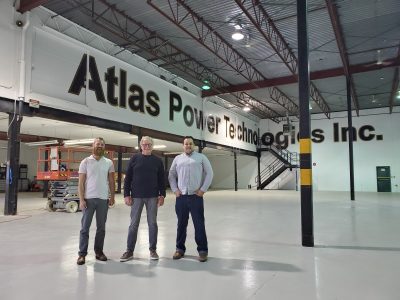 Atlas Power Technologies, Clean energy startup, has announced that its Centre of Excellence, currently under construction in Abbotsford, B.C., is on track to be up and running before the end of the year, bringing technology first developed at the University of British Columbia in partnership with Mitacs.

The company’s clean energy transition work, which culminated in the launch of Atlas Power Technologies in 2016, is one of dozens of Canadian research projects highlighted in a new Innovation Trends video series, called Their World, Our Future, by Mitacs.

“We’re accelerating the clean technology transition timeline by taking the most mined products today, that nobody wants, and turning them into a high value, clean technology,” said Mitchell Miller, CEO, Atlas Power Technologies.

Miller started by establishing collaborations with researchers at Simon Fraser University and UBC with the help of Mitacs, eventually tapping into the Mitacs Indigenous Pathways program to hire student interns to advance his ideas.

“When you think about renewable energy going onto the grid, the amount of energy storage we have to produce is enormous and there’s simply no clear path to get there with existing chemistries,” said Miller. “I get up every day knowing that if we do our job correctly, the world will be a better place for my kids and that’s a nice way to start the day.”