Kicking off the Smart Parka 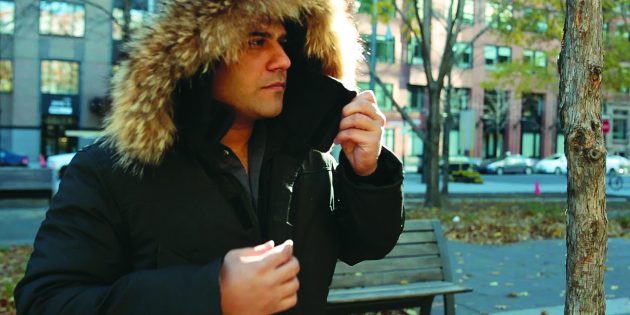 Jamil Khan never intended to set a record. He just wanted to create a functional, yet innovative coat that would battle the best Mother Nature can muster during Canadian winters.

The 36-year old has done both and has in essence re-engineered how companies are supposed to enter world markets – he has become an exporter before becoming a manufacturer.

The Toronto resident just capped off Canada’s largest ever campaign on Kickstarter – a crowdfunding site aimed at creators – to get seed funding for his brilliant Smart Parka coats. When the campaign closed March 26, he raised more than $3.25 million from 8,805 backers.

“It’s beyond my wildest dreams,” says Khan, a native of Pakistan and CEO of North Aware, the company making the Smart Parka. “I set out to raise $30,000 and surpassed that in the first day. To reach this leavel is unbelievable.”

The Smart Parka is proof innovation can take many shapes and forms. For Khan, that was trying to solve the problem of staying warm during the daily trek to his job as a software developer during one of Toronto’s coldest winters on record in 2015.

The solution: four different models for women (three for men) of a functional and stylish coat that includes built-in scarf and mitts, a removable lining for those extra cold days and an extension that can turn the hip-long coat into a mid-length coat. It also boasts a hat pocket in addition to smartphone and tablet pockets, plus a built-in tag that tracks a misplaced coat from a smartphone.

“I looked at this as a problem that needs to be solved,” explains Khan. “ It was a simple idea that a winter coat should have these things built in and shouldn’t be accessories.”

Khan created 15 different versions with a lot of trial and error before he was comfortable with the final designs.
“The biggest challenge was learning how to change things (in the design).”

Yet, this begs the question: What do software development and becoming a fashion designer have in common?

“Absolutely nothing,” Khan admits. “It’s been a complete learning experience from day one.”

And that learning experience started in February 2015 when Khan quit his job to pursue his passion full-time. He spent the next few months perfecting the designs, with the first prototype manufactured in October.

“I quit my job because I knew it would work, I was onto something,” he says. “I asked a few friends to join and help me do this and no one did – they said it wouldn’t work.”

The sole-proprietor chose to go the Kickstarter route in January because he felt it was the perfect platform. The online community agreed with him.

“It’s hard to launch in retail and go global,” Khan says. “[Kickstarter] is a cost-effective way to market and get the word out there.”

He has received orders from more than 15 countries including the US, Sweden, Russia, the UK and even a few from Los Angeles.

“LA, really?” he says with an air of disbelief. “When the market tells you something, you don’t ask questions.”

However, members of the Smart Parka campaign have been keeping him busy answering many questions in online forums.

Everything from sizing, to colour options and yes, where he is going to manufacture the coats.

He’s mulling over his options right now and would will either manufacture the parkas in Canada or Vietnam. All coats are to be delivered by the end of August.

Khan admits the learning experience has melded into overall business operations, including shipping abroad and challenges with a low loonie, which is hurting imports.

“There are many moving parts to exporting and I’m learning at the speed of light,” he says.

Regardless, he extended the Kickstarter reduced offer for approximately $295 compared to $740 until May.

Looking ahead, Khan says he will busy promoting the Smart Parka all over the world, particularly the EU.

“I’m in a hurry,” he says. “I am going to be travelling a lot and establishing my presence in a lot of markets so competitors don’t take my market share.”

As he looks back, Khan admits he took a leap of faith with Smart Parka. But that’s what made it a success.

“I’m all in, including my entire life savings,” he concludes. “I’m a risk taker, but you have to take risks if you want to be successful.”