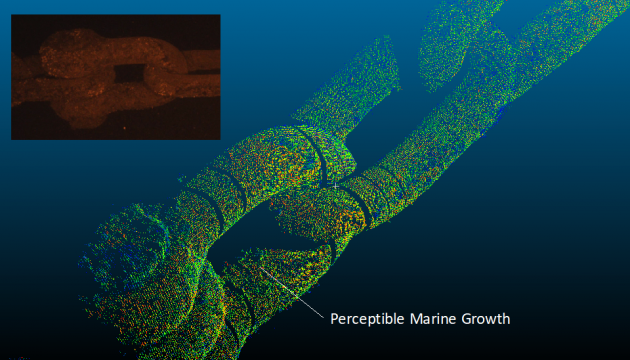 ST. JOHN’S, NL — Kraken Robotic Systems Inc.has been awarded $1.8 million in funding for the development of a mooring chain laser inspection sensor, for use in offshore oil and gas applications.

This demonstration showed that the technology can complete an inspection of a mooring chain and provide complete specifications required by the regulators.

Under this new 16-month development project, Kraken will work with Husky to address remaining technology gaps identified, ahead of commercialization.

Mooring chains, commonly used in the oil and gas industry, anchor FPSO vessels to the seafloor. There are presently two in production off the Grand Banks of Newfoundland (Terra Nova and SeaRose). Worldwide, there are over 250 FPSO vessels deployed.

A floating facility has multiple mooring legs composed of multiple links, each link is approximately one metre in length and 15 centimetres in bar diameter. The mooring chains are constantly in motion (up to 1 m/s) through the water column as the floating facilities are subjected to environmental conditions. Asset integrity regulations require regular inspections of the mooring chains at defined regions with millimetric accuracy to look for signs of wear, and verify system integrity.

Current practice for mooring chain inspection requires a large support vessel to deploy a remotely operated vehicle, which carries a mechanical calliper on its hydraulic manipulator. While the chain is moving in the water column, the ROV pilot must grasp a chain link to perform the required measurement. This process must be repeated several times, sampling several links in each mooring chain. But concerns with the current process include efficiency, risk and environment.

Kraken’s laser scanning sensor solution performs contactless mooring chain inspection from a two-metre stand-off distance but provides the required accuracy. The advantages of this solution will be: i) speed: SeaVision only requires a few seconds to measure a single link; ii) safety: contactless measurement at distances of two metres; and, iii) reduced environmental concerns: SeaVision is an electro-optical piece of equipment.