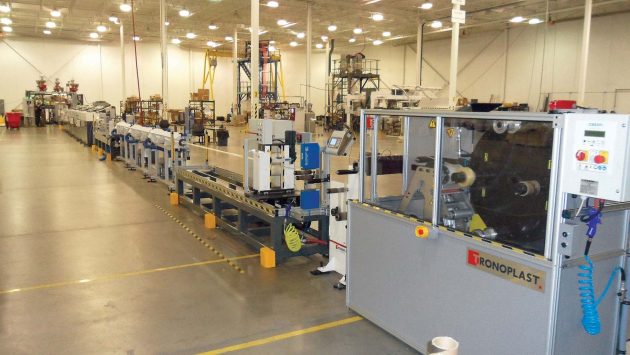 Tronoplast Technologies Inc., founded in 2014 and based in Brampton, Ont., has developed an ultra high-speed, three-layer line that makes porous, naturally smokeable polymeric sausage. Food producers can use real smoke in the sausage making process rather than using flavouring additives, something that couldn’t be done unless casings were made from natural animal tissue.

The Tronoplast HS-TRON is equipped with a sophisticated control system that allows operators to ramp-up line speed at a ratio of up to 10:1 while maintaining critical process parameters, which is necessary to maintain the quality of casing production. Tronoplast also developed a supplementary technology that eases the process of preparing raw material for processing sausage meat into a breathable casing.

Depending on the skin casing formulation, the system produces about 300 metres per minute, but is scalable to 400 metres under optimal conditions. The company claims that’s 25% faster than competing lines.

Two systems are complete, including one sold and shipped to a European customer.

The company was founded as a “greenfield” initiative led by industry veteran Felix Guberman, who was formerly head of technology at Macro Engineering & Technology Inc. of Mississauga, Ont. In 2015, Tronoplast secured US$5 million from Equity Partners, a Silicon Valley, Calif.-based private investment firm, with a mandate to be innovative and set itself apart from the collective of plastic film manufacturers in the Greater Toronto Area.

Guberman has since built a team of 20 people made up of employees with decades-long experience in plastic film.
Tronoplast reported sales of $4.5 million in 2016, with export partners in the US, Russia, Italy and other European countries.