GM Canada lights up while reducing emissions and costs 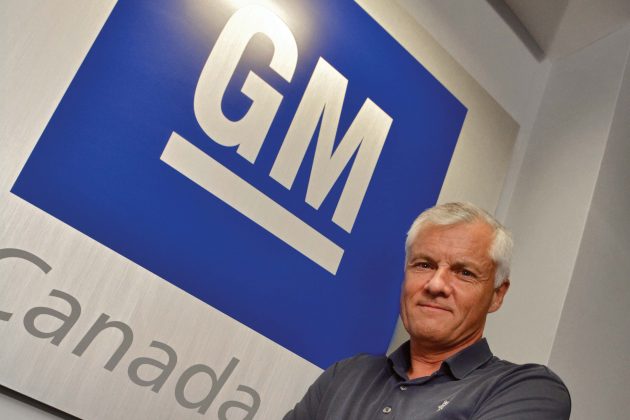 “GM has been working with Alectra for more than eight years, and together we’ve successfully implemented many exciting energy and greenhouse gas-reduction projects,” says Peter Scott, manufacturing engineering manager at the St. Catharines plant. “These projects not only support our energy conservation efforts, but also help us mitigate high electricity costs and improve our competitiveness.”

In 2012, GM started working with Alectra’s Save On Energy program, which offers incentives for businesses and homeowners to help reduce energy consumption. Allen, a certified electrical engineering technologist working for the industrial automotive, machinery and parts branch of Alectra, collaborated with the GM team to identify, implement and validate ways they could retrofit lighting to meet the 20% reduction goal by 2020. Together they identified project costs and Allen helped GM with the program application process.

GM received incentive funding through the Retrofit Program and Process and Systems Upgrade Program (PSUP) for many projects to date, Scott says. This includes the first GM Canada renewable micro-hydro project where gravity-fed canal water from the St. Lawrence Seaway is used to cool process equipment.

“The Save On Energy program incents electrical energy savings in any form,” Allen says. “We incent the retrofit program at $0.05 per kWh or $400 per kW for lighting; and $0.10 kWh or $800 kW for non-lighting, whichever is the highest number. These are capped at 50% of project costs, on the lighting and the non-lighting. So if the energy savings were so great but the costs of the equipment were not, you only get half of the project costs.” 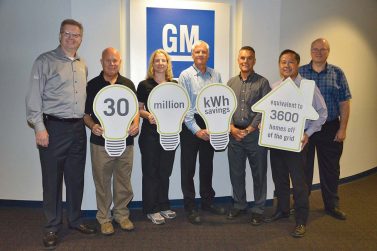 There’s also the bigger and more complex Process and Systems Upgrade Program for larger projects like GM’s. “We incent them at $0.20 per kWh, 70% of project costs or one-year payback, whichever is the lowest. Overall energy use at a propulsion plant is quite high,” Allen says.

GM builds V6 and V8 engines, and GF6 transmissions at the 2-million-square-foot site. The engines end up in vehicles such as Sierra, Silverado, Yukon, Tahoe, Escalade, Camaro, Corvette, Impala, Colorado, Traverse, Enclave, XTS, Equinox and Malibu. The automaker has invested more than $1.85 billion over the past 15 years at the facility that employs 1,389 people.

“Many cross-functional team members from both companies were involved in this process,” Scott says. These members included representatives from the St. Catharines plant team, corporate team, approval agencies, subject matter expert consultants and contractors. “All members were responsible for ensuring the successful implementation of the projects.”

These projects were assigned to the GM project manager who was required to work with all key stakeholders to implement them safely, on time and within budget.

It’s the lighting phase of GM’s energy-reduction initiatives, described by Allen as the low-hanging fruit, that is relevant to operators of plants of any size in Canada.

Under one of the seven phases of the lighting retrofit, GM replaced 854 interior bay metal halides with 700 energy-efficient, smart technology LED lighting fixtures. They also upgraded 17 air make-up units with high-efficiency motors and VFD speed controls. These changes are intended to improve air and light quality, while extending equipment life. But more importantly, both of these projects will result in an energy reduction of 6.2 million kWh, Allen says. That’s enough to reduce carbon emissions by 310 tonnes.

Scott says there were many challenges to overcome during implementation. “These included working safely in and around our production processes during operating hours, working with state-of-the-art smart energy-reduction technologies early in their deployment, and the hardware cost was very high in the initial stages of the project, which challenged the business case.”

What was the biggest surprise for GM? Scott says before VFDs were installed, the plant would shut off a number of air make-up units to reduce energy use during peak demand periods. Although this was an acceptable practice, it reduced air movement in different areas of the facility. With VFDs, instead of shutting off the air make-up unit, the speed of the air make-up unit motor is reduced to achieve the required energy savings while maintaining indoor air movement and quality within the plant.

Scott says GM realized the benefits of these projects immediately upon implementation with the unique set of factors for each project yielding a different payback in each case. “The energy incentives are helpful and often essential in developing viable business cases,” he says.

GM reduced its lighting kWh by more than two-thirds, Allen says. He doesn’t want to say what that would translate into dollars, but suggests it depends on what GM pays as a Class A client of an energy utility. The automaker will pay less per kWh than most customers. If GM reduces consumption during peak periods, it will save even more. The going rate per kWh, depending on time of day and peak use, could be between $0.14 kWh and $0.16 kWh. GM would pay less.

“Lighting is the low hanging fruit, especially if you have metal halide lighting in your plant. LED is really the only way to go right now. The energy saving is huge. It drops by approximately one third of what you had before,” Allen says. “For a big company like GM, if there isn’t a two-year payback they won’t do it. Without the incentives, some of these projects would not have met their rate of return.”

Once the payback has been achieved, the savings continue. “We’re in a 3% world. The payback is continual. After the payback, the rest is just gravy,” Allen says.

In addition to lighting there are also potentially deeper savings with pumps and fans.

A bonus of the GM retrofit is an improvement in safety. “The plant lighting retrofits contribute positively to creating engaging workspaces, better area lighting and work environments, better occupancy sensor and controls, and useful life of the fixtures. Plus, reducing our electrical energy demand from the grid indirectly helps to reduce greenhouse gas emissions from the electricity generation plant,” Scott says.

Metal halides quickly lose their lumens over time while LEDs have a life span of 10 to 20 years.

Alectra and GM have a lot more on the go at the St. Catharines plant. In addition to the lighting retrofit, Alectra has helped GM establish the micro-hydro initiative. These projects have already saved GM much and pushed it closer to a 20% energy reduction by 2020.

Were there any lessons learned at GM that could be shared with other plant managers across Canada? Scott doesn’t hesitate. “Just do it!”

The originally article appeared in the October-November 2018 print issue of AutoPLANT.