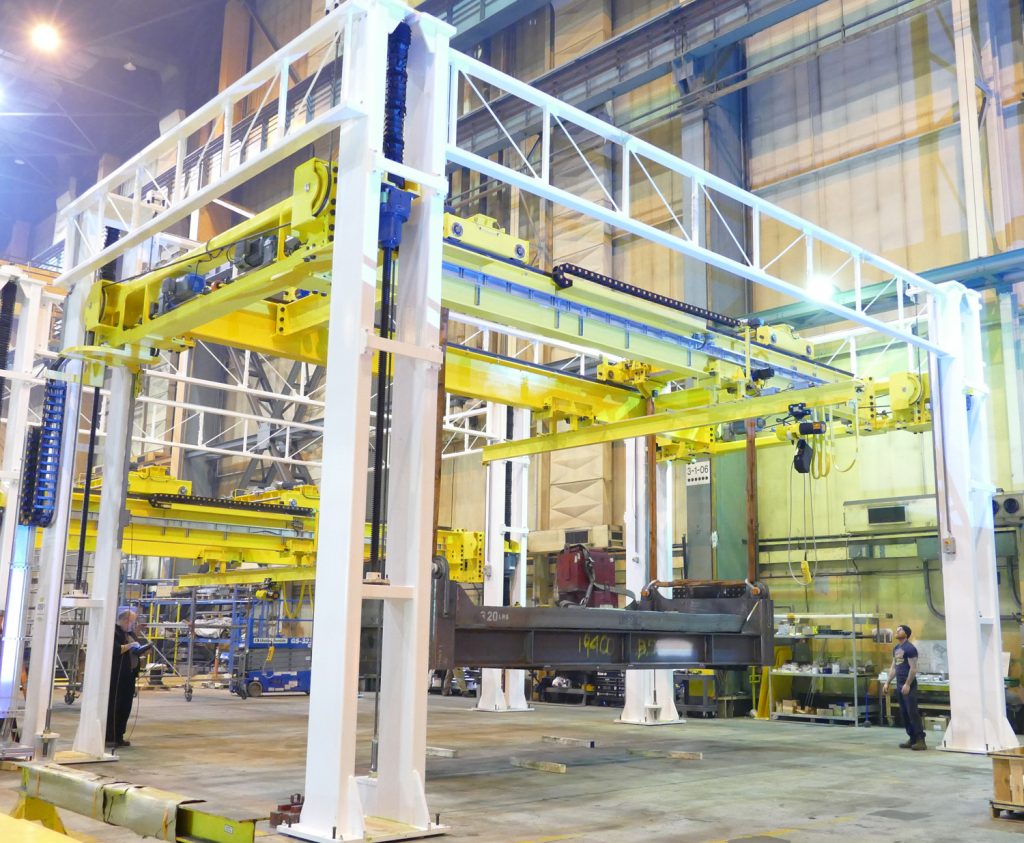 Handing Specialty recently completed a number of significant projects with INNIO in Welland, Ont. at its Brilliant Factory facility.

The 500,000-sq.-ft. project that began as a greenfield development with GE Power has been underway since August 2018 with INNIO. The Austrian supplier of gas-driven power generation completed the acquisition of GE’s Distributed Power business the beginning of 2019 and is making the large Waukesha gas engines there. The plant will eventually employ 200 people.

Waukesha engines are designed to run under high stress conditions with the flexibility to use multiple fuels with rich- and lean-burn reciprocating designs for isolated, mission-critical, and demanding applications.

Handing Specialty, a manufacturer of custom material handling solutions, has 125 employees with two facilities: a 28,000-sq.-ft. plant in Grimsby, Ont. and a 100,000-sq.-ft. space in Hamilton that was part of the former Stelco’s operations.

The assembly process began with an engine block brought to a rollover station by a specialty AGV. Once in station, the engine block is picked up from the AGV, raised and rolled to the correct orientation for mounting various components such as the oil pan and cylinders.

The 15T and 30T engine lift/rollovers were equipped with articulating jibs provided by Gorbel, a Fisher, N.Y. manufacturer of lifting equipment. Jibs are used during the assembly process at both stations. The two identical ceiling-mounted articulating jibs (1,500-lb capacity) were custom painted and engineered with custom modifications to fit the specific needs of the GE/INNIO project.

Articulating jibs allow workers to perform activities outside the normal coverage area of the engine lift/rollover equipment while also rotating in close to the engine for precise load positioning. Mounting the articulating jibs overhead and nesting them inside the equipment allowed other operations to continue nearby without disruption to the machine, the engine rollover process, or to the floor of the workspace.

INNIO has delivered roughly 29,000 of its fuel-flexible Waukesha gas engines to nearly 80 countries and almost every state in the U.S. since August 2018.