...but strongest labour market for manufacturing in 14 years is expected during the next three months. 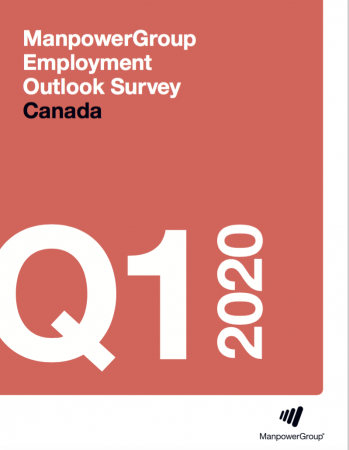 TORONTO — Canadian employers expect a conservative hiring pace over the next three months with the durables manufacturing sector reporting the strongest job prospects, to the latest ManpowerGroup Employment Outlook Survey.

The human resources specialist based in Toronto said with seasonal variations removed from the data, the net employment outlook of 10% is a two percentage point decrease compared to the previous quarter (Q4) and the same time last year (1Q 2019).

Employers in nine of the 10 industry sectors in all four regions of the country expect to add to payrolls next quarter.

The more than 1,900 employers surveyed reveals 12% plan to increase staffing levels in the first quarter of 2020, while 6% anticipate cutbacks and 81% expect current staffing levels to remain unchanged. The remaining 1% are unsure of their hiring intentions.

But prospects for Canadian job seekers, while still positive, are tightening, said Darlene Minatel, country manager of ManpowerGroup Canada. “Despite the slight decline in the national employment outlook, unemployment remains low in Canada and wages continue to rise. Clearly, it’s still a job seeker’s market. Employers are also grappling with widening skills gaps and are hard pressed to find bilingual talent and those in the skilled trades. Job seekers would be well advised to seek training in these areas, while employers might consider upskilling and bridging programs to close the gap.”