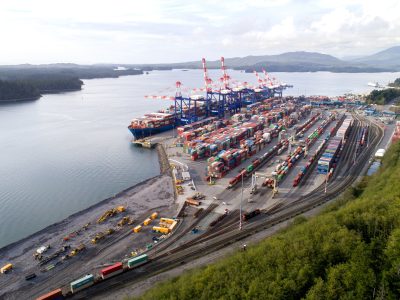 Fairview Container Terminal capacity will increase to 1.6 million 22 equivalent units (TEUs) this summer and 1.8 TEUs in 2024.

The Phase 2B expansion of the Fairview Container Terminal is a response to the growth in container traffic that Prince Rupert has achieved over the last five years. The first stage of the expansion is now 50 per cent complete and will be finished in July, increasing capacity at the Fairview Container Terminal to 1.6 million TEUs, making it the second-largest container terminal in the country.

The second stage of the expansion is set to be completed in late 2024 and will see the terminal’s capacity grow to 1.8 million TEUs. The Phase 2B expansion will result in 300 additional full-time equivalent positions at DP World’s Fairview Container Terminal.

The new Fairview-Ridley Connector Corridor is on track to be completed in Q2 of 2022. The Fairview-Ridley Connector Corridor will reroute container trucks from local trans-load and customs facilities directly to Fairview Container Terminal. Construction work has been contracted to a local First Nations joint venture, the Coast Tsimshian Northern Contractors Alliance, ensuring local construction employment opportunities in the region.

DP World, Ray-Mont Logistics, and the Prince Rupert Port Authority are in the stages of developing a logistics facility on Ridley Island for exports. The rail-serviced logistics centre will offer a  combination of scale, speed and terminal integration that will become the new standard for export trans-load services on the west coast.