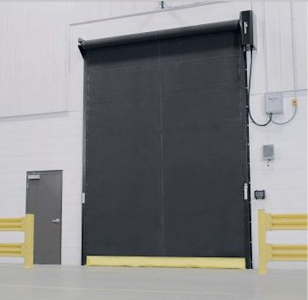 Rite-Hite has expanded its lineup of high-speed doors with the introduction of the Raptor series of rubber doors.

Made from ¼” SBR (styrene-butadiene) rubber, the Raptor doors offer “enhanced durability in tough and harsh environments and boast some of the industry’s fastest cycle times in both loading dock (Raptor Dock) and in-plant (Raptor Pro) applications.”

The Raptor Dock and Raptor Pro are roll-up style doors made from SBR rubber that are housed on an overhead barrel when open. Raptor Dock doors use counter-balance springs (cycle rating 25,000) to assist the jack-shaft operator, while the Raptor Pro uses a springless, direct drive, variable speed operator system.

They operate at speeds of 48” per second, depending on door size, which approaches the speeds of the fastest high-speed fabric roll-up doors.