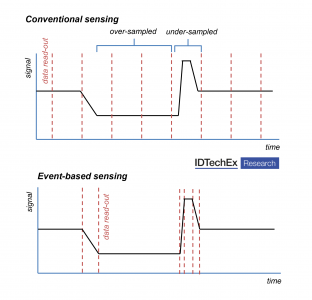 Image sensors have a range of capabilities, from dramatically lowering the cost of short-wave infrared (SWIR) imaging to large-area thin-film flexible photodetectors.

According to IDTechEx, one of the most commercially promising technologies is event-based vision, which is a bio-inspired method of acquiring visual data that promises multiple advantages including reduced data transfer/processing and greater dynamic range.

Such are these merits that IDTechEx forecast the market for the event-based vision sensor chips alone rising from its primarily pre-revenue status today to $20 million per year over the next 10 years. Much of the value is likely to be captured by the software facilitated by event-based vision hardware, leading to a greater total market.

Event-based vision, also known as dynamic vision sensing (DVS), is a method of scene acquisition that mirrors how the human retina/brain acquires information, by recording changes as they occur rather than the entire frame at specified intervals. The approach is entirely targeted at machine vision applications and is not aiming to replace cameras/conventional image sensors.

In a conventional video, an entire image is recorded at a pre-assigned interval, known as the frame rate. For machine vision applications this means that lots of unnecessary data is acquired, whereas the most dynamic part of the image is often under-sampled. Event-based vision sensors resolve this issue by detecting relative intensity changes rather than capturing frames. The pixels report asynchronously, delivering a timestamp whenever the illumination intensity passes a certain threshold.