Alberta and BC are dropping the gloves over pipelines

Notley warns of retaliation if BC’s obstruction of the pipeline continues. 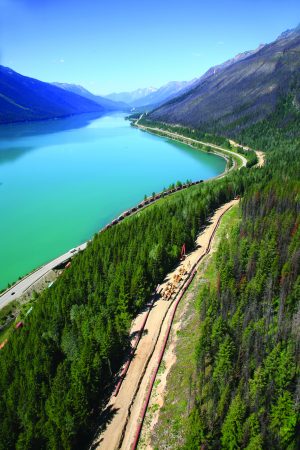 Earlier this month, pipeline company Kinder Morgan announced it will suspend all “non-essential” activities and “related spending” on the federally-approved Trans Mountain pipeline expansion. In unusually clear language, Kinder Morgan explained that it can’t invest more money into a project that it can’t ensure will see completion.

Kinder Morgan chief executive officer Steven Kean said that “a company cannot litigate its way to an in-service pipeline amidst jurisdictional differences between governments” and that Kinder Morgan can’t expose shareholders to “extraordinary political risks that are completely outside of our control and that could prevent completion of the project.”

The company said that to proceed, it must reach agreement by May 31 with the various stakeholders: the BC government, First Nations, municipalities, etc. Without such an agreement, Kean said it’s difficult to conceive of moving ahead with the project.

The sound of gloves hitting the ice came swiftly after the Kinder Morgan announcement.

Alberta Premier Rachel Notley released a sharply-worded statement about BC’s continuing obstruction of the pipeline, with overt threats of economic retaliation if such tactics continues.

Given that both Notley and Prime Minister Justin Trudeau have in part justified their climate policies on the basis that this pipeline will be built, the harder language is not surprising. But Horgan is not backing down, insisting “the federal process failed to consider BC’s interests and the risk to our province. We joined the federal challenge, started by others, to make that point.”

The three met for a summit of sorts that resulted in no meaningful progress.

It’s hard (if not impossible) to see the damage that a failure on the Trans Mountain expansion would have on investor confidence in Western Canada (and the rest of Canada, for that matter). In its annual global survey of oil and gas executives, the Fraser Institute has seen steep drops in investment attractiveness in both provinces in recent years. In 2017, BC dropped to 76th out of 97 jurisdictions (from 39th of 96 last year) on our index, which measures how public policies can deter oil and gas investment.

Meanwhile, Alberta – ranked 33rd overall in 2017 – is the second-lowest ranked Canadian jurisdiction after BC. Alberta’s ranking remains far behind 2014 levels when it placed 14th globally out of 156 jurisdictions. What investor, looking at the train-wreck failure of recent pipeline regulatory processes in Canada, would put their dollars down on Canada when only a few hundred kilometres to the south there are vastly more profitable (and vastly more predictable) investment opportunities.

In the 2017 oil and gas survey, six of the world’s top 10 jurisdictions are in the US compared to only two in Canada (Newfoundland and Saskatchewan). While Alberta and BC are falling in the rankings, US states (Texas, Oklahoma, North Dakota) are consistently among the top performers.

Make no mistake, the Kinder Morgan announcement reflects a watershed moment in Canadian history. What happens in its wake will definitively show the world’s investment community whether Canada’s governments and regulatory processes can inspire the confidence they need to come to Canada (or stay in Canada) to help develop our natural resources and get them to world markets that command higher prices.

Both the province of Alberta and the federal government have made the right pronouncements.

Now it’s imperative that Ottawa back up those words with deeds.