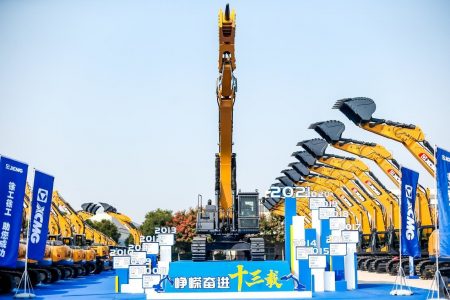 The XCMG Excavator Machinery Business Department of XCMG has manufactured a total of 200,000 units of excavators since its establishment in 2008, the fastest OEM brand to reach this level of sales across the engineering manufacturing industry. The 200,000th excavator that rolled off the assembly line was the XE380DK.

As of July 2021, total exports of XCMG excavators have increased by 152 percent year-on-year, the highest in the industry.

“Marking the production and sales of 200,000 units of excavators is a milestone for XCMG and a new starting point,” said Wang Min, Chairman and CEO, XCMG. “Business in overseas markets will be an important direction for XCMG’s future development and we’ll expand the layout of excavators and other machinery products as well as full-cycle service in Asia-Pacific, Belt and Road Initiative countries, Africa, the Americas and more, providing better services to customers.”

XCMG hosted an event on September 16 celebrating the landmark achievement and the release of two new 60-tonnage excavator products – the XE600 and XE690 DK MAX, both are designed for heavy load mining working conditions

“Since 2008, it’s been XCMG’s mission to create ‘Advanced and Endurable’ products that are recognized and respected in the international market, and we thrive to reach the summit of the excavator industry with our honest, persistent and innovative teams,” said Wang.