All major structural elements are assembled and the rocket plane is standing on its own landing gear. 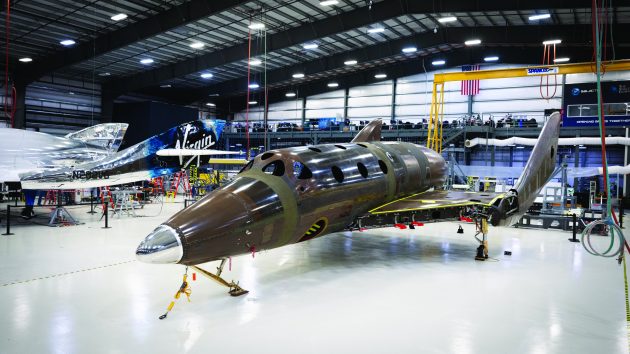 All major structural elements have been assembled and the rocket plane is standing on its own landing gear at Mojave Air & Space Port in California, Virgin Galactic said in a statement.

Photos of the “Weight on Wheels” achievement show the craft in a hangar next to the Virgin Space Ship Unity spacecraft, which has been to space twice during test flights in preparation for commercial operations based at Spaceport America in southern New Mexico.

“We now have two spaceships which are structurally complete, with our third making good progress,” CEO George Whitesides said. “These spaceships are destined to provide thousands of private astronauts with a truly transformative experience by performing regular trips to space.”

The company has not set a date for the start of commercial operations but has said it anticipates doing so in 2020.

It has moved more than 130 employees to New Mexico and late last year inaugurated a program to prepare its first customers for the experience.

The winged rocket ships are designed to carry paying tourists to the lower fringes of space to experience weightlessness, view the Earth far below and glide to a landing on a runway.

The craft also will carry experiments that require several minutes of microgravity.

The fleet is being manufactured by The Spaceship Company, a wholly owned subsidiary.