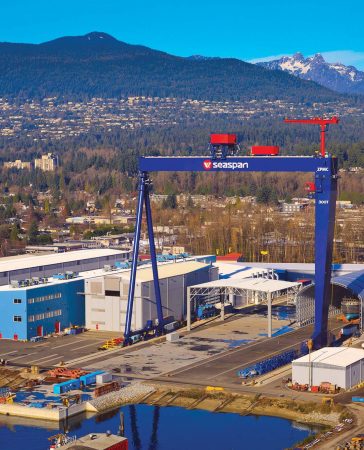 OTTAWA — Mark Lamarre is making his latest pitch for why Ottawa should choose Seaspan ULC to build the Canadian Coast Guard’s next flagship, the CCGS John G. Diefenbaker.

The pitch involves an arrangement in which, if the Vancouver shipbuilder gets the contract to build the polar icebreaker, it will hire Newfoundland-based Genoa Design International to do part of the work.

The aim of Lamarre’s presentation is to highlight both Genoa’s potential and how giving the contract to Seaspan, which announced a similar deal with Ontario-based Heddle Marine in June, will benefit different parts of the country.

Yet there is something else to his spiel, an underlying frustration over the fact he is having to sell his yard as the best place to build the desperately needed polar icebreaker. The source of that frustration: Seaspan already won the work once before.

The Diefenbaker was first announced by Stephen Harper’s Conservative government in 2008 and awarded to Seaspan in October 2011, one of seven ships to be built by the Vancouver shipyard through Ottawa’s multibillion-dollar shipbuilding strategy.

The plan at the time was for the entire deal, valued at $8 billion for all seven ships, to usher in a new era of stability and prosperity for shipbuilding on Canada’s West Coast while delivering much-needed vessels for the Coast Guard and Navy.

The Diefenbaker was arguably the crown jewel of the package. Originally budgeted at $721 million, the polar icebreaker was supposed to be delivered by 2017 and replace the Coast Guard’s flagship, the CCGS Louis S. St-Laurent.

But scheduling conflicts, technical problems and other issues scuttled the timeline and budget – which was increased to $1.3 billion in 2013 and is now under review again – before the government lifted the ship from Seaspan’s order book in August 2019.

Ottawa asked shipyards in March to explain how and why they should get the contract. Seaspan and Quebec rival Chantier Davie, which lost out of the competition that saw Seaspan get the Diefenbaker in 2011, were among the respondents.

Still, it’s clear Lamarre doesn’t think there should be any question about which yard should be tasked with building the vessel.

“As I said, we competed for the work in 2011 and won the right to the non-combat vessels,” he said. “Since then, we’ve invested into the one of the most modern shipyards in North America.”

The company says those investments have totalled $185 million over the past nine years and were specifically made for the purpose of building the icebreaker _ and Lamarre says not winning the contract “changes our economic outlook.”

“We are a profitable business now,” he says. “And we have a program of work in front of us, but I just want to underscore again that this is work that we felt that we won…. And it’s what we based our decision-making on for investing in this program.”

Asked whether Seaspan would sue the government if it didn’t get the contract, Lamarre says: “It’s too early for that.”

The government has not provided much of an explanation for why it took the Diefenbaker away from Seaspan, substituting in 16 smaller vessels that the Vancouver shipyard argues were already promised to it by the previous Conservative government.

Ottawa has said it wants to make sure the icebreaker is built “in the most efficient manner,” noting the increasing age of the Coast Guard’s entire icebreaker fleet. It has not said when a decision might be made.

Davie is considered Seaspan’s chief competitor for the Diefenbaker. After losing out of the competition for work in 2011, the rival yard has since charged back and is now in line to build six medium icebreakers for the Coast Guard.

Yet even as Seaspan has faced continuing difficulty delivering on its schedule, Davie still hasn’t delivered two of three second-hand icebreakers it pushed the Liberal government to buy two years ago.

The Quebec company nonetheless insists it _ not Seaspan _ is best placed to build the Diefenbaker, particularly given it is already in line to build the other six icebreakers.

“As the national icebreaker centre, we will consolidate experience, expertise and skills at Canada’s largest and highest capacity shipyard to create world-class icebreakers in a competitive and sustainable manner,” Davie spokesman Frederick Boisvert said in a statement.

“As has always been the case, Davie is the only shipbuilder capable of delivering the polar icebreaker.”

Lamarre argues that with the investments made in its Vancouver shipyard and its new partnership with Genoa, Seaspan is ready to start work on the Diefenbaker now _ and that Ottawa should stop wasting time and just move ahead with its original plan.

“I don’t know why you would give it to anyone else other than Seaspan,” he said.