A basic income program is necessary, but not sufficient, for a complete economic safety net, researchers suggest 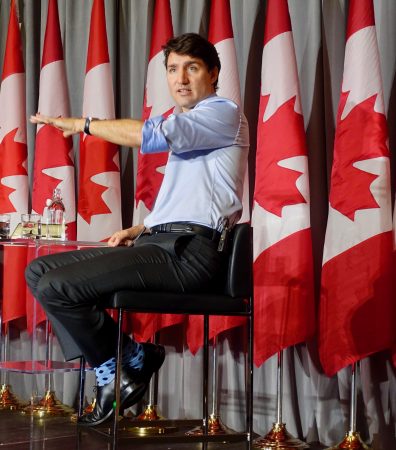 Justin Trudeau’s government initiated the Canadian Emergency Response Benefit to help people who lost their jobs during the pandemic. Why not make such a program permanent? PHOTO: Steve Jurvetson

This story is part of a series that proposes solutions to the many issues exposed during the coronavirus pandemic and what government and citizens can do to make Canada a better place.

COVID-19 has prompted the federal government to support individuals through the Canada Economic Emergency Benefit (CERB). Simultaneously, advocacy for a basic annual income has exploded, with some suggesting the CERB could evolve into a basic income.

Basic income has become the Swiss Army knife of social policy. Beyond offering sufficient income to manage the daily expenses of living, advocates believe it will improve health and psychological outcomes, enhance distributive justice, mitigate the employment effects of automation, spur gender equality, create true freedom, improve the esthetics of existence and transform the relationship between people and work.

I suggest a basic income program is necessary, but not sufficient, for a complete economic safety net.

My observations are based in part on the lessons from Canada’s two basic income experiments: the Manitoba Basic Annual Income Experiment (Mincome), which was conducted from 1974 to 1979, and the Ontario Basic Income Pilot (OBIP), a short-lived experiment by the former Ontario government of Kathleen Wynne that ended in 2018. I have been working with Mincome data since 1981 and also served as a technical adviser to OBIP.

Use of a negative income tax

As with Mincome and OBIP, most proposals for a basic annual income rest on a negative income tax. While an income tax requires people to pay money to the government, a negative income tax uses an individual’s most recent tax return to verify eligibility for the basic income and to calculate the monthly payment which is distributed to recipients by direct deposit. OBIP required applicants to file a tax return and have a bank account, so these are not unusual requirements for participants in a basic income program.

A negative income tax would offer a guaranteed payment for those whose income is below a certain level. For every dollar earned above this guaranteed amount, the basic income payment falls by a percentage until earnings reach a level sufficient to eliminate any payments.

In Canada we already have a basic income for families with children in the form of the Canada Child Benefit (CCB). If we use the OBIP model, a single parent with no income and two children under 18 could expect to receive around $27,000 from the basic income plus CCB (as well as a GST credit). A basic income would not need to provide for children, but it may create different support levels for couples and those with disabilities.

Must be a federal program

Using the CCB as a guide, a first principle is that any basic income in Canada must be a federal program administered through the income tax system. The amount paid to each Canadian would be the same anywhere in Canada. To compensate for regional variations in costs, provinces could elect to create supplementary payments administered by the federal government, as they currently do with the CCB.

This all seems simple, but there are practical and political challenges.

First, many Canadians do not file income tax returns. Indigenous people who are registered under the Indian Act and earn income from First Nations-owned enterprises do not pay tax on that income. Social assistance recipients also do need not file. A basic income would therefore require government to expand its existing proactive effort to encourage low-income people to file tax returns.

Further, because income tax filings are annual, applicants whose income status changed during the year would need a way to qualify for a basic income between tax returns. The same online eligibility affidavit used by CERB is a solution for this problem.

Impact on the incentive to work?

We also don’t know how a basic income would affect a person’s incentive to find work, which is shocking considering the many millions of dollars consumed by studies since the mid-1970s to settle this very question. The problem is participants in all the studies knew the payments would end in a couple of years and did not disconnect from employment.

This uncertainty over how people will change their willingness to work when the basic income becomes permanent argues for starting with quite low payments — certainly lower than the CERB — and adjusting slowly as we “learn by doing.”

There’s another issue to consider. COVID-19 has stopped the income of many who own homes, cars and financial assets. Do we pay the same basic income to someone with hundreds of thousands of dollars of net worth — common for many who have lost their jobs due to COVID — as we pay to a homeless person living under an overpass in a cardboard box?

I think not. Owning assets such as a house or car after reaching a threshold value should disqualify someone from the basic annual income.

Mincome was the only negative income tax experiment to adjust payments based on both income and net worth. In the ‘70s, social assistance programs commonly required applicants to liquidate their assets before applying for support. Nowadays, applicants may have a modest degree of wealth and still qualify for social assistance payments.

Most Canadians would agree that anyone with a certain level of net worth should draw this down before qualifying for the basic income. As an example, using the support levels for a single person used by OBIP, a possible threshold is $100,000 in net worth (equity in a home, cars, savings), above which someone would become ineligible for the basic income.

No need to liquidate assets

One need not sell the home in times of adversity because reverse annuity mortgages offer a method for accessing home equity to support the household.

The principle is clear — a basic income is the last line in the economic safety net.

Finally, aside from Canada Revenue Agency’s role in eligibility determination and payments administration, its scope of operations will increase through the need to track changes to net worth and to verify claims of a changed income between tax filings. Audits of recipients will also become more frequent to maintain the integrity of the program and to secure the political support of the majority of Canadians who are not receiving the basic income.

Compared to chasing scofflaws and the uber-rich, audits of poor people seems extreme, but recent concerns about the possible fraud in the CERB illustrates the need.

A basic income is possible for Canada. By creating a federal program as the backbone, with provinces offering top-ups and other poverty supports, developing the needed administrative processes and implementing the program over five years, we can get it done.

Related Stories
Basic income pegged at $98B as calls for it grow due to COVID-19 [UPDATED]
Liberals to use regs to create income support after CERB winds down
Extending CERB for months could double $60B budget: PBO
Significant changes to wage subsidy and CERB programs required: CFIB