The federal government has signed a contract with the Toronto medical equipment manufacturer for 1,020 new ventilators 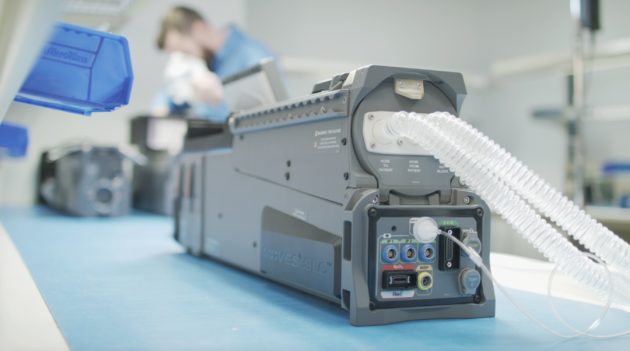 Thornhill Medical’s MOVES SLC unit is a compact portable, self-contained device that provides all of the crucial functions available in a modern intensive care unit (ICU), according to the firm. It integrates the functions of a ventilator that generates its own oxygen from the air, a full suite of critical care monitors, and suction — all able to run on battery power. PHOTO: Thornhill Medical

OTTAWA — One of the companies making ventilators for the federal government is expanding its production capacity more than tenfold to meet demands created by the COVID-19 pandemic.

Thornhill Medical CEO Lesley Gouldie said April 8 normally her Toronto-based company would produce at most 50 ventilators in a month.

Since mid-March, the company has added staff, joined up with a bigger manufacturer and worked around the clock to produce 10 times as many to fill an order from the federal government.

“It’s been an extremely intense period for our company,” Gouldie said in an interview with The Canadian Press.

“We’re working very hard in conjunction with our manufacturing partners to get these into the hands of Canadians as soon as possible. People are literally working night and day to make that happen.”

Prime Minister Justin Trudeau said April 7 the federal government had set in motion orders for up to 30,000 new ventilators to equip Canadian hospitals to handle the rising number of critically ill patients with COVID-19. The artificial breathing machines can help people who are too sick to breathe on their own.

Canadian hospitals had an estimated 5,000 ventilators at the outset of the outbreak and every province is trying to get more. Several hundred patients are already on ventilators in intensive-care units, and thus far the health system has coped. But in all of the worst-case scenarios for the spread of COVID-19, there will not be enough ventilators to meet the need.

The federal government has signed a contract with Thornhill for 1,020 new ventilators, and Ontario has a contract for 40 more of its own. A letter of intent says Canada could increase its order by another 900 if supplies and demand warrant it.

Ottawa has also signed letters of intent to get about 10,000 ventilators from each of Montreal’s CAE corporation, Victoria’s StarFish Medical and a consortium known as Ventilators for Canadians.

Thornhill Medical began working with Ottawa on its contract about three weeks ago, first offering 20 ventilators it already had ready, then increasing the number it could offer to 500, and now to 1,020.

Gouldie said the key element was partnering with Linamar, a Guelph, Ont.-based manufacturer of machine parts and motors for cars, boats, wind turbines and farm equipment.

Gouldie said Thornhill doesn’t have the people or space to produce that many of its ventilators on its own. Normally a company of about 40 people headquartered in downtown Toronto, Thornhill was created more than 15 years ago when Toronto doctors joined with engineers to make innovative medical equipment. Its ventilator, known as MOVES, has been made for about 15 years, and has been used by the military and during natural disasters because it is portable.

For the last couple of weeks, Linamar staff have been at Thornhill learning about the product, and developing strategies to find the materials needed to manufacture it in Linamar’s own facilities.

Gouldie said one of the key challenges is finding the supplies for the 1,500 components that go into each ventilator.

“Every day there has been a different challenge and every day we have worked through the challenge,” she said. She said Linamar’s expertise in sourcing supplies is critical to the process.

She said the first eight ventilators, which were already on hand, were delivered last week. More will go out in waves this month, with the rest of production with Linamar starting in May.“

“That is on the assumption we continue to work through the supply chain and there’s no significant challenges that prevent the plan from being executed as we expect,” Gouldie cautioned.

Demand for Thornhill’s ventilators is coming from all over the world, but Gouldie said the company is filling Canada’s needs first. If supplies are still available after that, Thornhill will work with companies in other nations.

“We’ve absolutely been approached by companies or organizations on every single continent,” she said. “It’s been quite extraordinary the range, the geographic diversity of people that have reached out to us, wanting to know if they can access our technology.”