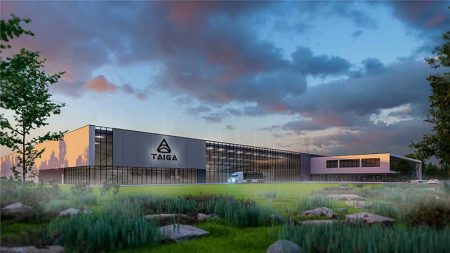 The first phase of construction, scheduled for completion in 2022, represents an investment to accelerate the mass production of Taiga electric snowmobiles and personal watercrafts, and Taiga’s side-by-side vehicles, which are expected to be ready for production in 2022.

“This facility, a part of the $185 milliom in recently announced funding, will bolster Taiga into becoming a globally leading OEM for powersports vehicles,” said Samuel Bruneau, CEO, Taiga. “We have seen strong customer demand limited by product availability. This new facility shows Taiga’s continued commitment to be trailbreakers and offer electric vehicles capable of diving mass market adoption without compromise.”

“It’s always a pleasure to receive advocates and entrepreneurs who wish to establish themselves in Shawinigan,” said Michel Angers, Mayor, Shawinigan. “Especially when it’s a start-up that has developed in our entrepreneurial ecosystem and is part of one of our four pillars of economic diversification: energy efficiency and green technologies. Shawinigan welcomes the entire Taiga Motors team.”