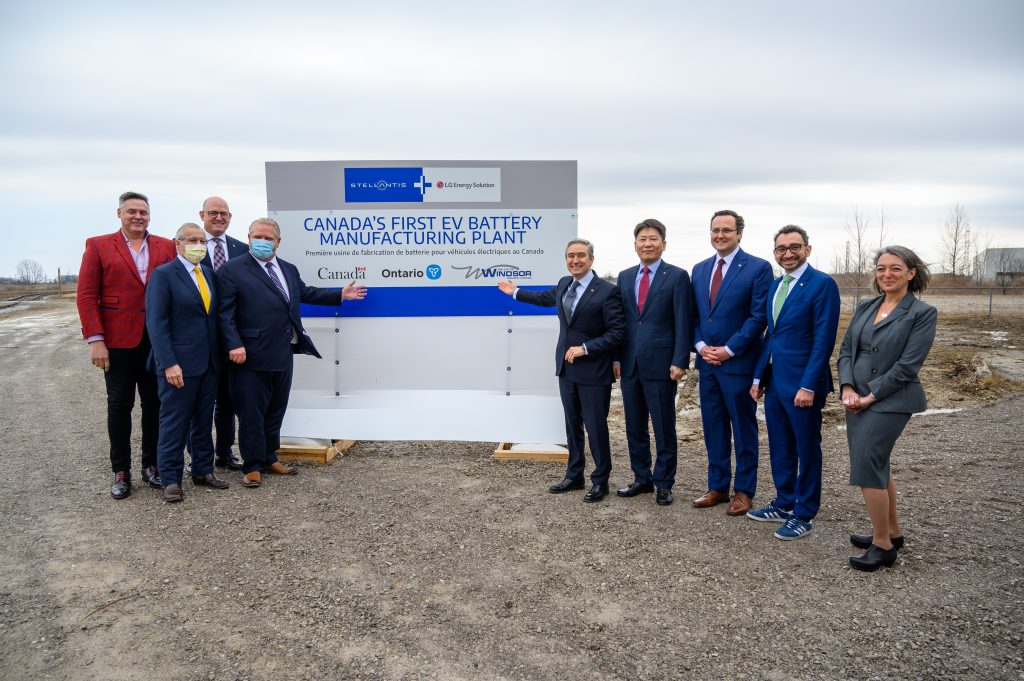 “Our joint venture with LG Energy Solution is yet another steppingstone to achieving our aggressive electrification road map in the region, aimed at hitting 50 per cent of battery-electric vehicle sales in the U.S. and Canada by the end of the decade,” said Carlos Tavares, CEO, Stellantis CEO. “We are grateful to the municipal, provincial and federal levels of government for their support and commitment to help position Canada as a North American leader in the production of electric-vehicle batteries.”

Construction on the new plant is expected to begin later this year, with production operations starting first quarter 2024, and being fully operation in 2025. The plant will produce lithium-ion battery cells and modules for Stellantis’ vehicle production requirements in North America.

The new plant will create an estimated 2,500 jobs in Windsor and area. Annual production capacity of over 45 gigawatt hours is expected at the plant.

“Today’s announcement of a world leading facility to build electric-vehicle batteries in Windsor is an investment in our workers, our communities, and our future. Partnerships like these are critical to creating new jobs and putting Canada on the cutting edge of the clean economy. By working together, we are creating thousands of new jobs, making a difference in the lives of people now and making sure that future generations have a clean environment to live in,” said Prime Minister of Canada Justin Trudeau.

Stellantis and LGES expect the plant to help establish a battery supply chain in the Windsor area.

“Attracting this multi-billion-dollar investment will secure Ontario’s place as a North American hub for building the cars and batteries of the future. As we secure game-changing investments, we’re also connecting resources, industries, and workers in northern Ontario with the manufacturing might of southern Ontario to build up home-grown supply chains. Every region of Ontario will benefit with thousands of jobs being created and a stronger economy that works for everyone,” said Ontario Premier Doug Ford.

“Stellantis is Windsor’s largest employer and has a rich history in this community. Chrysler began operations in this community in 1925 and has employed generations of Windsor–Essex workers at its facility. With this announcement, we are securing the future for thousands more local workers and securing Windsor’s strategic location as the home of Canada’s electric vehicle future. As the world pivots to EVs, Windsor will soon be home to the battery manufacturing facility that powers it all,” said Mayor of Windsor Drew Dilkens.

Closing of the joint venture is subject to customary closing conditions, including regulatory approvals.