Hockey sticks have been made in Cambridge for 133 years, but this operation is now unique, as stick making has shifted overseas. 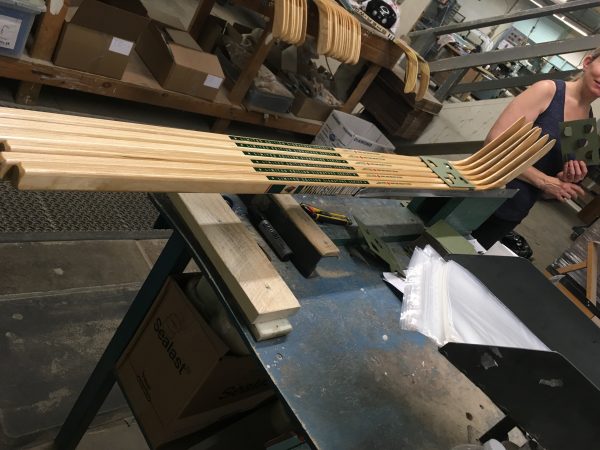 Heritage Hockey Sticks says it is the lone manufacturer in Canada or the United States that mass-produces wooden, ABS, foam-core and hybrid composite sticks.

CAMBRIDGE, Ont. — There is a plant in southwestern Ontario that is not only one of Canada’s oldest continuous manufacturing operations, but has been making equipment for our national pastime since before that sport’s professional league was founded.

30 years older than the National Hockey League (NHL), the Cambridge, Ont., facility that houses Heritage Hockey Sticks Inc. is described by its owner as the last hockey stick manufacturer in Canada.

W. Graeme Roustan says, “100 years ago there many, many hockey stick companies, but Heritage is the last one.” He continues, “The facility is historic. It should be a Canadian shrine.”

Hockey sticks have been made in what was formerly Hespeler, Ont. — now a part of Cambridge — since 1887. The company that is still in business today was formed when stick manufacturers from several southwestern Ontario communities were brought under one roof in Hespeler during the 1930s.

Hespeler Wood Speciality Company, as it became known, would see several changes of corporate ownership, under brands like Cooper and Nike Bauer, before the latter’s decision to divest itself of wood stick making would push a group of employees to purchase the plant in 2004. The now independent Heritage Hockey Sticks finds itself under the leadership of Roustan, who purchased it in April 2019.

Roustan is a hockey business magnate whose resume includes acquiring Bauer Hockey from Nike in 2008 and a close but unsuccessful attempt at buying the Montreal Canadiens in 2009. He has added Heritage to the Christian and Torspo equipment brands and The Hockey News, one of the sports’ most popular news outlets.

“I think I’ve touched more pieces of the hockey business than most people I’ve come across,” Roustan says. 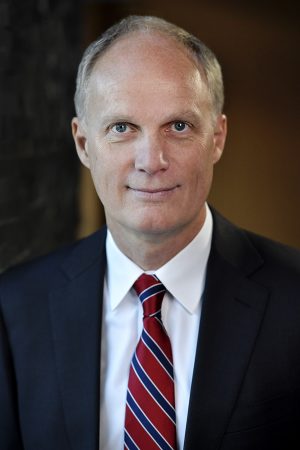 Roustan’s love of hockey started growing up in Montreal in the 1960s, where he took up the game at the age of three, but his passion transformed into a career when his venture capital firm, Roustan Capital, began acquiring companies in the hockey space.

Describing one of his more notable ventures, Roustan says, “I acquired a company that manufactured refrigeration systems for ice rinks, and that company was involved in the building of ice rinks all over the world.” He continues, “I’ve built ice rinks in Saudi Arabia, in Kuwait, in the UAE (United Arab Emirates), in Doha, Qatar, all throughout the Middle East.”

His relationship with Heritage began in his Bauer days when the Cambridge manufacturer was making sticks for its former owner, among other major brands like CCM. “I’ve wanted to acquire that business for many years. And I finally was successful in 2019.” 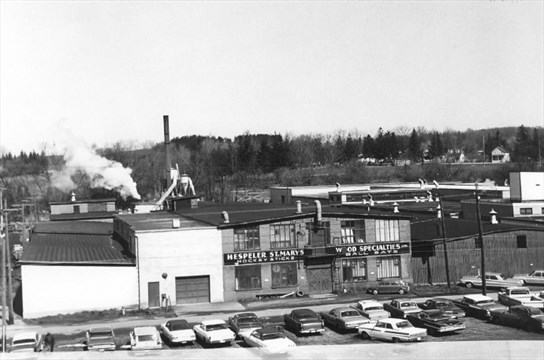 The company called Heritage today, formerly Hespeler Wood Speciality Company, was formed when stick manufacturers from several southwestern Ontario communities were brought under one roof in Hespeler during the 1930s.

“We have over 1000 SKUs of product we can make in our catalogue,” Roustan says.

The executive explains that the manufacturing process for this product catalogue is complicated and difficult. “It’s a long process to make a stick. It’s very labour intensive and there’s a lot of hands on the sticks.”

The number of employees working on an order can vary depending on an order’s size. “It’s a flex work staff that can go from as low as 20 to as high as 60.”

Roustan says the talent of his staff is the secret to Heritage’s success. “The people in the community of Cambridge, in that region, who have been making sticks for more than 100 years, are craftsmen. These are very skilled people that make a unique product. The reason why we’re still in existence is because of the people.”

The COVID-19 pandemic has placed some restrictions on operations, but for the most part, it’s business as usual for Heritage. “We have safeguards in place. We’ve limited the number of employees in the building,” Roustan says. However, “Social distancing in a factory like ours is already sort of built in. Manufacturing processes are done at different stations, and these stations are already far apart.” In some cases, stations are between six and 12 metres apart because of the size of the machinery.

Roustan sites one example, “We have one machine there that we call the ‘Yellow Submarine’ because it’s massive and it looks like a school bus. There’s one person on one end and one person on the other end, and the machine itself is seven or eight metres.”

Another operational change spurred by the pandemic involves spraying down every shipment with disinfectant before it heads out the door. “We are spraying down the bundles, plastic bags and then the whole pallet, including cardboard and shrink wrap before we ship,” explains Roustan.

The pandemic hasn’t affected supply chain issues either for Heritage. “We have inventory and raw materials that we’ve bought over the last six and nine months, so we are actually full on inventory right now and we are in the processing stage. We don’t have any issues right now,” Roustan says.

He continues, “For this COVID-19 situation, which we are all living with right now, it is hopefully a short-term business disruption. We are still working, and we are preparing orders as we speak. Our product delivery into the future is well-entrenched, and we have great partners moving forward.”

Roustan explains that Heritage’s top customers are the NHL’s 31 teams, which source autograph and promotional sticks from the Cambridge firm, along with Canadian Tire.

Business with the NHL is picking up once again, as the league is hoping to return to play later this summer after being on hiatus since March.

Roustan says, “There is such a feeling of pent-up demand out there for hockey to return that Heritage customers are calling in to place orders.” He continues, “The owner of an NHL team (and a repeat customer) reached out to me directly on June 11 to order 10,000 sticks for July delivery.”

Also, “They have a long vision,” he continues. “We’re dealing with orders from Canadian Tire that have delivery dates of six months, to a year to two years from now. So our planning for the future is in lockstep with Canadian Tire.”

Geoff Sarjeant, assistant vice-president, Sports & Pro Hockey Life at Canadian Tire Corp., says the retailer has had a long-standing relationship with Heritage because it is the leader in the wood stick category. “Canadian Tire still has a very strong wood stick business. It’s almost non-existent everywhere else.”

Sarjeant, a former professional goalie who had stints with the St. Louis Blues and San Jose Sharks, says “A lot of our supply comes through Heritage. To deal with somebody who not only knows the industry, but has some domestic supply, it helps lessen the risk for us.” He continues, “Instead of having to get container fulls in at a time [from overseas] we can flow the goods a little bit quicker from someone who’s closer. If you’re going to rely on a supplier that’s going to take three months to get you something, that’s not really viable.” 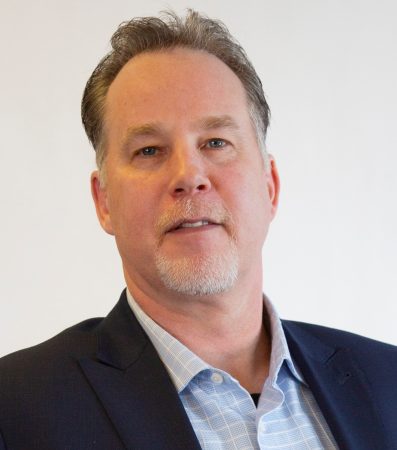 Sarjeant explains that in addition to simplifying its supply chain, Canadian Tire chooses Heritage for quality. “They have good people who know wood. Their long history of deciding where to get the right shafts from, and the right stock of wood and how to join it and how to form it together, that experience you just can’t replicate on the purchasing side.”

He continues, “Their quality is always a bit better than most of their competitors. They’ve always had a keen eye for raw materials and how they’re put together.”

As far as what Roustan’s leadership has brought to the table, Sarjeant says, “He’s pretty entrenched in the hockey network. He was offering a bit of cross-promotion with his Hockey News business. That’s certainly a unique way to get some business. The product’s got to be right, and the price has got to be right, but that’s sort of brought that relationship along.”

Sarjeant says, “We value our selves as a Canadian icon. We all have bottom lines to look at, but if we can factor in all things, we try to lean towards as much domestically-made product as we can. It really helps with the marketing value.”

He explains further, “There is this underlying perception of quality when it’s made in Canada. Especially from a hockey company.”

Sarjeant says Canadian Tire sources about 50% of its wood sticks from Heritage, but, “We’ve been talking since Graeme (Roustan) brought the company on how we expand that, how we bring that up to 100%. It’s been a topic of conversation for a year or more with Graeme and Heritage.”

Roustan says that while Canadian Tire does buy sticks from Heritage’s overseas competitors, he is confident more of that business is going to be repatriated. 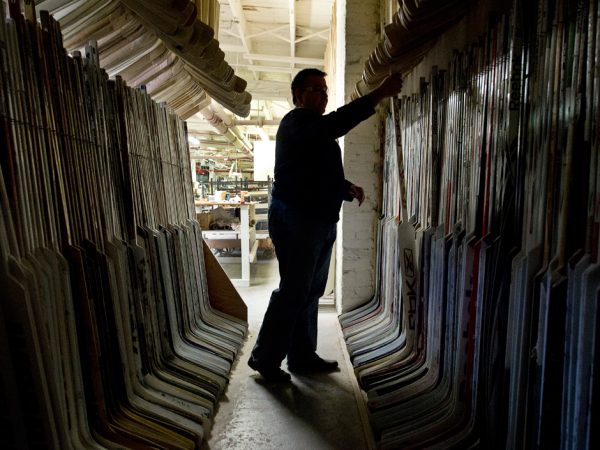 “If Heritage goes away, there’s a very likely chance that hockey sticks will never again be made in Canada,” says Roustan.

As for Roustan’s former company, he explains that Bauer is no longer a customer of Heritage, as the hockey equipment giant cut ties about a year ago.

He continues, “Both Bauer and CCM have abandoned the foam core goalie stick business. They are focused on the composite business, so sticks are all sourced out of China. Bauer and CCM have moved their acquisition of sticks to non-Canadian locations.”

Roustan says for current, past and future customers, a simple question needs to be posed. “What is the tone at the top?” He continues, “Do companies in Canada have a made-in-Canada philosophy at the board and the CEO level? If they don’t have it, then Heritage, and many other manufacturing companies in Canada, are simply out of business.”

He concludes, “If Heritage goes away, there’s a very likely chance that hockey sticks will never again be made in Canada. That’s a Canadian heritage issue. If this is the sport of Canada, we should be making hockey sticks in Canada.”