Calls to Conservatives are also including frank conversations about the debate raging over his leadership. 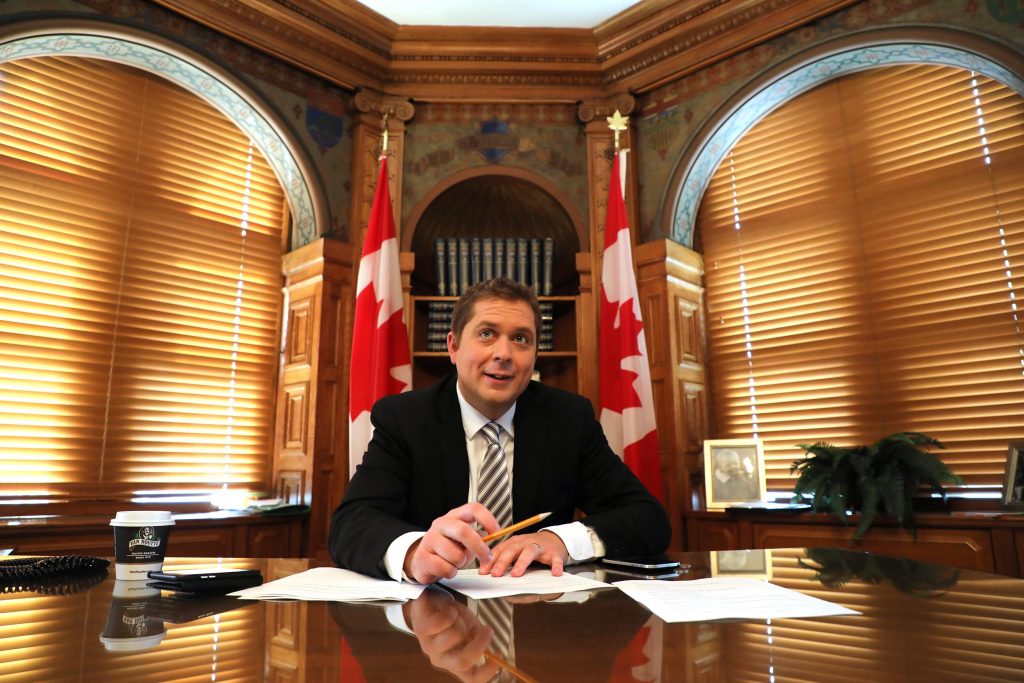 OTTAWA — Conservative Leader Andrew Scheer has been working the phones to line up the Opposition front benches as he gets set to reveal the team that will face off against the Liberal government starting next week.

First up on Nov. 28 is an announcement of his “leadership team,” the MPs who will marshal the Conservatives in Parliament. Later, he is to announce his picks for the Conservative shadow cabinet, which will include keeping some longtime critics in their roles and promoting other up-and-comers.

But the calls are also including frank conversations about the debate raging over his leadership, according to several people who have spoken with Scheer in recent days but were not given permission to disclose the content of the calls.

Two people from Scheer’s innermost circle – Hamish Marshall and Marc-Andre Leclerc – no longer have formal roles in guiding his political future. Marshall’s contract as the Conservatives’ national campaign manager has expired and Leclerc, who had been Scheer’s chief of staff, was fired over the weekend.

In addition to being his closest aides during the campaign, Marshall and Leclerc were instrumental in Scheer’s razor-thin win over rival Maxime Bernier after 13 rounds of voting in the 2017 Tory leadership race.

When Bernier later quit and formed his own party, much was made in Tory circles of the fact none of the MPs who backed him for the leadership followed him out the door. Scheer, it was argued at the time, clearly had kept the party together.

Those close to him now say the public airing of grievances that’s been sucking up all the political oxygen in recent days – the party showed weakly in Quebec, Scheer is too much a social conservative, he’s not socially conservative enough, the party has a communications problem, the party has a substance problem – is just a distraction. Scheer will make his case to party members over the next few months as to why he’s best to lead, said his spokesman Daniel Schow in a statement.

“Canada is in the middle of a national unity crisis. Justin Trudeau’s inaction on the devastating CN strike just cost the Canadian economy over a billion dollars, and Canada’s reputation on the world stage has never been worse,” Schow said.

“While some may be fascinated by internal party politics, Mr. Scheer and his team are busy preparing to hold Justin Trudeau to account when the House comes back on Dec. 5.”

Challenges to Scheer’s leadership, though, are coming from many directions, including from people who never quite supported him as leader in the first place and those who worked alongside him as recently as the last campaign.

Last week, Jamie Ellerton, who served on Scheer’s communication team during the election, co-wrote an op-ed published in the Globe and Mail calling on Scheer to set aside his “begrudging tolerance for marriage equality.”

“The Conservative party appears incapable of even offering table-stakes pleasantries to LGBTQ Canadians, while other cultural groups – be they religious, national or ethnic – command that respect without question,” the piece said.

It was a point of view endorsed by a former interim leader of the party, Rona Ambrose, who shared the essay widely.

Ellerton’s co-author was Melissa Lantsman, who worked on Doug Ford’s campaign for premier of Ontario, part of a group of conservatives almost completely sidelined during the recent election campaign.

Among them as well is Kory Teneycke, who for a time was the chief spokesman for former prime minister Stephen Harper, and who has called in recent days for Scheer to resign and run again in a competitive race for the party leadership.

He and other Tories have now launched a campaign aimed at galvanizing the grassroots against Scheer, collecting signatures via a website called Conservative Victory.

“When a political leader fails, they resign,” the website states. “Andrew Scheer should immediately step aside as the leader of the Conservative Party of Canada and run in a competitive race against a full field of contestants. It’s how we’ll get the best result.”

It’s the second such campaign launched since the end of the election. The first was a petition launched by young Conservatives immediately after Scheer failed to defeat Trudeau.

Teneycke ran Bernier’s leadership campaign, though has in the past proclaimed support for Scheer.

In Quebec then, Scheer’s support was softest in some key areas like Quebec City where this past fall, the Tories had hoped to elect MPs to Parliament.

But even among Quebec Tories who supported him from the get-go there is grumbling. In a social-media posting responding to an article in La Presse pondering Scheer’s fate, former Quebec MP Sylvie Boucher – who endorsed Scheer for the leadership – suggested he needs to have a think.

“In life,” she wrote in French, “you have to know how to retire with dignity. There’s no point holding onto a dream.”

To hold onto the party leadership, Scheer will have to win the support of delegates to the party’s April convention in Toronto, where he faces a mandatory leadership review after losing the election.

Each of the party’s riding associations will be able to send 10 people to vote on Scheer’s future, and all must be card-carrying members of the party. The delegates will be chosen by the party’s members.

Scheer’s choices for his shadow cabinet will be a key indication of how he hopes to earn their support.