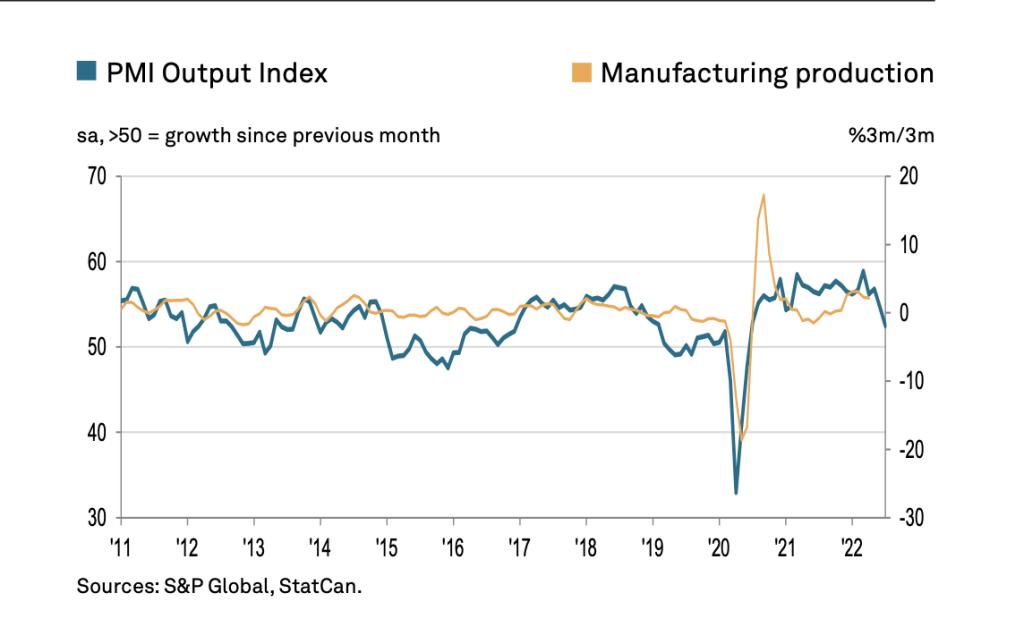 Canadian manufacturers saw another slowdown in July, with overall business conditions improving at the weakest rate for just over two years. The latest survey revealed renewed declines in output and new orders while employment growth softened. Export sales abroad fell to the greatest extent for 25 months.

The S&P Global Canada Manufacturing Purchasing Managers’ Index (PMI) registered at 52.5 in July, down from 54.6 in June. The latest reading signalled 25 continuous months of growth, though the improvement was the weakest in this sequence.

The two largest components of the PMI by weight – output and new orders – were behind the latest moderation. Both fell in July and for the first time in just over two years. Weak client demand amid sharply rising prices led to a decline in output in July. This signalled the first contraction since the outbreak of the pandemic in March-June 2020. The rate of decline was marginal, with around 17 per cent of firms recording a contraction while 14 per cent registered an increase in production levels.

“Firms continue to face sharply rising costs, which have been exacerbated by the war in Ukraine and lockdowns in China. Policymakers have reaffirmed their stance on tackling inflation by raising interest rates by a full percentage point last month,” said Shreeya Patel, economist, S&P Global Market. “Companies in Canada will hope price pressures continue to ease and demand from both international and domestic markets improves. In the meantime, firms remain cautiously optimistic about their 12-month outlook for output.”

With demand conditions subdued, firms concentrated their efforts on building post-production inventories which increased for the first time in 16 months. Backlogs meanwhile rose slightly, and at the joint-weakest pace for two years.

Selling prices charged for Canadian manufactured goods also rose sharply in July, but at a softer pace to that seen in June. The rate of inflation was the weakest since February, and below the average seen for 2022 so far.