Output growth sustained but inflationary pressures intensify in May: report 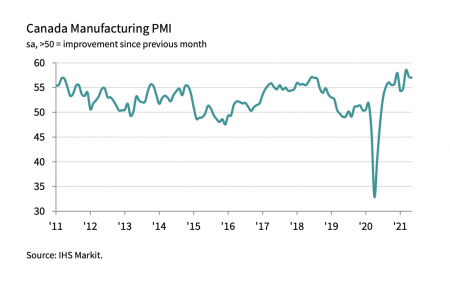 According to IHS, employment growth quickened to the sharpest in five months although there were further signs that sales volumes had outstripped production capacity, which resulted in another increase in backlogs. Supply chain disruption weighed slightly on output growth, with the latest deterioration in vendor performance the third most marked in the series so far, which began in October 2010.

Manufacturers reported solid growth in production volumes, although the rate of expansion moderated for the second consecutive month. Virus-related restrictions persisted in key regions, although some sectors were able to resume their operations, according to panel members.

Stretched operating capacity reflected insufficient workforce numbers and further supplier delivery delays. In a bid to reduce backlogs, firms added to their headcounts at the strongest rate since December 2020, which led to a softer rise in outstanding business. The overall rate of backlog accumulation was still solid.

Supply chains continued to be impacted by COVID-19 restrictions midway through the quarter. Vendor performance deteriorated at the third most marked rate in the ten-and-a-half-year history of the survey. As a result, firms sought to mitigate the effects of future delays by raising purchasing activity and adding to pre-production stockpiles.

Meanwhile, increasing capacity pressures and limited material availability made it difficult for firms to increase their post-production holdings. Stocks of finished goods were depleted for a second month in a row, with the latest fall solid.

On the price front, input prices rose at a sharp and accelerated pace, with the latest uptick the fifth-strongest in the series history.

“May PMI data reveals another robust expansion across Canada’s manufacturing sector with solid upticks in output and new orders registered,” said Shreeya Patel, Economist at IHS Markit. “Meanwhile, vendor performance continued to deteriorate in May. Lead times lengthened at the third- most marked rate in the near 11-year history of the survey, which has had knock on effects on prices and input availability. Raw material and transportation expenses soared, with firms rushing to adding to their stockpiles in a bid to offset future delays. A record increase in output prices suggests a large proportion of the burden was passed on to clients, but manufacturers will find the building inflationary pressures unsustainable.”