Procurement process could still be thrown into chaos because of ongoing lawsuit, rival company's lawyer warns. 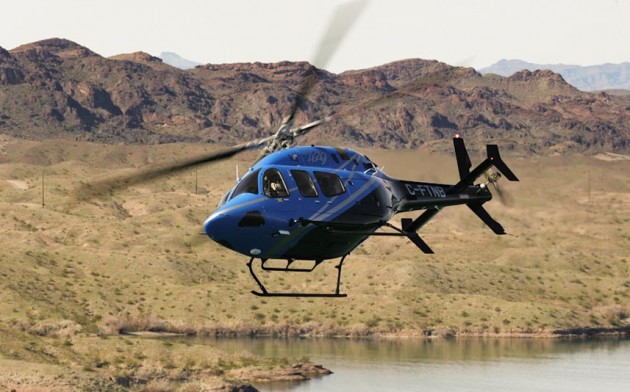 OTTAWA — The Harper government has awarded a contract worth up to $172 million for 15 light coast guard helicopters, despite facing a court challenge and accusations that the winner was given an unfair advantage.

Fisheries Minister Gail Shea and Infrastructure Minister Denis Lebel announced the deal with Bell Helicopter May 12, heralding it as a way to stimulate economic growth and create Canadian jobs.

Lebel called it an important win for Quebec, particularly the community of Mirabel, where the US helicopter giant operates a factory.

Shea says the purchase will support more than 200 direct and indirect jobs.

Buying new helicopters is important for coast guard operations on both coasts and in the North, she added.

Under the terms of the contract, the first of the Bell model 429 helicopters will start arriving a year from now, with one new helicopter delivered each month thereafter.

Airbus has a manufacturing plant in Fort Erie, Ont., and the company manufactured the current fleet of coast guard helicopters 25 years ago.

The accusation that specifications were rigged prompted both Airbus and AgustaWestland to pull out of the bidding, leaving only Bell. The absence of competition made the announcement a de facto sole-source arrangement.

The lawsuit is still grinding its way through Federal Court and is not expected to be heard until later this year or early next year.

The Harper government should have waited, since a judge could still declare the tender on which the contract is based null and void, throwing the entire procurement process into chaos, said Airbus lawyer Marc-Andre Fabien.

“The federal government legally had the right to award the contract in the actual state of the proceedings, but morally should have (restrained) itself from awarding it while the case about the validity of the (request for proposals) was pending,” Fabien said.

Bell would have qualified as a bidder for the contract had Transport Canada not granted the weight exemption, which experts and Airbus have argued puts the model 429 into an entirely different safety category.

“They clearly would not have had the contract awarded without the exemption for the aircraft,” Fabien said.

The exemption, which increased the maximum gross weight to 3,400 kilograms, was granted in December 2011. Under the category of light helicopters, the maximum rated weight is supposed to be 3,175 kilograms.

Documents from an Airbus court filing, part of the ongoing lawsuit, indicate the company is building its case around allegations that officials at Transport Canada were biased from the outset.

When the exemption was first being considered in the summer of 2010, an official at the department’s civil aviation directorate, Jim Thomson, wrote in an email that the “idea first came up about six months ago when the 429 was being considered a candidate for the new coast guard helicopter.”

The memo goes on to say that the chief pilot for Transport Canada’s Air Services directorate “called me saying the 429 would be a great aircraft for them if only the max gross weight could be increased by (226 kilograms) and how we could go about doing this,” Thomson wrote in June, 10, 2010.

In a subsequent affidavit, chief pilot Michael Laughlin disputed the contents of the email.

“While I do remember speaking to Mr. Thomson over the phone, I do not believe that this email accurately reflects what I said during this discussion,” he testified on Nov. 1, 2013.

No one at either the Public Works department or Transport Canada was immediately available for comment.