Hydra Energy to convert heavy-duty trucks to run on hydrogen 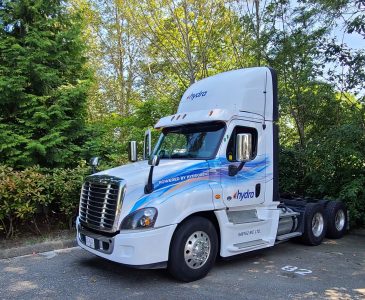 This funding is to support the further development of Hydra’s initial waste hydrogen capture plant in British Columbia, its fueling infrastructure, and conversion kits to accelerate hydrogen transport. This funding round brings Hydra’s total raised to date to $22 million.

“One of the most important industries to be decarbonized is transportation,” said David Batstone, Senior Managing Partner and Co-founder, Just Business. “We have full confidence in Hydra’s innovative technology and business model, which is why we invested in an early stage company. We believe that improving this traditionally diesel-heavy industry harnesses the potential of clean fuel now and will help pave the world for the hydrogen revolution in the future.”

Hydra’s plug-and-play dual-injection system injects this hydrogen directly into the truck’s air intake so that as it pulls for air, it also pulls for hydrogen. Hydra installs hydrogen-diesel co-combustion conversion kits, which are fully removable and reversible, into commercial fleet trucks within a few days, requiring no modification to the engine block.

“Hydrogen is no longer a fuel of the future. This funding brings Hydra closer to having 65 trucks on today’s roads that deliver significant fuel and emissions savings to our early users,” said Badr Abduljawad, Co-Founder and Chief Innovation Officer, Hydra Energy. “I co-founded Hydra to make low carbon hydrogen adoption scalable through a business model that’s affordable for fleets to implement. We are grateful to our new investor, Just Business, for supporting us in expanding this vision throughout North America.”