Spotlight was on its Alliston manufacturing facility, which recently produced its nine millionth vehicle. 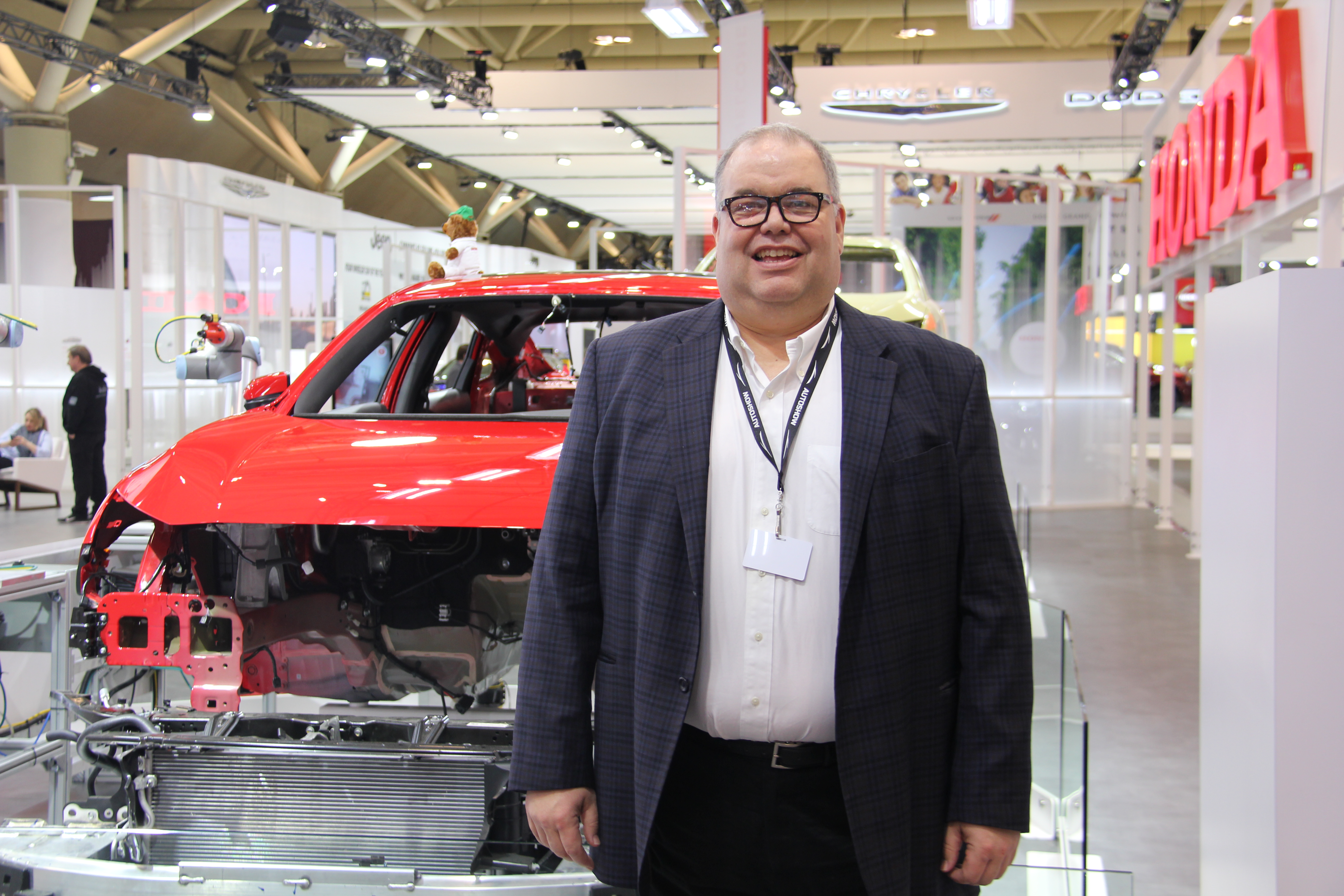 Honda of Canada Mfg. (HCM) put the spotlight on its manufacturing activities at the 2020 Canadian International AutoShow in Toronto with a dynamic exhibit featuring robots and half-constructed cars.

This is not what you typically see at an auto show. Kevin Mullins, HCM’s manager, administration, explained why.

“Honda has taken a different approach to the auto shows this year. Typically, it’s sparkly cars and some brochures, but we have a presence here from our manufacturing facility where we’re demonstrating some collaborative robots,” he said, emphasizing the need to deal with some of the public’s preconceived notions about manufacturing, and specifically about robots. “We’ve got two collaborative robots here and attendees are allowed to interact with them and see that there’s no risk, no danger and how helpful these collaborative robots can be.” 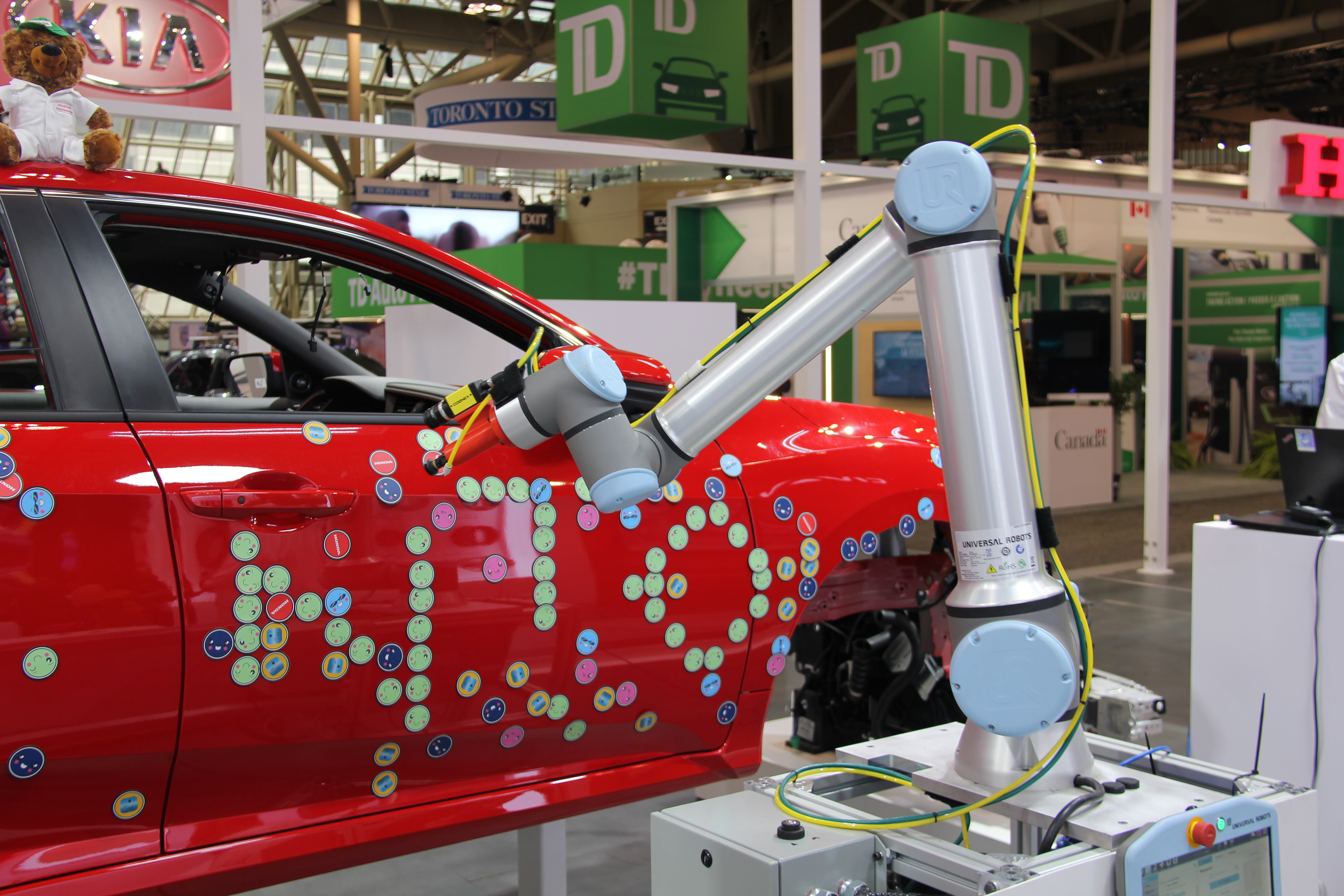 A robot demonstrates Honda of Canada Mfg.’s automation processes by slapping stickers on a half-constructed vehicle.

Much of the automation used in Alliston is there to help Honda’s associates, not eliminate their jobs, he said. “We will use the robots to lift heavy things and give them to us, rather than putting ourselves in those awkward situations.”

HCM’s Alliston, Ont. complex is the Japanese automaker’s only manufacturing presence in Canada, and the facility recently celebrated its nine millionth vehicle – a CR-V.

“Nine million is a significant milestone. When we started in 1986 with the Accord, we were making 150 a day. Now we have two lines, plus an engine plant … [and] our production has continued to grow [while remaining] stable at high numbers.” 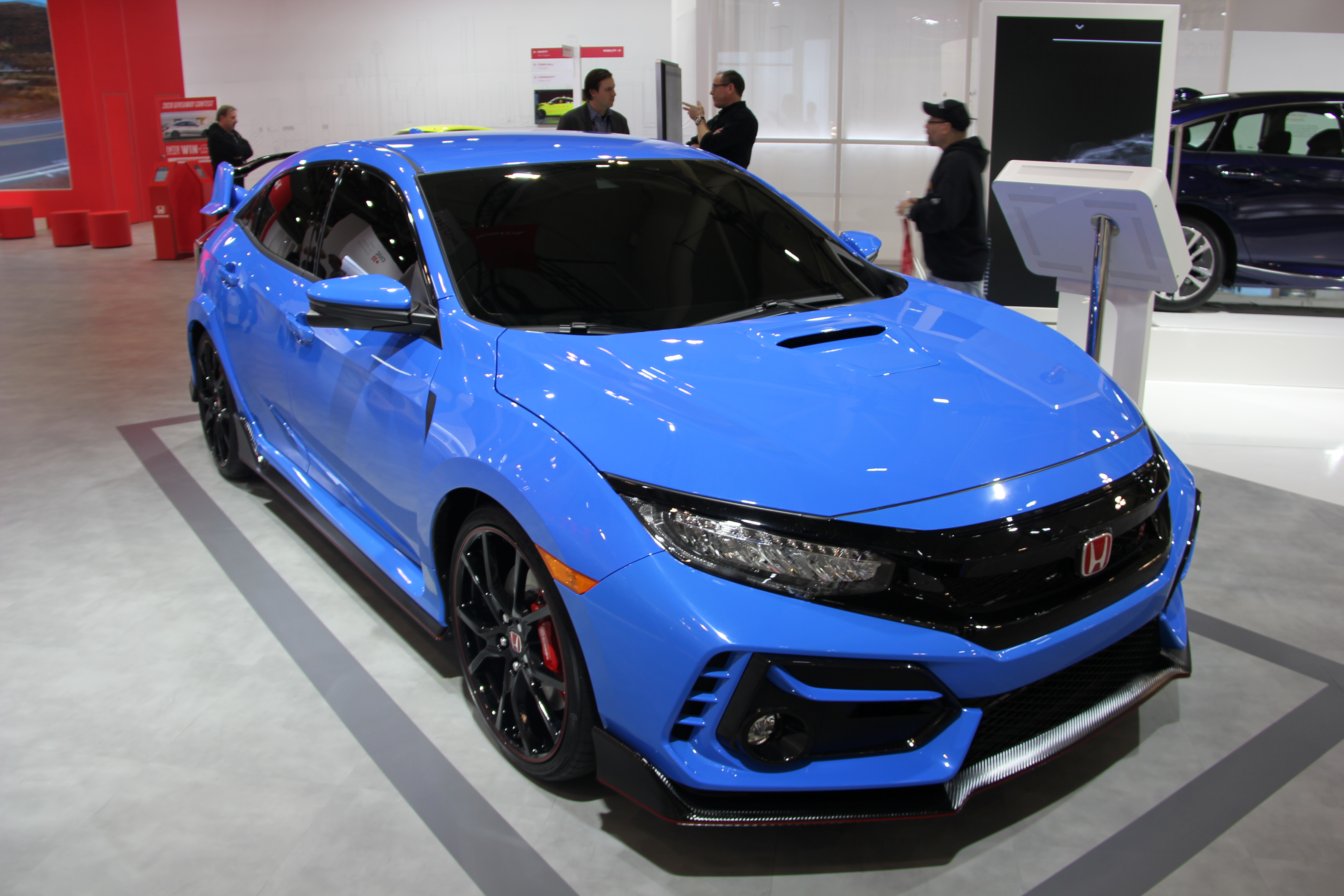 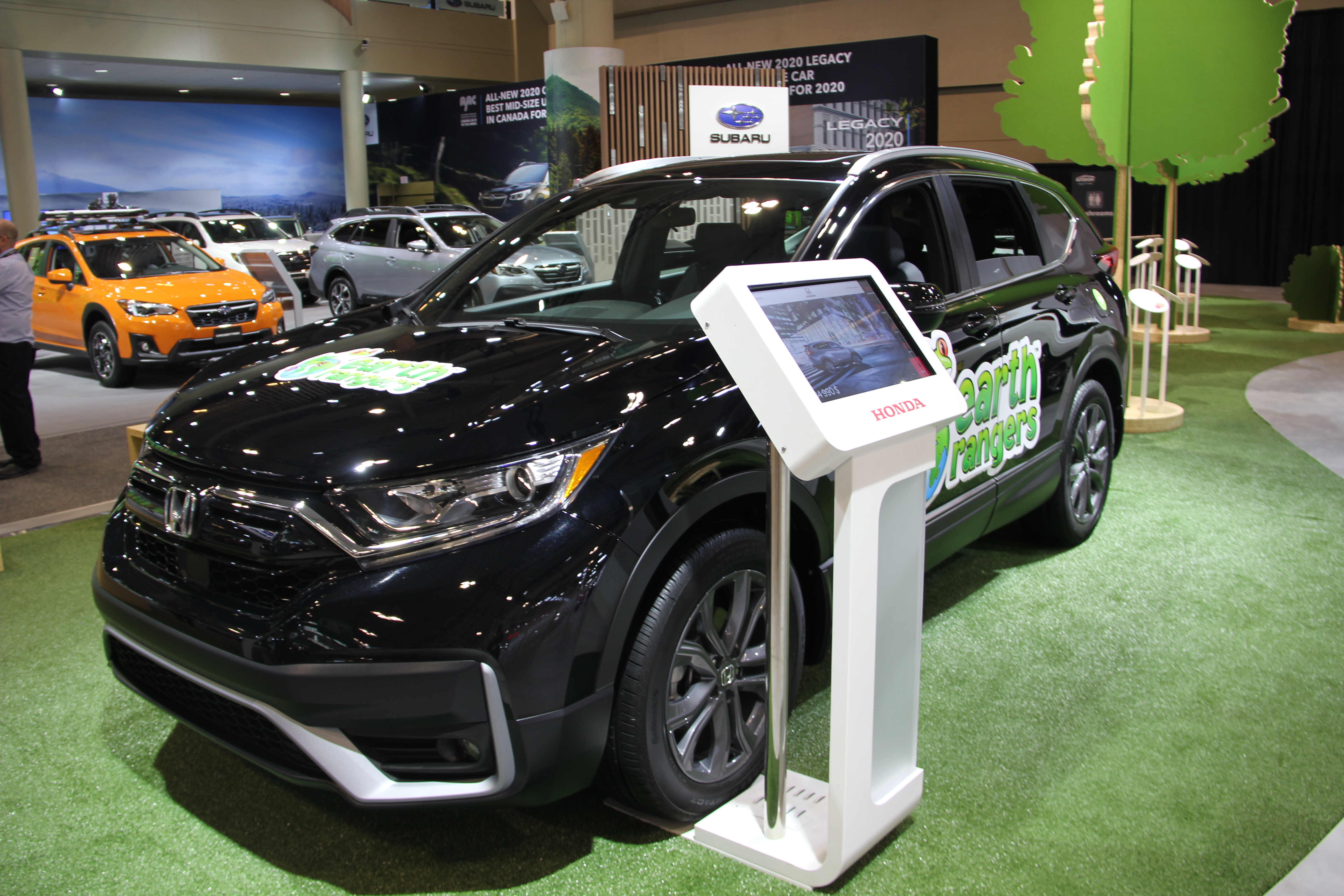 “Each line has its own body shop, weld and paint shop,” Mullins said. Common stamping and injection departments feed both lines, and the engine plant supplies Canadian production, but also exports.

“We’re very fortunate to have two products that are very good sellers,” Mullin said. We make the Civic on line 1 and that’s been Canada’s number one selling vehicle for 22 years in a row.”

He said HMC’s endurance as a productive facility and Honda’s $4.2 billion investment in its Canadian manufacturing show the automaker’s commitment to Canada, the province and the local community.

“I was born and raised in the area, and I was young when they announced the plant. There are studies that show for every one job Honda creates, there’s at least seven more created in that local community. That’s parts suppliers, but it’s also transportation companies, schools, gas stations and grocery stores. The amount of growth in that area has seen has been significant.”

Why has HCM endured and thrived while other North American auto plants have downsized or closed down? Mullins credits the associates. “We’ve got a very engaged, active group. Because of their efforts and ideas, we’ve been able to implement a lot of different things that separate us from a lot of companies.” 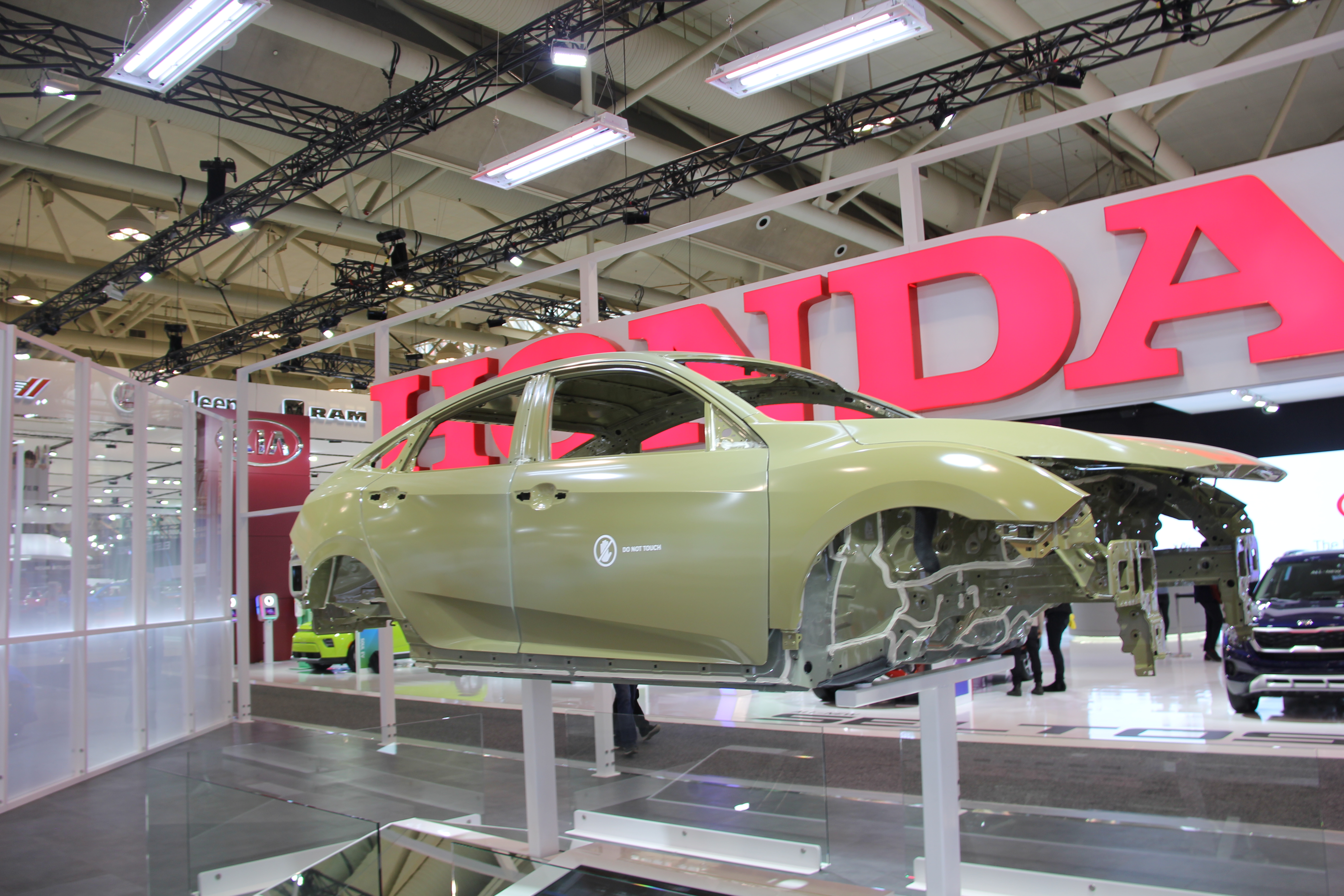 The facility’s safety record and quality results are “excellent,” he noted. “We’ve received awards for that …It’s the work of the whole team that has really secured our future.”

That future includes hiring. “We’re lucky to have a lot of people who have been with us for 30 years,” Mullins said. “More than 300 people a year for the past three years have been retiring, so that’s causing a significant opportunity for us.”

Mullins said the plant is preparing for future models as well, but not details yet. Stay tuned.