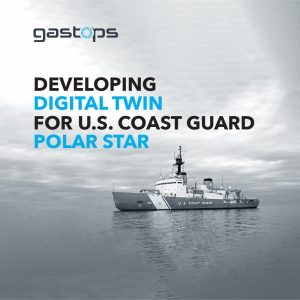 This contract has been made possible through a partnership with the Canadian Commercial Corporation (CCC).

The Polar Star is the Coast Guard’s only heavy icebreaker. The ship travels to Antarctica to lead Operation Deep Freeze every year, routinely breaking miles of ice over 20 feet thick. It is powered by diesel electric and three aviation-grade gas turbines, which provide up to 75,000 horsepower.

The PSDRA will create a computer simulation model of the ship’s current propulsion system; a digital twin that will become the baseline for modelling and assessing proposed modifications to support a five-year Service Life Extension Program for the Polar Star.

The Gastops PSDRA will generate an understanding of the performance and stability of the as-proposed propulsion plant in steady state and transient state, during open water and icebreaking operations, to validate the performance of new equipment, its integration into the existing propulsion systems, and its control algorithms.