Includes five electric vehicles for Oakville and an engine contract that could yield new jobs in Windsor. 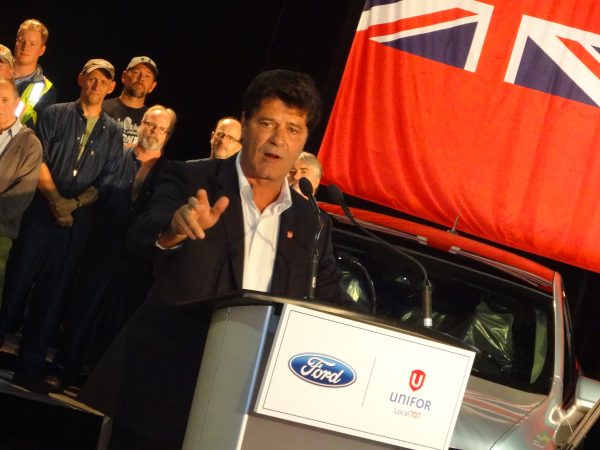 Under the proposed settlement, Unifor national president Jerry Dias said $1.95 billion will be invested in Ford’s Canadian plants, including $1.8 billion toward the production of five electric vehicles in Oakville, Ont., and an engine contract that could yield new jobs in Windsor, Ont.

The 6,300 union workers at Ford will vote on the deal this weekend, Dias said.

Talks between the union and the automaker came to a head on Sept. 21 ahead of a bargaining deadline of 11:59 p.m. ET, and talks continued for much of the night before parties settled on a deal around 5 a.m.

Workers had voted to support a strike if a deal could not be reached, with the future of the Oakville plant potentially on the line amid the end of the Ford Edge production.

The plant will now be retooled for electric vehicle production starting in 2024, Dias said, with the fifth and final model of the new deal hitting the assembly line in 2028.

Of the 4,250 Unifor workers at the plant west of Toronto, 3,400 are actively working (and not laid off or on leave.) Dias said he foresees about 3,000 jobs staying in Oakville under the new contract, but said that some of the current workers would be eligible to retire soon either way.

“This is a major commitment from Ford,” Dias said. “This is going to be a key facility, not for the short-term, but for the long-term, this is a decade-long commitment.”

Dias thanked local and federal politicians for support during the negotiations. When asked about government contribution toward electric vehicle production, Dias declined to confirm earlier news reports on the topic, saying the government will have to announce how much they plan to kick in.

Ontario Premier Doug Ford has said that the province is contributing a “massive amount” to “businesses like (Ford Canada) to bring battery manufacturing” to the province, but has not shared a specific amount, citing ongoing negotiations. John Power, spokesman for federal Industry Minister Navdeep Bains, also declined to say how much Ottawa could commit, saying only that electric vehicle production would help meet climate goals and create jobs.

“We have been talking for decades about having a national auto strategy in this country, and for some reason, we can never seem to get everybody in the room at the same time,” Dias said.

“Over the last several months, those walls have really been torn down. I’m really pleased to see that the federal government and provincial government are working hand in hand.”

Dias said that the provincial government’s negotiations encompass the complete, A-to-Z manufacturing of batteries – a process that still requires a major manufacturer. Unifor’s deal with Ford will encompass just the assembly stage of the manufacturing process.

Once agreed to by union members, Ford’s deal on new product lines, shifts, wages, pensions and benefits will set the tone for upcoming talks with Fiat Chrysler Automobiles and General Motors.

Dias said Fiat Chrysler will be next in line for negotiations, as the union plans to go toe-to-toe over shift cuts in Windsor and Brampton, Ont. facilities.

Although the last formal labour negotiations took place in 2016, the union has been in active scrimmages with GM since then, after last year’s downsizing at a GM plant in Oshawa, Ont.

In the US, GM’s union workers went on strike last year. Going forward, Dias said the Canadian and US unions will negotiate with the Detroit Three on the same schedule, as both groups try to keep jobs from moving south to Mexico.

That means the 2020 deal will be renegotiated in 2023, amid the expiration of major programs in GM’s powertrain operation in St. Catharines, Ont.

Dias said Canadian natural resources, such as lithium, aluminum and cobalt, put the members in a strong position as more companies move toward electric vehicles.

“It’s an opportunity for our young people that work in Oakville, and frankly in Windsor, as well, and throughout the other operations, to sit back and say, `With this announcement I can buy a house, I can plan my future, I can plan a family,”’ Dias said.

“It really is about young people being able to plan 20 years ahead, which will make a significant difference in their life.”