Merged company would make some 8.7 million vehicles a year, leapfrogging GM and trailing only Volkswagen and Toyota. 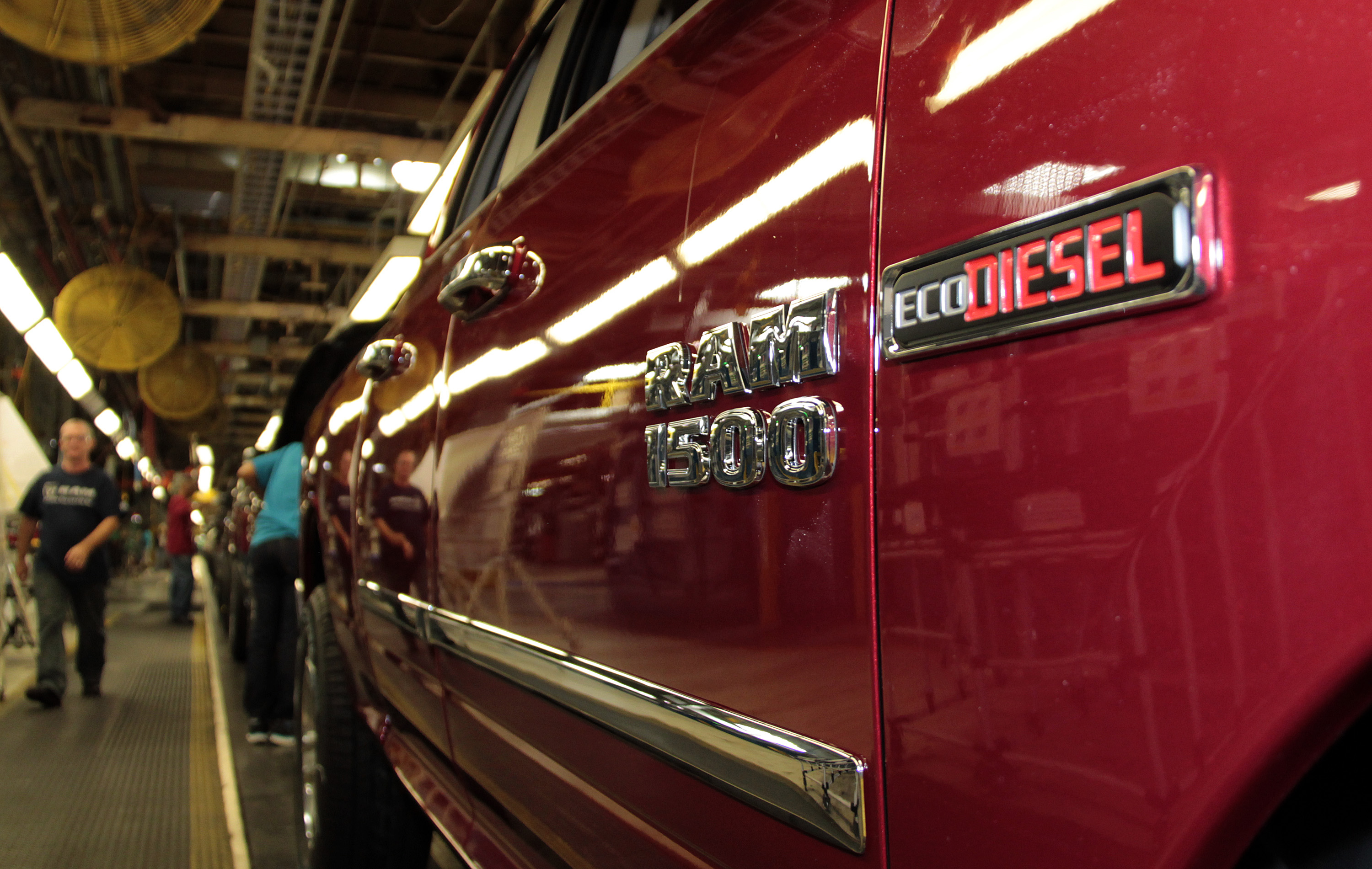 Ram 1500 EcoDiesel coming off the line at Warren Truck Assembly Plant. Fiat Chrysler is stronger in the US and SUV markets.
Photo: FCA

PARIS — Fiat Chrysler proposed on May 27 to merge with France’s Renault to create the world’s third-biggest automaker, worth US$40 billion, and combine forces in the race to make electric and autonomous vehicles.

The merged company would reshape the global industry: it would produce some 8.7 million vehicles a year, leapfrogging General Motors and trailing only Volkswagen and Toyota.

Shares of both companies jumped on the news of the offer, which would see each side’s shareholders split ownership in the new manufacturer.

Renault welcomed what it called a “friendly” offer. The company’s board met May 27 at its headquarters outside Paris and said afterward that Renault will study the proposal “with interest.” In a statement, Renault said such a fusion could “improve Renault’s industrial footprint and be a generator of additional value for the Alliance” with Japan’s Nissan and Mitsubishi.

Fiat Chrysler’s offer comes at a key moment for Renault. The French manufacturer had wanted to merge fully with Nissan, but those plans were derailed by the arrest of boss Carlos Ghosn on financial misconduct charges in Japan.

Now, questions are growing over the Renault-Nissan-Mitsubishi alliance , which together make more passenger cars than any one company. While Fiat Chrysler says the merger with Renault would accommodate the alliance and lead to savings for them, it is unclear how the Japanese companies might react in the longer term to being tied to a much larger partner.

Automakers have collaborated more in recent years as they come under pressure to invest heavily in developing electric cars, self-driving vehicles and in-car connectivity. Regulators, particularly in Europe and China, are pushing automakers to produce electric vehicles and meet tougher climate change regulations, pressure that only grew after scandals over the amount of pollutants emitted by gas and diesel-powered engines.

A deal would save 5 billion euros ($5.6 billion) a year for the merged companies by sharing research, purchasing costs and other activities, Fiat Chrysler said. It promised the deal would involve no plant closures, but it didn’t address potential job cuts.

Together, they would be worth almost 37 billion euros ($40 billion). Fiat Chrysler, which includes the holding company of the founding Agnelli family with a 29% stake, proposed that its shareholders get a 2.5 billion euro ($2.8 billion) special dividend because of Fiat Chrysler’s higher market value.

“This operation will bring benefits to both countries,” Fiat Chrysler Chairman John Elkann told reporters in Italy, noting that it had been 10 years since Fiat’s takeover of bankrupt Chrysler, in exchange for small-car technology and management know-how.

The car market has shifted dramatically in the meantime, with Fiat Chrysler abandoning small cars in the United States in favour of SUVs.

Analysts at financial firm Jefferies said it was “hard to disagree with the logic” of the deal, as there is a strong fit in the markets each company covers and the brands they offer.

“The elephant in the room is who will run the entity,” analysts Philippe Houchois and Himanshu Agarwal wrote in a note to investors.

Mergers of equals can be difficult to manage over questions of who gets the top leadership positions and which brands are promoted and invested in most. A tie-up between Daimler and Chrysler in the 1990s was billed as a merger of equals, but it eventually collapsed amid cultural differences and recriminations.

Investors were nevertheless enthusiastic about Fiat Chrysler’s plan, pushing the company’s shares up 8% and Renault’s 12%.

The French government, which owns 15% of Renault, said it is “favourable” to the idea of a merger but wants to study the conditions more carefully, especially in terms of “Renault’s industrial development” and employees’ working conditions, government spokeswoman Sibeth Ndiaye said. “We need giants to be built in Europe.”

Ghosn’s legal problems in Japan have left Renault vulnerable . Ferdinand Dudenhoeffer, head of the CAR automotive research centre at the Duisburg-Essen University, said Ghosn’s plans to merge Renault with Nissan-Mitsubishi had “little appeal” for the Japanese.

He noted that Renault’s sales represented just 36% of 2018 alliance sales – and the Japanese didn’t want to see the French carmaker drive a merger with those numbers.

A Renault merger with Fiat Chrysler, however, could strengthen both companies’ positions and put pressure on smaller companies like Ford in Europe.

The merger idea is the biggest corporate move so far by Fiat Chrysler CEO Mike Manley, who took his position after the unexpected death last year of the charismatic leader Sergio Marchionne.

What happens to jobs is likely to be a source of concern.

France’s influential CGT union warned against cuts and said it wants the French government to retain a blocking stake in any new company.

“We know that when there is talk of a merger … at the end, it’s the employees who are paying the high price for it – loss of jobs, having to compete with others around,” said Fabien Gache of the CGT.

Matteo Salvini, the leader of Italy’s rightwing populist League party and the deputy premier, said that “if Fiat grows, it is good news for Italy and Italians,” though he warned a deal should protect “every single job.”

In Tokyo, Nissan CEO Hiroto Saikawa wouldn’t comment directly on the merger idea but said, “I am always open to exchanging constructive views on strengthening the alliance.”

The merger will be complicated because the combined company would involve operations in the US and multiple European countries and Renault’s “eroding alliance” with two Japanese carmakers, said Karl Brauer, the executive publisher of Kelley Blue Book and Autotrader.

“It’s a powerful combination in theory,” he said, “but aiming for a single, aligned automotive entity, with everyone rowing in the same direction, might not be realistic.”