Democrats swarm industrial Iowa to prove they can beat Trump 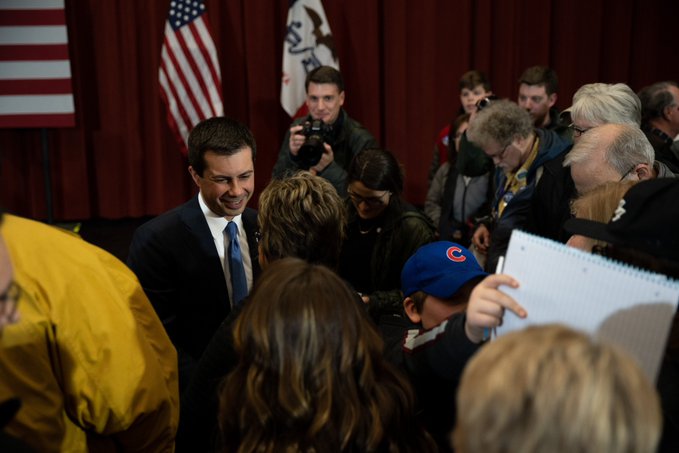 Pete Buttigieg and his fellow Democratic candidates are hoping to win voters for the upcoming Iowa caucuses. PHOTO: Pete Buttigieg/Twitter

MOUNT PLEASANT, Iowa — Since their surprise loss to Donald Trump in 2016, Democrats have struggled with how to regain territory that long supported the party before suddenly flipping to Republicans. Their answer could lie with voters like Martie Boyd.

The 71-year-old retired insurance worker is a lifelong Republican who supported Trump for president in 2016 but says she won’t do it again. Even better for Democrats, she lives in Danville, a tiny town in Des Moines County, one of 31 Iowa counties that backed Barack Obama in 2012 before switching to Trump.

“I wish I hadn’t wasted my vote,” Boyd said Jan. 21 after watching Pete Buttigieg speak at Iowa Wesleyan University. “Not this time. I’m definitely caucusing for a Democrat and voting for one in the fall.”

As Buttigieg campaigned throughout this swath of southeast Iowa, voters like Boyd were at the front of his mind. He and his fellow Democratic candidates are hoping to lure them not just to win the upcoming Iowa caucuses but to prove to voters in the states that follow that they have the unique ability to win in places that shifted from the Democrat Obama to the Republican Trump.

“I’m not only meeting fellow Democrats who have been working hard for that day here, but independents who can’t wait for that day and an awful lot of what I like to call future former Republicans who are more than welcome to join us,” Buttigieg said at Iowa Wesleyan.

Iowa is home to more counties that pivoted from Obama to Trump than any other state. And over the past month alone, White House hopefuls have made more than a dozen stops in these counties to prove they’re serious about defeating Trump.

“The No. 1 issue on caucus-goers’ minds is who is the best candidate to take on Trump, and campaigning in these counties that switched from Obama to Trump is a good way to show that you’re that candidate,” said Jeff Link, who advised Obama’s successful 2008 Iowa campaign.

The vast majority of these counties are in eastern Iowa and follow a pattern concentrated throughout the upper Midwest, including southeast Minnesota, southwest Wisconsin and northwest Illinois. These regions cover either once-thriving industrial river counties or those whose economies fed and depended on them.

In Iowa, they hug the Mississippi River beginning north of Dubuque County and wind southward to include once-robust industrial river hubs where the big equipment manufacturing that fueled the economy has dwindled with the population. The ensuing anxiety has been a major driver of the partisan shift, according to Norm Sterzenbach, a veteran Iowa strategist who is advising Minnesota Sen. Amy Klobuchar’s campaign in the state.

“There’s a changing of demographics in some of these counties, there’s a decline in population, there’s a loss in the manufacturing sector, the growing income disparity between blue-collar workers and CEOs and executives—so a number of those things led to voters feeling frustrated and wanting change,” he said.

But part of the problem, Sterzenbach said, was that the party took many of these ancestral Democratic areas for granted. “As Democrats, we haven’t done a great job at communicating our message to these voters in a way that shows that we understand what they’re going through,” he said.

That’s what Buttigieg was aiming to do with his latest Iowa campaign swing. which focused entirely on the state’s 2nd Congressional District. Ten of Iowa’s 31 pivot counties are clustered in the district, and the opportunity for candidates campaigning in the region is twofold: The 2nd District accounts for a little under one-sixth of the overall delegates awarded on caucus night.

Dave Loebsack, a Democrat who represents Iowa’s 2nd Congressional District, has endorsed Buttigieg and introduced him across Iowa this week. He noted the possible general election advantage of campaigning across the 2nd District, where he says Democrats have a 20,000-voter registration advantage. He argued that by visiting these struggling cities during the caucus campaign, which offers disproportionate attention than a general election campaign, some Trump-voting Democrats can be brought back into the fold.

“This is a part of the state, just like parts of Wisconsin, Michigan and Pennsylvania, where a number of Democrats, far too many, became disaffected and voted for Trump,” Loebsack said. “And I think there’s some chance to get some of them back.”

Beyond Buttigieg, rivals Klobuchar, Elizabeth Warren, Joe Biden and Bernie Sanders have also swung through these counties in recent weeks, making the similar case that they’re the most electable candidate in a general election.

Klobuchar spent part of the weekend in Clinton County, which went from supporting Obama by nearly 23 percentage points to backing Trump by 5 points. She touted the county as a place where Democrats can “make up ground,” and emphasized the need for Democrats to stay “focused on an optimistic economic agenda for this country.”

In a pitch to potential swing voters, Klobuchar also downplayed policy differences between the two parties.

“When you look at this election, for some people who may not agree with everything we’ve said, it’s a patriotism check for them, it’s a decency check, it’s a values check,” she said.