Former PM died peacefully in his sleep at home in Toronto on Sept. 18 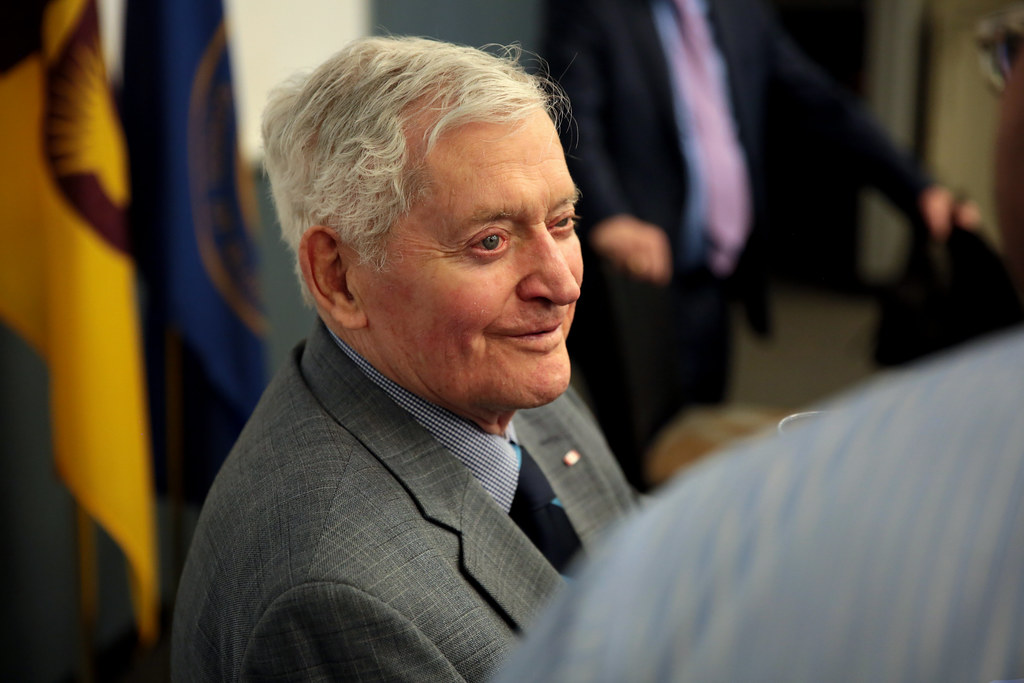 TORONTO — Former prime minister John Turner, whose odyssey from a “Liberal dream in motion” to a political anachronism spanned 30 years, has died at the age of 91.

Marc Kealey, a former aide speaking on behalf of Turner’s relatives as a family friend, says Turner died peacefully in his sleep at home in Toronto on Sept. 18.

“He’s in a much better place, and I can say on behalf of the family there was no struggle and it was very, very peaceful,” Kealey said.

Politicians and other public figures immediately began sharing memories of Turner and expressing condolences to his family.

“Mr. Turner was a humble man with a strong social conscience. He supported many charitable organizations, including Mount Sinai Hospital in Toronto. He was also an honorary director of World Wildlife Fund Canada and an ardent advocate for the protection of Canada’s lakes and rivers.”

Conservative Leader Erin O’Toole also offered his condolences, writing on Facebook, “Track star, lawyer, parliamentarian, but most importantly father and patriot, his contributions to Canada are profound and his legacy assured.”

“More than anything, John was a House of Commons man and an outstanding public servant. He revered our democratic institutions like no other and served his constituents and Canada with great distinction. He will be greatly missed. My sincere condolences go out to his wife Geills and to his family,” Chretien wrote.

Smart, athletic and blessed with movie-star good looks, Turner was dubbed “Canada’s Kennedy” when he first arrived in Ottawa in the 1960s. But he failed to live up to the great expectations of his early career, governing for just 79 days after a difficult, decades-long climb to the top job.

“The most unfortunate thing to happen to anybody is to come in at the top in politics,” Turner said in 1967.

His words were prophetic.

Despite his missteps, Turner guided the Liberals through some of their darkest days in the 1980s. His right-of-centre contribution to party policy would help pave the way for fiscally conservative prime ministers Chretien — his longtime rival — and Martin.

Turner’s journey began as a dashing young politician with the world at his feet and ended nearly 30 years later when he could no longer overcome his image as a relic of the past.

There was a dichotomy to Turner’s life. He was a jock who studied at Oxford and the Sorbonne, a staunch Catholic who defended the decriminalization of abortion and homosexuality and a Bay Street lawyer who campaigned against free trade — describing it as the fight of his life.

“There were two Turners. There was the thoughtful, intelligent John Turner who was kind of an intellectual,” former aide Ray Heard said in an interview several years ago.

“But there was another side to him. … There was John the jock, who used to love watching NFL football with us, who sometimes drank too much, who used to put on his red cardigan and sit in his office having a good time,” he said.

Born in England, John Napier Wyndham Turner emigrated to Canada in 1932 after the premature death of his father Leonard.

His young, well-educated and driven mother, Phyllis Gregory, moved the family to her hometown of Rossland, B.C., and then to Ottawa a year later, where she climbed to the top ranks of the civil service.

An Olympic-calibre track star, Turner graduated from the University of British Columbia in 1949, winning the Rhodes scholarship to Oxford University. After studying law, he went to Paris to work on a doctorate at the Sorbonne.

The young lawyer caused a stir when he danced with Princess Margaret at a party in 1959, giving rise to speculation that the two would become a couple. Heard said the two remained friends for life.

Turner moved to Montreal to practice law but was lured into politics by Liberal cabinet minister C.D. Howe, who asked him to help in an election campaign. Turner won a seat in 1962, representing the Quebec riding of St-Laurent-St-Georges.

He would later hold seats in two other provinces, Ontario and British Columbia, a feat unmatched since William Lyon Mackenzie King.

In 1965, he was named to cabinet by Lester Pearson, as a minister without portfolio. Two years later, Chretien and Pierre Trudeau joined cabinet, with Trudeau landing the plum post of attorney general and minister of justice. Turner toiled in the unglamorous job of registrar general, while Chretien languished with no portfolio.

It foreshadowed a rivalry that would divide the men in the years to come.

He once compared his job to that of a hockey star.

But Turner was well-liked on Parliament Hill, playing squash with opposition members and once, walking across the House of Commons to comfort a New Democrat who had just confessed to having a serious criminal record.

He saved then-Opposition leader John Diefenbaker from drowning while on vacation in Barbados, having unintentionally booked a stay at the same resort.

He married Geills McCrae Kilgour, the great-niece of Col. John McCrae who wrote “In Flanders Fields” and the sister of longtime MP David Kilgour, in 1963.

The two had a daughter, Elizabeth, and three sons, David, Michael and Andrew.

Turner ran to succeed Pearson in 1968, but lost to Pierre Trudeau. Even when it was all but certain he would lose, Turner stubbornly stayed in the race until the fourth and final ballot.

As justice minister in Trudeau’s cabinet between 1968 and 1972, Turner proposed a national legal aid system — an issue close to his heart — and created the Federal Court, among other reforms. But he was also put in difficult positions that sometimes challenged his personal beliefs.

He defended martial law and the suspension of civil liberties during the October Crisis of 1970, as well as the decriminalization of homosexuality and abortion in the 1960s.

“Those of us who support the bill recognize that there are areas of private behaviour which, however repugnant, however immoral, if they do not directly involve public order, should not properly be within the criminal law of Canada,” he said at the time.

He was named finance minister in 1972 and held the job for three turbulent years, marked by high unemployment and high rates of inflation. He left politics in 1975, which some believed was over his opposition to Trudeau’s decision to implement wage and price controls after the 1974 election.

Turner spent nearly a decade as a corporate lawyer on Bay Street before returning to politics after Trudeau resigned.

He won the 1984 Liberal leadership race, a divisive contest that pitted Turner against Chretien. The rift their rivalry created within the Liberal ranks plagued Turner for the rest of his career.

“Chretien and his people launched, almost from Day 1, a war of attrition against John Turner,” said Heard.

“Chretien’s people kept stabbing him in the back. They had coups and counter-coups going on. I spent more time dealing with caucus revolts inspired by the Chretien people than I spent opposing Brian Mulroney and his government. It was a ludicrous situation.”

Turner triggered an election just nine days after being sworn into office, forgoing the chance — some say foolishly — to host a visit by the Queen and another by the Pope that would have given the new prime minister golden opportunities for glowing, wall-to-wall media coverage.

The campaign was a disaster. The party wasn’t prepared to run a campaign and was mired in organizational problems. Chretien’s supporters were staging caucus revolts. And Trudeau’s parting gift — patronage appointments — would be Turner’s undoing.

But his outdated sensibilities landed him in trouble too, when he was filmed patting the rear end of Liberal party president Iona Campagnolo, who patted his bottom right back.

However, it made Turner look sexist and out of touch, and his unrepentant defence — calling himself a “tactile politician” and dismissing it as a joke — didn’t help matters.

The breaking point came during the 1984 election debate, when Turner was forced to defend Trudeau’s appointments, saying he had no option but approve them.

But he won a seat in Vancouver and led the Opposition Liberals for six more years.

The 1988 election provided a rematch with Mulroney over the Canada-US free trade agreement, which Turner vehemently opposed, later calling it the fight of his life.

He triumphed in the debates, eloquently turning free trade into a referendum on Canadian sovereignty. But he faced mutiny from senior Liberals who wanted to dump him mid-campaign and choose another leader.

Turner didn’t win, but the Liberals recovered, doubling their seats in the House of Commons. He resigned in 1990 and quit politics three years later, joining a Toronto law firm.

Despite his declining health, he was a mainstay at many Liberal events. He gave speeches reminding the party of its golden years, sprinkled with wild stories about life on the political trail.

Throughout his political career, he stuck to his convictions, took up unexpected causes — like legal aid and free trade — and kept the Liberals together during some of their darkest days.

Bad timing stopped Turner from realizing his full potential as a great prime minister. In the end, the public tired of him before he reached the top.