Canada plans $3.6B in retaliatory tariffs on U.S. in aluminium dispute

Freeland says the tariffs will match dollar-for-dollar the costs of the planned 10% import tariff on Canadian raw aluminum that will apply starting Aug. 16 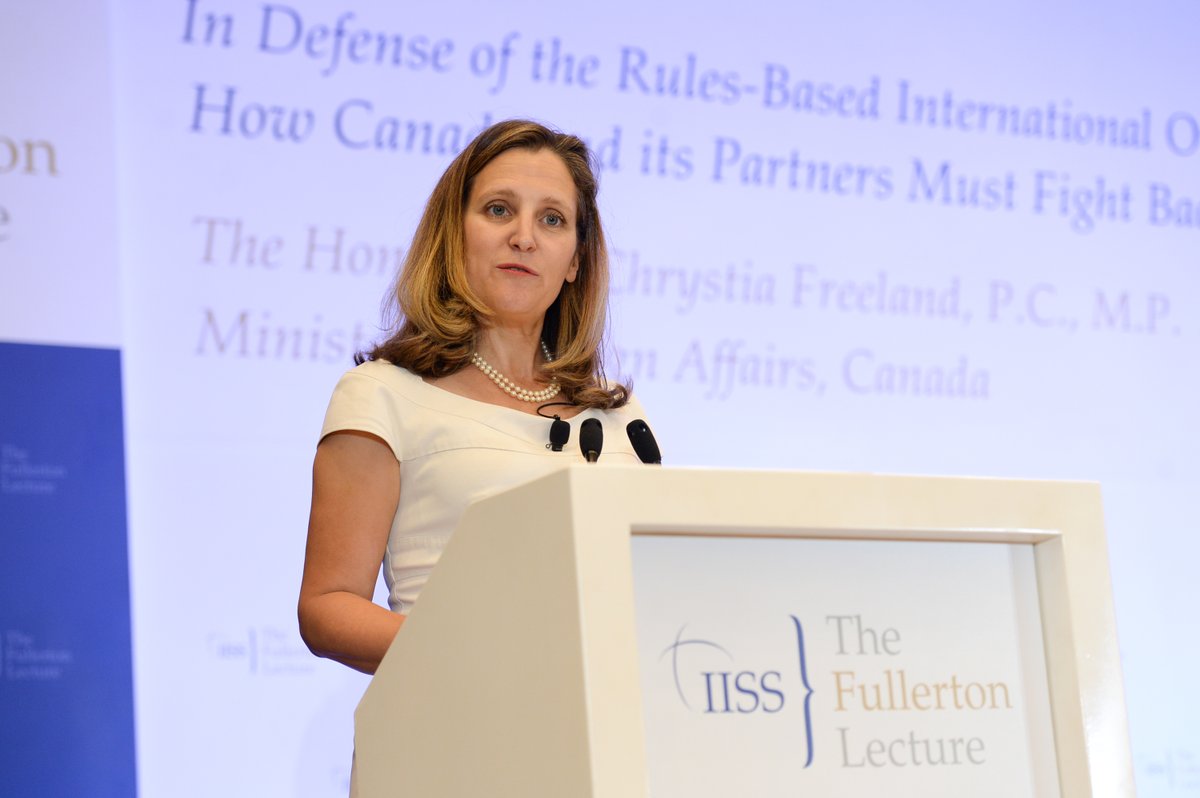 OTTAWA — Deputy Prime Minister Chrystia Freeland says Canada will hit back against U.S. tariffs on Canadian aluminum with $3.6 billion in tariffs of our own.

Freeland says the tariffs will match dollar-for-dollar the costs of the planned 10% import tariff on Canadian raw aluminum that will apply starting Aug. 16.

President Donald Trump accuses Canada of breaking a promise not to flood the U.S. market with aluminum, an accusation Canada and its aluminum producers say is completely false.

Freeland says Ottawa has a long list of U.S. products containing aluminum to possibly target for the retaliation, including washing machines, golf clubs and exercise equipment.

She says the government will spend the next 30 days consulting with the domestic industry to determine which items on the list will end up being targeted.

Freeland says the goal is to inflict the least damage on Canada while having the “strongest possible impact” on the United States.

An earlier story is continued below:

OTTAWA — The Trudeau government is promising to impose retaliatory tariffs on American products after U.S. President Donald Trump announced Aug. 6 he is restoring an import tax on raw aluminum from Canada later this month.

She called Trump’s decision to reimpose tariffs on Canadian aluminum “unwarranted and unacceptable” and suggested his timing couldn’t be worse.

“In the time of a global pandemic and an economic crisis, the last thing Canadian and American workers need is new tariffs that will raise costs for manufacturers and consumers, impede the free flow of trade and hurt provincial and state economies.”

Freeland noted that the new Canada-United States-Mexico Agreement that replaced NAFTA went into force on July 1, including a provision that ensures 70% of aluminum purchased by North American automakers must be produced in North America.

She argued that the trade deal partners should be using the new deal to “advance North American competitiveness — not hinder it.”

Details of the counter-tariffs Canada intends to impose are to be announced “shortly,” the statement said. Freeland is to hold a news conference about the aluminum tariffs on Friday morning.

The U.S. previously imposed the same tariff between June 1, 2018, and May 17, 2019, along with a 25% import tariff on Canadian steel. Canada retaliated with $16.6 billion in tariffs on U.S. products, including ketchup, ballpoint pens, licorice, orange juice, whisky and toilet paper.

At the time, Canada focused on products that would cause pain in electoral districts held by key Republicans, something that could be done again given the U.S. election is only three months away.

During a speech at a Whirlpool manufacturing plant in the battleground state of Ohio, Trump accused Canada of breaking a promise not to flood the U.S. market with the Canadian metal.

“Canada was taking advantage of us, as usual,” Trump said.

“The aluminum business was being decimated by Canada, very unfair to our jobs and our great aluminum workers.”

Trump said on the advice of U.S. Trade Representative Robert Lighthizer he signed a proclamation earlier in the day to put a 10% tariff back on raw aluminum from Canada as of Aug. 16.

Jean Simard, president of the Aluminium Association of Canada, said the decision will destabilize Canada’s industry and supply chains in an already shaky economy that is struggling under the weight of the COVID-19 pandemic.

Canada is not flooding the U.S. market, he said, and the only thing the tariffs will do is cause U.S. consumers to pay more for anything containing aluminum.

He said Canada needs “to hit back, dollar for dollar” at the very least on U.S. products containing aluminum. He said that could also extend beyond aluminum.

“I think we’re going to ponder the possibilities in the coming weeks and see what is on the one hand reasonable and on the other hand can be painful,” Simard said.

Calls for retaliation were echoed by the Canadian Chamber of Commerce and the United Steelworkers union.

Trump said his administration had only agreed to lift the original tariffs in 2019 because Canada promised it would not “flood our country with exports and kill all our aluminum jobs, which is exactly what they did.”

“Canadian aluminum producers have broken that commitment,” he said.

The American Primary Aluminum Association — made up of two U.S. metal companies, Century Aluminum and Magnitude 7 Metals — have lobbied the White House to restore the tariffs and on Thursday officials with the companies thanked Trump for listening.

“The decisive action taken today by the Trump Administration will help save America’s primary aluminum industry which has been decimated by an unprecedented surge of Canadian primary aluminum imports,” said Mark Duffy, CEO of the association, in a written statement.

Simard, however, said the American companies are getting U.S. consumers to subsidize their plants to keep running, rather than taking steps to modernize their production to make them more competitive. He said the U.S. is picking and choosing numbers to support their argument but in reality, Canadian exports to the U.S. have fallen in the last year, and there is no surge in exports or production from this side of the border.

“We’re not surprised but we’re disappointed because it’s totally misguided,” he said.

The U.S. association claims raw aluminum exports from Canada went up 95% over the last 12 months. Trump’s proclamation stated that they were up 87% between June 2019 and May 2020.

But Simard said overall exports to the U.S. have fallen in the last year. Raw exports went up because of COVID-19, but value-added products used by auto companies to make cars fell off a cliff. When COVID-19 shut down the economy, auto assembly lines were stopped, and all orders from Canada for aluminum parts were cancelled.

But Simard said smelters can’t just stop running so they switched to producing raw product which was exported to U.S. warehouses for storage. He said the material is then released over time to fill demand later on.

As the assembly lines started moving again, the export balance began to restore in June and July. The Aluminium Association of Canada said raw exports fell 16% in June, and 30% in July.

The spectre of the tariffs being reapplied has hung over Canada’s aluminum industry for more than a month, and was the subject of a conversation between Prime Minister Justin Trudeau and Trump in mid-July.

On July 8, Trudeau said he does not understand why Trump would even be considering restoring the tariffs. He said the U.S. doesn’t make enough aluminum to meet its own need, both economies were struggling under the weight of the pandemic, and tariffs would simply raise prices for U.S. manufacturers.

U.S. appliance companies like Whirlpool, where Trump chose to make his announcement Thursday, were forced to raise prices in 2019 because of the previous steel and aluminum tariffs.

Reactions to the news:

Some key events in Canada-U.S. trade relations since 2018:

U.S. President Donald Trump announces plans to reimpose a 10% tariff on Canadian aluminum, saying “Canada was taking advantage of us, as usual.” The tariff had previously been suspended in 2019.

The United States-Mexico-Canada Agreement, an update to the North American Free Trade Agreement in place since 1994, takes effect.

A U.S. watchdog criticized the way the Trump administration handles taxes on imported steel and aluminum, saying a lack of transparency on the tariffs imposed in March 2018 creates the appearance of “improper influence.”

Canada and the U.S. reach an agreement that ends the 25% tariff on steel and 10% levy on aluminum that had been in place for most of the previous year. Canada had said the measures stood in the way of ratifying the new NAFTA agreement.

The U.S announces tariffs of 25% on imports of Canadian steel and 10% on aluminum to take effect the next day (Canada and the European Union had previously been exempt from wide-ranging protectionist measures launched by Trump; lack of progress in NAFTA renegotiations was cited by Washington as the reason for the tariffs).

In retaliation, Canada later the same day announces plans to impose taxes of up to $16.6 billion on steel, aluminum and hundreds of other products from the U.S.