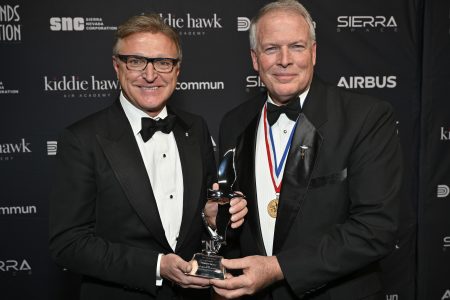 CAE’s President and Chief Executive Officer, Marc Parent, was honoured with the Living Legends of Aviation’s award, the Industry Leader of the Year Award.

Living Legends of Aviation is an aviation recognition event, hosted by John Travolta and held in Beverly Hills, California.

“I am truly honoured to be recognized by the Living Legends of Aviation and join men and women who have made significant contributions to our industry,” said Parent. “My professional journey has been enormously fulfilling. At a time when we need to encourage young people to pursue a career in aviation, especially as pilots, I hope the stories of today’s aviation Legends inspire the next generation to take to the skies and become the Legends of tomorrow.”

Parent joined CAE in 2005 and became President and CEO in 2009. In the early 2000s, he ran Bombardier’s U.S. Operations, including the Learjet manufacturing facility, and was then appointed vice-president and general manager of the Challenger and CRJ aircraft programs.