The deal just needs Trump's signature to be fully approved in the U.S. 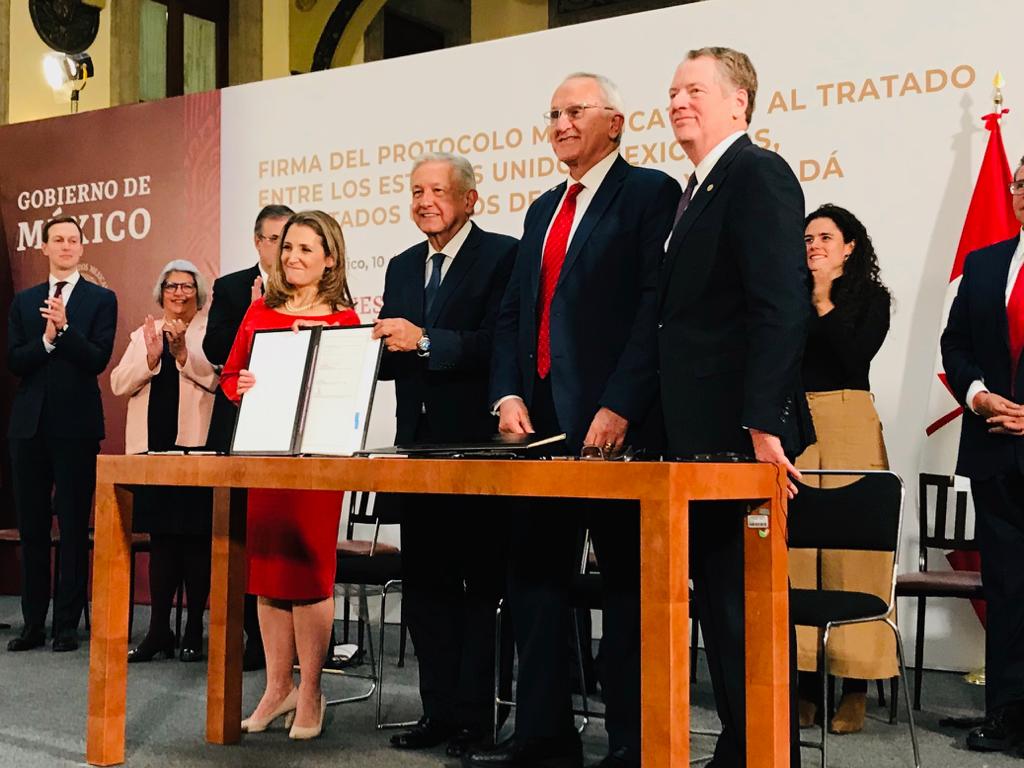 After passing the Democrat-controlled House of Representatives last month, the so-called implementation bill—the nuts and bolts of precisely how the U.S.-Mexico-Canada Agreement will be executed, followed and enforced—cruised through the Senate by a margin of 89-10.

Short of the president’s signature, which is expected as early as next week, the focus now shifts back to Canada.

The federal Liberal government has been waiting for legislative progress on the American front before introducing its own implementation bill. Mexico ratified the deal back in June.

Officials in the Prime Minister’s Office say they expect the agreement to be high on the government’s agenda when Parliament resumes Jan. 27, and that the Canadian legislation is ready to be introduced in the House of Commons.

Despite the impending impeachment trial casting long shadows on Capitol Hill, Thursday’s vote marked a long-sought win for Trump’s trade agenda, his second in as many days. On Wednesday, he signed the first phase of what he’s billed as a two-part comprehensive trade agreement with China, with Phase 2 not expected until after the November election.

Trump’s long-standing promise to improve on the existing North American Free Trade Agreement was a major cornerstone of his 2016 election win, particularly in parts of the country where farmers and blue-collar workers have blamed their economic struggles on the relentless march of global trade and the exodus of manufacturing jobs to China and Mexico.

“Quite a week of substantive accomplishments for the nation, for the president and for our international trade,” Senate Majority Leader Mitch McConnell said prior to the vote.

Robert Lighthizer, Trump’s top trade diplomat and chief negotiator on the deal, declared that “a new chapter in U.S. trade policy has begun” and that the agreement “the new gold standard against which all future trade agreements will be judged.”

The agreement will bring more manufacturing jobs to the United States, enforce labour and environmental standards, and give innovative American industries an advantage, he said in a statement. And it contains a “sunset” provision that will give the U.S. leverage to bend the agreement further in the future, he said.

“It will enable us to help investors to make decisions without concerns around agreements that need to be made,” Morneau said Thursday in Calgary.

Not everyone supports the USMCA, however: Democratic Sen. Chuck Schumer of New York and Independent Vermont Sen. Bernie Sanders voted against it, both of them citing the fact the deal does nothing to address climate change.

That’s despite a concerted effort by congressional Democrats led by House Speaker Nancy Pelosi to negotiate an implementation bill that would be more palatable to more progressive lawmakers, including significant changes to how the agreement’s stringent new labour standards are enforced.

Pelosi has described the latest version as “light years” better than the original version of the trilateral agreement.

Asked about the dissenting votes, Morneau said there will be always be differing points of view, before suggesting that is something the Liberals will have to contend with in Ottawa too.

“We’re encouraged that the U.S. has ratified this, now obviously we need to move forward with our own approach to quickly getting this ratified, recognizing that we need to engage with Parliament to do that,” he said.

The new trade era could come into force in either early May or June, depending on precisely when Canada approves it, said Dan Ujczo, an international trade lawyer and U.S.-Canada expert with Dickinson Wright in Columbus, Ohio.

“Our guidance to companies remains the same: USMCA is real; it is not a rebrand but a renovation of North American trade; and the time is now to focus on impacts,” Ujczo said.

“If there is any confusion that this is the same old NAFTA, keep in mind Democrats are overwhelmingly supporting this deal while impeaching the president. Clearly, there are differences in USMCA that have got these Democrats on board and those largely are not trade-friendly changes.”

The International Trade Commission projected in April that after six years, the agreement would boost the U.S. economy by $68 billion and some 176,000 jobs, particularly in the auto industry, where the USMCA rewrites the rules governing the amount of foreign-sourced metals and components can be used in cars built in America.