Sandy Thomson is recognized for his polymer bearing innovations. 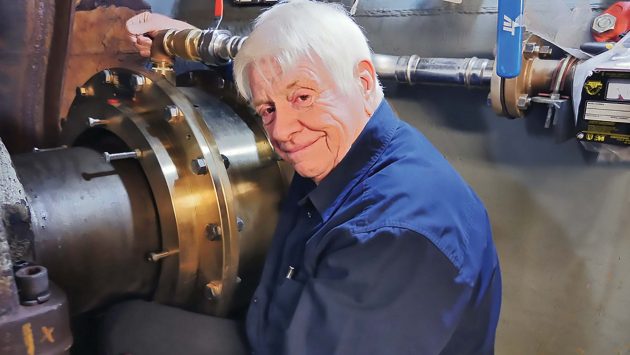 In the bearing world there are some global brands that come to mind such as SKF in Sweden NTN in Japan and Timken in the US, but Canada has it’s own innovative player and its patriarch has been awarded the global transportation sector’s most distinguished accolade.

Thordon Bearings’ founder and polymer materials pioneer George (Sandy) Thomson is the 2019 recipient of the Elmer A. Sperry Award for “advancing the art of transportation,” joining luminaries such as Donald Douglas, Ferdinand Porsche, Sir Geoffrey De Havilland and Malcolm McLean.

Established in 1955, the award commemorates the life of Elmer A. Sperry, whose creations include the gyroscope, the first electric automobile and navigational aids that contributed to the advancement of many modes of transportation.

“To be presented with this prize is a testament to the talent and dedication of all those working tirelessly within the company to develop safer, more environmentally friendly solutions for all sectors of industry,” said the 81-year-old Thomson. “It’s our material scientists, technologists and engineers – some of the best in the world – that must take all the credit.”

Humble though he is, Thomson deserves the recognition. If not for him and two colleagues, there would be no Thordon polymer bearings.

A native of Burlington, Ont., he graduated from Northrop University in Inglewood, Calif. and graduated as a mechanical engineer. After a brief stint working for a Boston based mechanical seal manufacturer, he returned to Canada to join Thomson-Gordon Ltd. in the 1960s, founded by his grandfather in 1911.

After several prototypes prior to 1967, the world’s first polymer alloy bearing was installed in a vertical pump at a local steel plant, replacing traditional rubber bearings that typically wore out within a few weeks.

His attention shifted to the marine market and Lake Ontario where the bearing was tested in horizontal applications. The world’s first Thordon water-lubricated propeller shaft bearing was installed on a Great Lakes tug owned by McKeil Marine in Hamilton in the late 1970s. Today McKeil is the largest tug/barge owner on the Great Lakes.

Aside from durability, there’s a significant environmental benefit to the Thordon product. Because it’s lubricated with seawater, the bearing eliminates a major cause of ocean pollution – oil and grease leaked from conventionally lubricated tailshafts.

The company’s pollution-free polymer materials have been used in many other maritime applications, including rudder bearings, deck machinery, dredger cutterhead bearings and floating production storage and offloading vessel turret and mooring equipment.

And Thomson continues to find opportunities for his polymer technology. He formed Marsh Brothers Aviation to provide aircraft solutions, among them the AeroTough GF, a self-lubricating polymer (that replaces greased nickel-bronze bushings), and ThorFlex elastomeric polymer seals. These materials are also long-lasting self-lubricating, cleaner and weigh significantly less than the alternatives. All were developed and tested on his personal Aerostar aircraft.

Clean power generation is his latest interest. Thordon Bearings’ sister company, TG-DNALOP purchased a small hydro facility in Poland, which is acting as a demonstration site for Thordon’s water-lubricated bearings and seals in a new generation of Kaplan turbines for the renewables industry.

The company, located on a commercial-industrial road in Burlington, operates from a 70,000 square-foot plant where 114 team members are employed and continue the founder’s quest for innovation.

This is an edited version of a longer article contributed by Thordon Bearings.