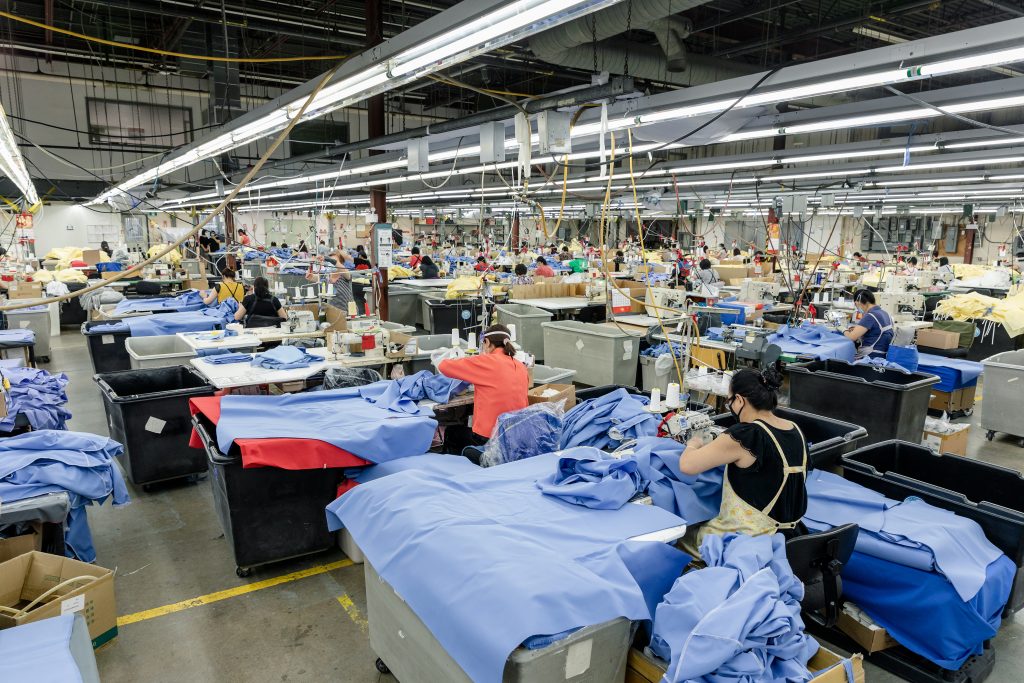 When the pandemic was declared in March 2020, many countries around the world were left scrambling for personal protective equipment (PPE) for its frontline workers – especially for healthcare workers bravely risking their well-being to treat people suffering from COVID-19.

When Esther Vlessing saw Canada’s healthcare sector struggling for PPE, she decided to utilize her skills and experience in the fashion industry and start up Canada Emergency Medical Manufacturers (CEMM) in Concord, Ont., which has supplied reusable isolation gowns that have served approximately 75 million uses in hospitals, long-term care homes, and COVID-19 testing centres.

“Things from overseas were taking exorbitant amounts of time to get here. So, we were working with various government bodies and the largest hospital networks around the country and in Ontario. It was so important to set up a strong domestic supply chain,” said Vlessing, President, CEMM.
Prior to starting up CEMM, Vlessing built and scaled the national clothing line, Arctic Trim, which was sold at retailers and big box stores nationwide, including Sporting Life. Afterwards, she took a position at Canada Goose, working in materials research on the company’s design team. So, her experience was well-suited to this role. 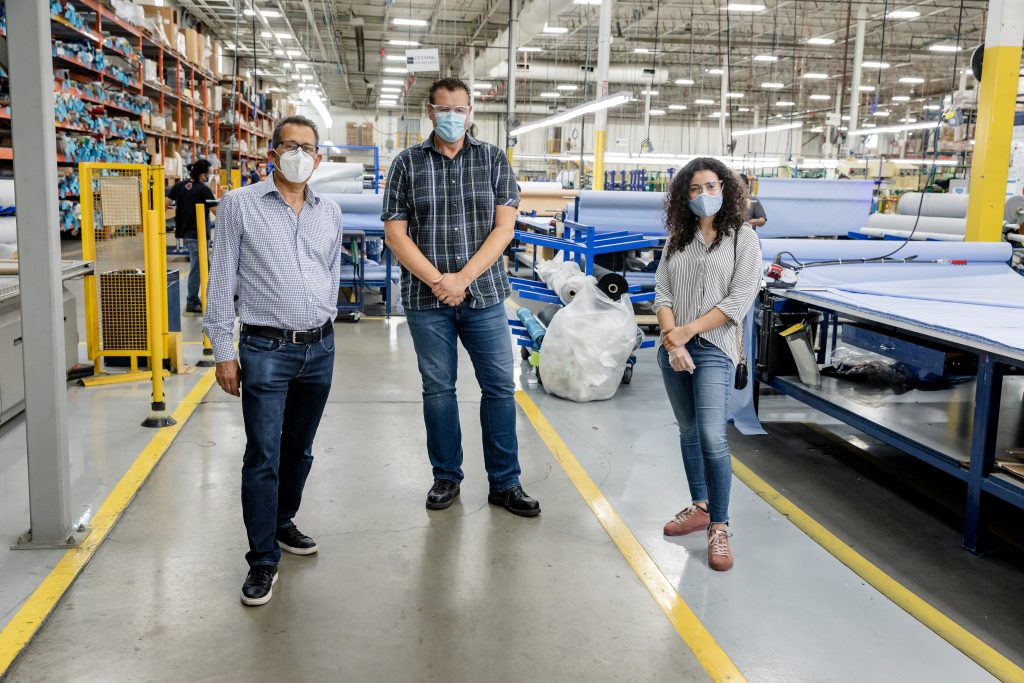 Vlessing also received help from her father, Robert Vlessing (CEMM Chairman of the Board), and his connections in the furniture manufacturing industry. Her father ran his own company, Coja Leatherline of Canada, until it was sold in 2008, then went on to work in leather sales developing strong relationships in the sector. Vlessing was able to tap into his existing manufacturing network and its labour force during the economic slowdown generated by the pandemic.

“When the pandemic hit, we were able to utilize his rolodex from years in the industry and invite the largest domestic furniture manufacturers to join the CEMM initiative,” she said. “I was able to do the same in the apparel sector.”

After setting up her plan, Vlessing contacted the Ontario Deputy Minister’s Office and Department of Economic Trade and Development in Canada, and laid out her idea to execute a nationwide emergency manufacturing response unit. After receiving approval, and a multi-million-dollar purchase order, Vlessing and her team quickly got to work setting up manufacturing operations and developing their supply chain. CEMM purchased new equipment for the onboarded factories, provided design specs and raw materials, and trained them in the new product.

“This is how we built what became CEMM’s manufacturing network,” said Vlessing. “The key ingredient was that the largest fabric mills that service furniture companies hadn’t made that type of fabric before. We told them we need them to switch over, and that took a good amount of time, before they were certified for their medical fabrics.”

But once the materials were approved, things got moving fairly quickly.

When Esther Vlessing saw Canada’s healthcare sector struggling for PPE, she decided to utilize her skills and experience in the fashion industry and start up Canada Emergency Medical Manufacturers (CEMM) in Concord, Ont., which has supplied reusable isolation gowns that have served approximately 75 million uses in hospitals, long-term care homes, and COVID-19 testing centres.

“The very first week after getting our first purchase order, we delivered our first 5,000 units in April. We were able to hit 60,000 units, then 70,000, and then 80,000 isolation gowns per week delivered to Ontario Health and government bodies, hospitals and long-term care homes,” said Vlessing.

But those weren’t the only people positively affected by the startup of CEMM. All the manufacturers that the company tapped into to create these gowns felt a big impact.

“We were able to activate over 500 domestic jobs and keep them active. They would have otherwise been shut down,” said Vlessing. “We kept things local.”

To help CEMM produce medical gowns to the necessary specifications, Vlessing and her father reached out to a leading producer of the gowns and they were happy to assist. 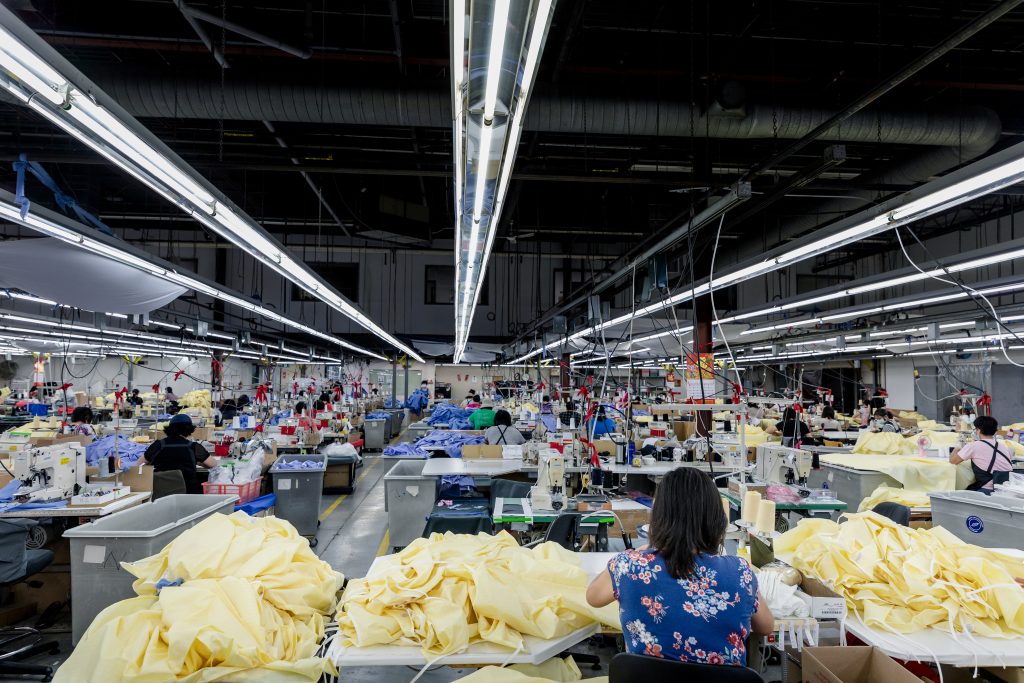 “In March, we were asked to become experts in specific medical gowns that would be worn in COVID-19 wards, so my father and I reached out to the leading producer of these garments and spoke to the president. They said, ‘We are at capacity and booked for the next year or two and can’t make anymore.’ So, they were willing to share their know-how, their intellectual property with us and their testing,” said Vlessing. “It speaks to partnership on so many levels. Something that came up a lot is that this is not business as usual. We were there to save lives and we needed to be working our 18- to 19-hour days, because it wasn’t a regular situation. We needed people to be good humans and share what they normally wouldn’t share.”

“We had to be very strategic on how to source them, because all of a sudden you’re making something very real, and you can’t be running out,” said Vlessing. “It was interesting to see that those lead times for such simple things were starting to grow.”

Speaking of growth, CEMM is continuing to grow and currently employs seven people at its head office and works with over two dozen manufacturers to ensure it has a secure supply chain.

“I view ourselves as the logistical mobilizers of Ontario’s furniture, apparel and automotive sectors towards a common goal: making PPE for our country,” said Vlessing.

And by helping ensure there is a steady supply of medical gowns heading to frontline workers, Vlessing and her company are helping ensure a success story, not only for CEMM, but for all Canadians.
__________________
Andrew Snook is a freelance B2B magazine editor and writer based in the Toronto area.