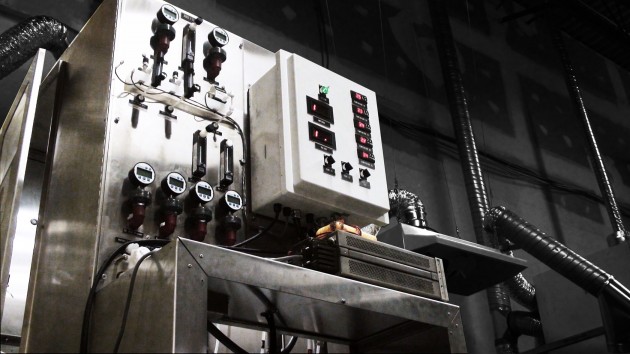 Ontario’s energy minister Bob Chiarelli announced in December that the province would extend the phasing-in of wind, solar and bioenergy to an estimated 10,700 megawatts by 2021 and continue diversifying its energy mix to lower its reliance on nuclear power. By 2025, the government expects half of Ontario’s installed generating capacity to come from renewable sources.

But there’s a problem with adding renewable capacity: storing energy when the wind isn’t blowing or the sun isn’t shining.
“Energy storage is needed badly. When the wind isn’t blowing, you can’t rely on wind power. When the sun isn’t shining, you can’t depend on solar,” says Larry Kristoff, president of Mantra Venture Group Ltd. “We’re not just wasting energy, we’re compromising power grids and costing conventional power producers a lot of money because they have to slow down or shut down their operations.”

Mantra is confident it has a solution to the energy storage shortfall: a relatively low-cost swiss-roll fuel cell system, originally developed by UBC professor, Colin Oloman.

“Talk to anyone in the renewable energy world and they’d agree that energy storage in the next big thing in that industry. It’s at a point where you can’t add capacity without enough energy storage,” says Patrick Dodd, Mantra’s chief technology officer.

Mantra Energy Alternatives Ltd., a Vancouver-based clean technology incubator and subsidiary of Mantra Venture Group, has developed its mixed-reactant fuel cell (MRFC) with the University of British Columbia (UBC) and with funding from the Clean Energy Research Centre and the Natural Science and Engineering Research Council of Canada (NSERC).

The company says the technology has the potential to reduce the complexity and costs of fuel cells because MRFC is platinum-and membrane-free, and doesn’t require any platinum-based electro catalysts. This eliminates the need for expensive and failure-prone electrolyte membranes and bulky bipolar plates.

Because there’s no membrane, Mantra says cost reductions of up to 68% over conventional fuel-cells are achievable. Another cost reduction of 25% is achieved because there aren’t any heavy flow plates.

In conventional fuel cells, the fuel and oxidant flow in separate streams and are kept apart by an ion-conducting membrane that divides the cell into anode and cathode chambers.

Mantra’s MRFC employs a mixture of fuel and oxidant flows through the cell as a single stream, allowing for a variety of conventional cell stack designs. This simplification is possible because the fuel cells operate without the gastight structures within the stack that are required for sealing, manifolding and separating reactant delivery in conventional cells.

It also integrates with another Mantra technology developed by Oloman and acquired by Mantra in 2008. Electro reduction of carbon dioxide (ERC) would fuel the MRFC by converting CO2 emissions into salable chemicals (and clean energy), such as formic acid.

“We’re trying to convert CO2 from high emissions industries into a fuel source that produces electricity,” says Amin Aziznia, the company’s process engineer. “There’s not enough platinum on earth to do that.”

If successful, the deployment of Mantra’s technology would be timely in Ontario where wind energy production has doubled over the last four years to 5.2 terawatt hours, according to the province’s Independent Electricity System Operator (IESO).

And 3,300 megawatts of renewable energy has been committed to Ontario’s electricity grid by the spring of 2015, making the need for storage capabilities increasingly imminent.

From the January 2014 issue of PLANT.