Mobile canning: filling a need in the craft beer market

West Coast Canning takes its filling line on the road, serving brewers in Alberta and BC. 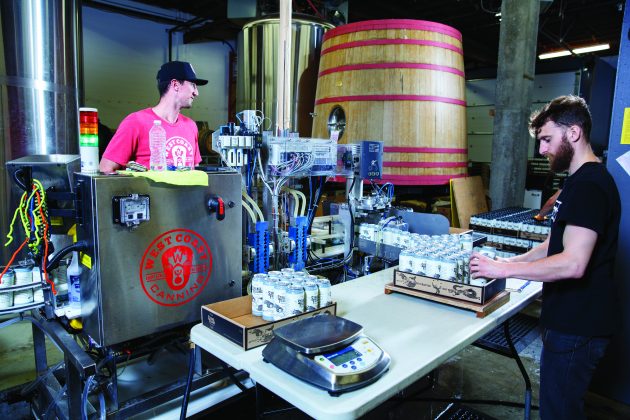 Kevin Pederson and Matt Leslie have tapped into an innovative business opportunity that’s helping the craft beer industry in BC and Alberta.

The result of a little ingenuity, a lot of sweat equity and some door knocking, Burnaby’s West Coast Canning is carving out a niche in a rapidly growing sector with its mobile canning solution, while solving small brewers’ packaging challenges cost-effectively.

“We believe in cans for craft breweries and all of the added benefits including portability, UV protection and freshness. Most of the brewers use us from once a month to every couple of weeks,” says Pederson, 33. “With packaging equipment being so expensive, canning lines especially, it doesn’t make too much sense for most of these breweries to buy their own equipment for the number of times they will run it during the year.”

The company’s two mobile canning trucks navigate the Rocky Mountain highways of BC and Alberta to service more than 30 clients. According to Beer Canada, the nation’s trade association, the number of breweries in BC and Alberta has doubled since 2011. In 2015, BC boasted 120 breweries while Alberta had 40. Cans account for approximately 69% of beer sales in BC and 66% in Alberta – both are dramatically higher than the national average of 55%.

The small company has covered a lot of ground since opening its doors in 2014. So too have its partners, who are both alumni of the business program at the University of Northern British Columbia (UNBC) in Prince George, BC, who met on the golf links. Pederson played NCAA golf in North Carolina while Leslie was ranked in the world’s top 20 long-drive competitions.

Pederson, who owns another packaging company that sells photodegradable six- and eight-pack rings to the liquor industry, originally came up with the idea because he noticed craft beer was mostly sold in bottles, the result of an industry stigma that bottles better preserve flavour, as well as the cost effectiveness and warehousing challenges of cans.

“I kept on getting the same response – ‘we don’t have plans for a canning line at this time,’ so it was pretty hard to sell them six-pack rings,” he adds. “One of the main reasons craft breweries didn’t use cans before West Coast Canning came along was the huge minimum order requirements for printed cans and the cost of equipment. I thought to myself, if we can figure that out, there’s opportunity here.”

Pederson and Leslie, who had little to no experience in the beer industry, started seizing that opportunity by developing and honing a business plan while looking south of the border, specifically to the craft brewery meccas of Seattle and Colorado, for inspiration as well as intelligence. They came across Wild Goose Canning, a machine manufacturer in Boulder that ended up building their mobile line.

“They make a fantastic piece of equipment,” says Pederson. “They built it to be mobile so we can piece it together at the location.” 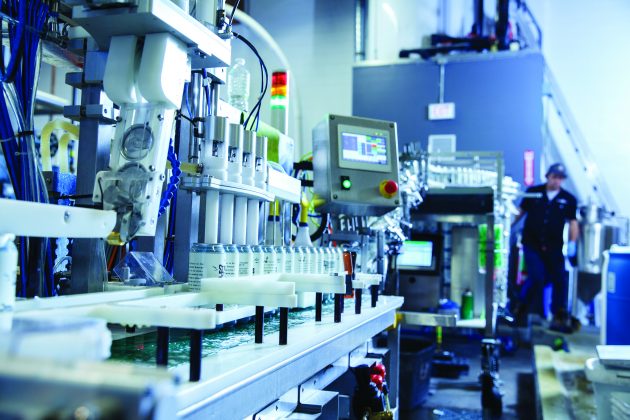 The canning line is divided into three sections. A de-palletizer pulls the cans off the pallet and moves them down the line via conveyor belt to the twist rinse, which sanitizes each can before it heads to the main canning line where four are filled at a time.

Each line is transported in its own 35-foot truck, which Pederson admits is a little daunting, especially for the crew navigating the twisty mountain roads.

“We drive around with a really important piece of equipment not only to us, but to our customers as well, so we tend to baby our machinery,” he says.

The key to a successful mobile canning operation on any given day is having properly trained operators who know what they’re doing, and a level of planning leading up to canning day to fully understand the specific needs of each brewery, says Pederson.
It takes approximately an hour for the initial set up and once ready, WCC can process anywhere from 1,500 to 8,000 litres in one day, with minimal waste. The process includes a protocol on startup that includes a variety of tests and a rigorous sanitization process Matt Human, WCC director of marketing, says is crucial.

“Going from one brewery to another, it’s important to follow a stringent sanitization process to ensure our equipment is ready to go,” he says. “We worked closely with industry partners on our clean-in-place process to see what works best. Cleanliness is a top priority for our customers and it’s important to show the breweries what we do before filling cans.”

The initial cans rolled off WCC’s line in 2014 with Pederson and Leslie making up the workforce. Two key employees (Mitch Evanecz and Human) joined the team later that year and the company finished its first full year of operations having filled approximately 750,000 cans (355 and 473 ml) and developed a clientele of 13 craft brewers.

“We were probably six months too early when we launched as there weren’t that many breweries in BC and we only had a few customers here and there,” Pederson says. “We were patient with the idea as we built our business plan, but eventually had to place a bet that more breweries would open soon and finally decided that we had to either do this or not, because someone would.”

They were right. Today, the company is operating six days a week and has grown to eight employees – four were added in April – with plans to hire at least two more by the end of the year. WCC boasts a client list of 57 with a new business line – warehousing and sleeving cans.

The company offers its customers the ability to purchase the exact amount of cans it needs for a specific run and will store the remaining labels until needed, overcoming the challenge of small breweries having to purchase and store large quantities of printed cans.

“If you are doing a pumpkin ale in October and you want to be in cans, you would have to order up to 150,000 to 200,000 printed cans,” Pederson explains. “Say you are a small brewery, it’s going to take you years to use them let alone the space to store them. The only upfront capital investment (in our service) is in the sleeve itself in much smaller minimum orders.”

That opened new doors for WCC and delivered a cost-effective solution to brewers.

“That has become a whole other manufacturing business for us now,” says Human. “It allows us to offer an as-you-go basis to the breweries and providing that convenience has been integral to growing our market.”

It’s also overcoming another challenge, specific to the high-cost of BC real estate.

“Our solution for mobile canning and shrink-sleeved cans is a huge savings in terms of square footage and the overall footprint,” says Pederson. “A lot of these breweries don’t have the extra space to store cans and now they can use their space to add more tanks and increase brewing capacity, keeping the focus on what they do best – making great beer.”

An emerging trend for WCC is how the company is becoming a crucial element in the launch of a new brewery.
“A lot of breweries think they have to package (on their own) from day one,” says Pederson. “But once they look into the process and costs involved, they turn to us and often make us part of their overall business plans, so we see and meet the people in these companies early on.”

“We need to understand our clients and their brands as well as the stories behind each of the brands,” says Human. “The care and attention they put into not only their beer, but their beer labels – it’s really a passion. And because we see their operation first hand, we’ve really come to appreciate the effort our clients put into making their beer. It makes us want to help them even more.”

Looking ahead, WCC will likely add a third truck in early 2017 to help with more canning days for BC and Alberta customers. It’s currently taking a serious look at how the single-serve wine market will unfold, which has its own challenges, but has been in their business plan since day one.

“We believe it could be the next big thing,” says Pederson. “These days everyone wants the portability and convenience of a single-serve option and it’s likely only a matter of time before they get what they want. The process isn’t quite the same as canning beer or cider, but we’re up to the challenge and why not? BC is said to be the wine capital of Canada.”
And that’s potentially “huge.”