How the first micro fibre laser in Canada is being put to a multitude of uses.

Adapt to thrive, or stagnate and die – that’s a universal truth which all business leaders know well, including those at Intricut in Niagara Falls, Ontario. Over the years, this custom tool and die shop has continued to evolve, adding machines to expand its range of services and go in new directions.

Before we look at Intricut’s newest purchase, let’s take a quick look at its history. The company was started in 1996 by Mike Stoll, in a small building with one wire EDM. Things moved along well and he moved the business into a bigger space. Stoll’s son, Kevin, joined the business after high school in 2001.

But in 2007, manufacturing in Ontario was showing signs of slowing down. This serious situation left Stoll wondering how he might survive and even thrive. He decided to invest in a conventional waterjet, which would expand what he could offer. It turned out that he’d made a good decision, and Intricut chugged on successfully through the downturn.

In the years that followed, Stoll and Kevin noticed a growing demand for quick turnarounds for small, high precision parts and assemblies made from advanced materials. To fill this demand, in 2019 they bought a micro waterjet. Although it took several years to educate customers about what this machine was capable of, it’s become an invaluable asset. Small high-precision components such as shims, gaskets, spacers, grippers and gauges, mostly for automation applications, make up the majority of the work. 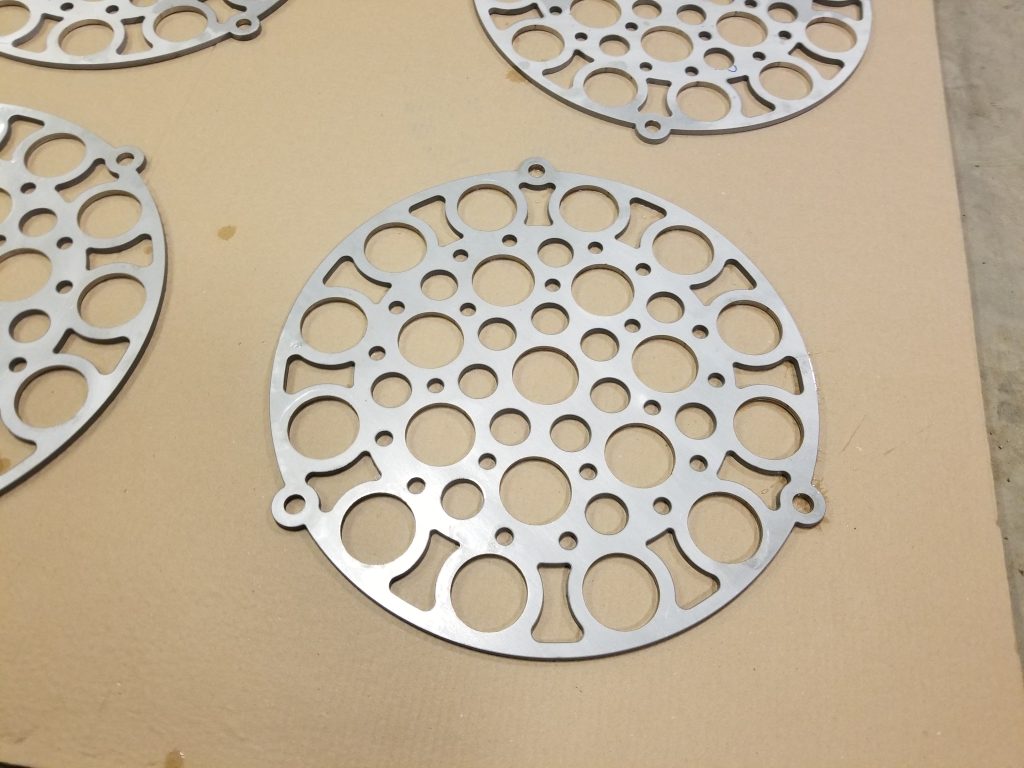 “Currently our main customers are involved in automation, electronics, power generation, automotive and food-beverage,” said Kevin. “Initially, the machine didn’t see much use for close to a year, but now it’s the busiest machine in the shop. We’re happy with the growth in the past 18 months. We basically took work that would have gone to our wire EDM and used the micro waterjet, explaining to our customers that ‘we can produce parts with high precision with much better turn-around time and at a better price point.’ It really headed in the right direction from there. The general transition is that we see a high volume of repeat jobs that are now dedicated to the micro waterjet.”

Typically, it cuts metals under half-inch thickness, but also plastics, glass and composites. Edges finishes are in the 16Ra inch range and cut tolerances of 0.001 of an inch are achievable, depending on material type and thickness.

Changes in 2020
In January of last year, Intricut achieved ISO certification, recognizing its ability to measure, inspect and certify parts in-house to ISO standards. To complement their ISO goals, Kevin had researched vision measurement machines, which utilize very high-accuracy cameras, and purchased one in 2019.

“The ISO certification has meant that a lot of the customers we’ve reached out to over the last 18 months have been able to say yes to our marketing incentives,” he said. “I would say it’s allowed us to add close to 10 new clients in the past two years that we wouldn’t otherwise had an opportunity with. Most of our customers are Canadian, but we have a couple of regular US customers and we’ve provided several others with some specific material sample cutting. Hopefully we will get regular work from them as well.” 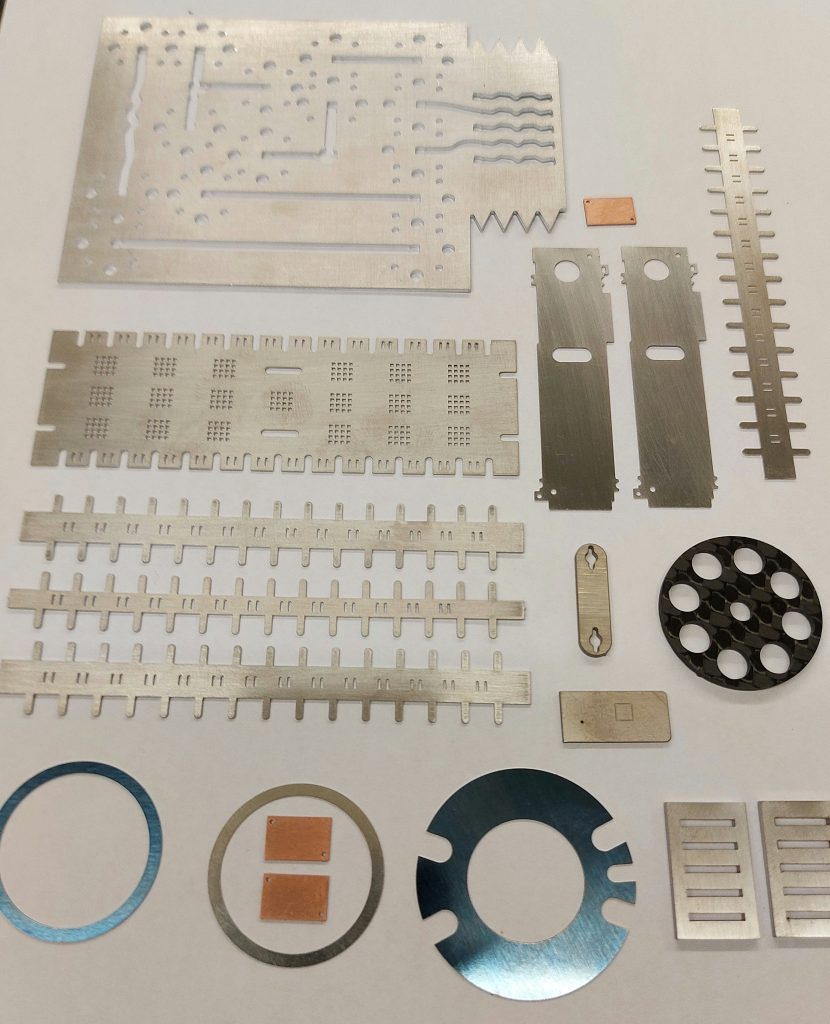 However, something else came into focus in 2020. It had been roughly seven years since fibre lasers had become widely available in the industry. In these machines, a laser beam is delivered through a fibre optic cable, which provides high accuracy cutting in metallic materials at incredible speeds and accuracies. Indeed, a fibre laser generally operates at 10 to 100 times the cutting feed rates of a micro waterjet, with nearly the same accuracy.

“It’s a flatbed cutting machine, designed to produce highly-accurate small parts very efficiently,” said Kevin. “It would mean we could offer customers a much more reasonable price point for higher-volume orders, impossible on the micro waterjet. So, we purchased one in 2020 and it arrived in December. So far, we’ve found that the two machines complement each other well.”

Micro level
The Intricut shop team usually use the micro fibre laser to cut thicknesses of six millimetres down to 0.05 mm. However, the machine’s 4000-watt generator enables it to cut up to 12 mm. Because of the radiation emitted from the laser beam, all the cutting takes place inside of a fully-enclosed cell.

“We had the manufacturer set our machine up with a 100-micron beam diameter, roughly the size of a human hair which allows us to produce very fine part features,” said Kevin. “It’s a fully enclosed programmable system, with high-thrust linear-driven motors and cutting speeds of 2400 inches/minute.”

So far, Intricut has used the machine to cut several grades of stainless material, as well as titanium, molybdenum, Inconel, Hastelloy and red metals like brass and copper.

“Recently we’ve been experimenting with some diamond materials for one customer,” said Kevin. “It also routinely cuts layered/laminated materials like carbon fibre as well as sintered or rolled materials. Materials with up to four layers are in common usage these days in many industries.”

In terms of heat effect, it’s minimal. “We get a lot of questions about that,” said Kevin. “The tiny beam diameter is surrounded with a supersonic blast of assist gas which helps to flash-cool the material, so there is very little heat saturation. However, if no heat effect is desirable, we have to use the micro waterjet.”

It’s also been an interesting challenge to find the proper cutting parameters for a variety of materials with the laser – finding the optimal edge and surface finishes as well as tolerances.

“Titanium in particular has been challenging,” said Kevin. “We’ve also had to adopt and design some interesting parts holding techniques. The laser uses various process gases, nitrogen with stainless, oxygen with copper and argon with titanium for example. The pressurized gas, anywhere up to 240 psi in some cases, can be flowing around the part, so the material must be held secure with no flexing on very thin materials. We’ve had to design and build the fixturing, clamping base plates and jig plates to hold an array of parts so that they’re fully supported and held rigid.”

The machine’s vision alignment system is automated and highly accurate for locating fixturing as well as picking up on existing parts which need various features added. That is, a part can be placed inside the machine’s cutting envelope in any orientation of the cut surface, and the machine takes a picture and orientates itself according to the CAD geometry.

Kevin and his team are very pleased with the use of the micro fibre laser so far. “With the reasonable cost for prototyping or high-volume orders, the range of materials we can cut and having ISO certification, we feel we are really well-positioned to service a very wide range of customers and industries,” he said. “I’d say rapid prototyping (mainly shims, gaskets, grippers and spacers) is about 50 per cent of what we do and the other 50 per cent is low or high-volume production runs.”

Intricut would like to see more high-volume orders and Kevin says there seems to be strong opportunities for this in several industries. In terms of future evolution at the company, there are several other laser technologies he is keeping an eye on. “I think lasers will be a bigger and bigger part of manufacturing,” he says, “in the decades to come.”
______________
Treena Hein is a freelance business writer based in Pembroke, Ont. E-mail her at treenahein@outlook.com.