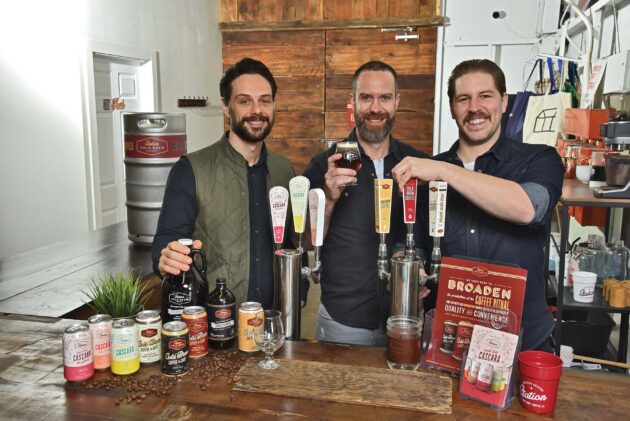 The three founders of Station Beverage, Mitchell Stern, Steve Ballantyne and Mike Roy in the taproom where they retail products in cans and on tap.
PHOTOS: RODNEY DAW

When entrepreneur Steve Ballantyne first tried Nitro-infused cold brew coffee in New York in 2013, he was instantly won over by its rich flavour and smooth texture. Canned cold brew already had a niche following in the US, but outside of coffee shops the category was practically unknown in Canada.

In just seven years Toronto-based Station has gone from start-up to national brand, and it’s now one of Canada’s fastest-growing beverage businesses. After helping to establish the cold brew coffee category in retail and opening their own custom-designed coffee brewery, Station continues to test the boundaries of the market with innovative new products, and a thriving co-packing business.

Coffee is Canada’s favourite beverage, according to the Coffee Association of Canada, with 72% of Canadian adults consuming it daily, at an average of 2.8 cups per day. The RTD category represented 5% of that market in 2019, a 2.5%-jump since 2014, and growth is expected as consumers continue choosing healthier to-go beverages over pop and energy drinks.

Unlike iced coffee – which is brewed using hot water and then chilled down – cold brew is steeped in water for several hours, extracting more flavour from the ground coffee and producing a less-bitter beverage. When a can of cold brew is infused with nitrogen and shaken it creates a creamy texture reminiscent of a draft-poured Guinness stout.

“We saw this beautiful intersection of three different categories: the high-quality craft coffee market, the consumer-packaged goods market, and the beer industry,” says Mitchell Stern, co-founder and vice-president of marketing and sales. That meant “bringing a craft-quality coffee into places that are more convenient for consumers, such as grocery and convenience stores, and taking cues from the beer industry – we’re sourcing really high-quality ingredients, and producing everything ourselves using a similar process and equipment.”

The entrepreneurs, then ranging in age from 27 to 33, brewed their first batches in a shared kitchen designed for start-ups, then moved to a 1,200-square-foot microbrewing and retail space in Toronto’s Junction neighbourhood. Together they had plenty of business, marketing and technical skills, but little in the way of coffee or brewing experience. Every step was a learning curve, especially as the company began to scale up.

In late 2017 Station settled in its current 10,000-square-foot facility and began construction on Canada’s first coffee brewery, opening in early 2018 following extensive renovations. “There’s no benchmark in the industry for cold brew coffee,” says Mike Roy, co-founder, brewmaster and vice-president of operations. “So we had to envision what we wanted, and then work back from that to figure out the process. Training with the equipment takes a lot of trial and error. But between myself, Steve and Mitch, we have a wide variety of skill sets – I don’t think we’d be in manufacturing if we didn’t.”

The brewing process starts with Fair Trade, certified-organic whole roasted coffee beans from Oakville’s Reunion Coffee Roasters, which is freshly ground on site. “Our brewing vessel is technically a modified version of a mash tun,” Roy says. “It’s a simple process, but in practice there are techniques to the way the coffee is ground and the different ratios of coffee to water. That’s really where a lot of the flavours are going to come in, and what’s going to separate different brews.”

Cans of cold brew are dosed with liquid nitrogen before sealing.

After steeping in temperature-controlled water for 18 hours, the grounds are removed, and the liquid is put through a three-stage filtration process to remove any micropathogens. “Post filtration the product is pumped into the bright tanks, which are temperature controlled, and that’s where we condition everything with nitrogen, and where we get the product to the RTD level that we’d like,” Roy explains.

On the way to the canning line the coffee also goes through a 0.2-micron filter to eliminate any remaining micropathogens. “It basically sterilizes the liquid, which has allowed us to extend our shelf life drastically [from four to 18 months]. There’s no pasteurizing, heating, chemical treatment or preservatives, it’s done using microfiltration.”

About 50% of production is automated. “We have an automated canning system…The cans coming down the line, being filled, being dosed with nitrogen, getting seamed, all of that is automated.” At the same time due to frequent Q&A checks, pack out remains semi-manual, as do labour-intensive tasks such as loading equipment with ingredients.

“The new brewing system that we have on the way has a fully automated agitation system,” he adds, “so things are growing a little bit in the automation department, but it’s still quite hands on.”

Station also recently installed brewery management software that allows the operator to remotely monitor things like liquid levels in tanks. “When you grow at close to 100% per year there’s always equipment that needs to come in,” Roy says.

That on-going investment has meant Station can offer co-packing services for other beverage brands. “When we first got the canning line it was way more volume than we needed, but it opened up the co-packing space for us,” he recalls. “My philosophy is that if my canning line is not running it’s not making any money for us.”

Roy estimates Station produces roughly 90% of the cold brew coffees currently available in Canada. Last year it produced about 350,000 litres of coffee, and Roy expects to double volume in 2020 with the addition of equipment that will bring total capacity to one million litres. “There’s at least $1 million in assets on the floor. The great thing about owning your own equipment is you’re not confined to somebody else’s process, and it allows us a lot of freedom to make our own products,” he says, adding the company is largely self-funded.”

Station’s top-selling SKU is its original 355-millilitre New Orleans Style Nitro Cold Brew, a sugar- and dairy-free blend of coffee and chicory root with just 15 calories. Other varieties include naturally flavoured mocha, vanilla and coconut, each with 40 calories and five grams of organic cane sugar. As well as selling kegs for foodservice, Station operates a wholesale business called Craft on Draft, supplying locations such as offices with dispensing equipment (kegerators) and kegs of Nitro cold brew coffee, sparkling water and kombucha from local producers like Tonica Kombucha.

This past winter the company collaborated with Baileys on a RTD Classic Black cold brew in shelf-stable Tetra Paks. It was also a test-run for future products that will require a Tetra line with an UHT pasteurizer.

Station’s new plant-based lattes, developed with NSF and the University of Guelph, will also be in Tetra Paks. “If you’re adding something like oat milk you have to go through a heat process, you have to sterilize the product,” Roy says. The company will launch three flavours of oat-milk lattes this spring. “That’s where the industry is heading, so we want to make something that’s a little more guilt-free, with a clean label, less sugar, fewer calories and with high-end craft coffee.”

Station’s other new launch is its 355-millilitre Cascara Sparkling Iced Tea, a cold brewed, carbonated beverage (three flavours)made from cascara, the shell around the coffee bean that farmers usually discard. Introduced in October, Stern says the product “evolved from us understanding that we’re not just a coffee company, we’re a beverage company. So in our goal to create healthier products, we realized there was a great opportunity in the iced tea market.” And they’re just getting started.

This article appeared in the March-April 2020 print edition of PLANT Magazine.