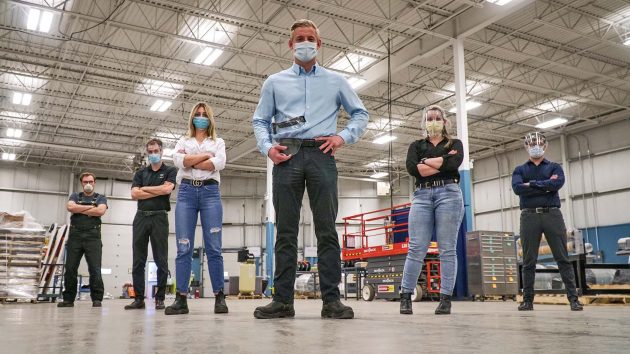 The Canadian Shield has won a contract from the federal government to manufacture 10 million reusable face shields for healthcare providers and essential workers across Canada, and it has surpassed production of one million units.

There are many examples of manufacturers switching up their operations to produce personal protective equipment (PPE), or other safety products aimed at battling the spread of COVID-19. But what’s notable about Canadian Shield is the speed of its pivot, and its transformation from such a small operation to a much larger manufacturing concern.

This Kitchener, Ont. PPE manufacturer, in existence for just a few weeks at the time of its federal contract announcement April 24, will double its workforce from 150 to 300 employees to fill the order by August.

“The federal government’s contract will put us in a position to expand our operating capabilities to address the critical shortage of medical equipment,” says Jeremy Hedges, founder and CEO of The Canadian Shield.

“We understand the significant toll that COVID-19 has taken on our local economy and the Canadian workforce as a whole. This investment will allow us to put at least 150 more people back to work, reinvigorating our local manufacturing sector in Waterloo Region.” 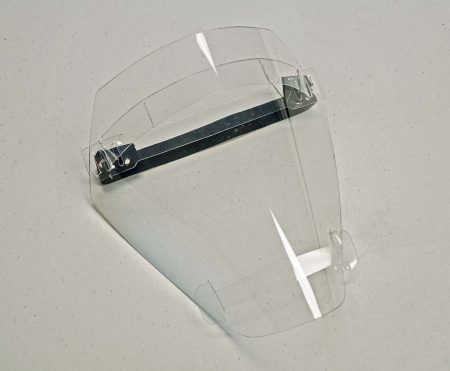 As of May 11, the one-millionth face shield had rolled off the assembly line for distribution. The milestone shield is part of a 500,000-unit order for Ontario Health that will be allocated to hospitals and healthcare facilities across the province.

This remarkable start-up sprang from InkSmith, Hedges’ original company. The manufacturer of educational tools with 10 employees responded to the COVID-19 state of emergency’s need for medical gear by producing face shields using 3D printing and laser cutting technology at its 10,000 square-foot plant.

The first version of the face protector was called “Community Shield”, designed by Czech Republic firm Prusa3D. It consisted of a 3D-printed headband and reinforcement piece, clear protective face shield and an adjustable head strap.

But 3D printing would not handle the expected volume so the company switched to its own patent-pending design – the Canadian Shield – laser-cut to eliminate the 3D-printed parts. The new shield can be washed, chemically sanitized and reused. It’s also compatible with N95 masks, surgical masks and safety goggles.

Canadian Shield hired 80 workers laid off because of the financial impacts of COVID-19 to produce the protective gear. And demand has pushed the company to expand to a 50,000 square-foot space where the face shields are produced on several automation lines. Plastic is fed into machines that cut out thousands of shields hourly, in conjunction with dozens of manual punch-press machines that are also producing parts.

The shields, approved by Health Canada in March, are going to hospitals across Ontario, including Joseph Brant in Burlington, Grand River in Kitchener, Cambridge Memorial and Queensway Carleton in Ottawa.

“The story of The Canadian Shield demonstrates the strengths of Waterloo region, combining modern-day innovation of a company like InkSmith, our traditional roots in manufacturing and our collaborative spirit of cities like Kitchener and Waterloo with the private sector to move mountains [and] get things done,” said Kitchener mayor Berry Vrbanovic in a statement.

“InkSmith’s Canadian Shield is a perfect example of tech for good and an inspiration to other innovators looking to help Canada respond to COVID-19,” said Iain Klugman, president and CEO of Communitech, a public-private innovation hub. It supports more than 1,400 companies from start-ups to scale-ups and large global players in the Waterloo Region.

The Canadian Shield has partnered and collaborated with Communitech, City of Kitchener, Bereskin & Parr, Whitney, Waterloo EDC and BDO Kitchener-Waterloo.

Once the contract with Public Services and Procurement Canada is fulfilled, the manufacturer plans to extend its reach internationally.