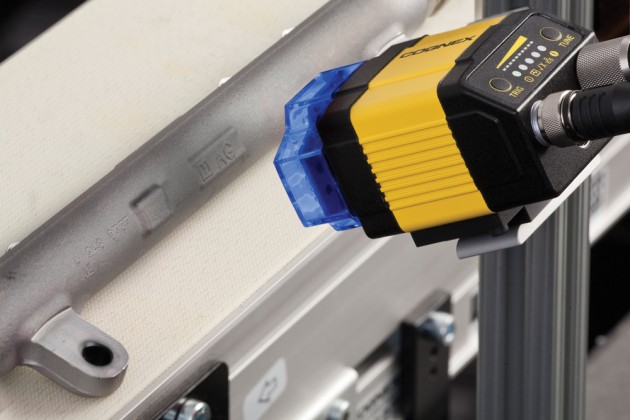 Image-based readers use algorithms that search for the position and orientation of the barcode. PHOTO: COGNEX CORP.

A Canadian manufacturer of composite materials used in construction materials, tires and other products that moves its work in process on a power and free conveyor system was having issues with the frequent shutdowns needed to clean ID tags and clear collisions.

The company (not identified by request) makes fibreglass fabric sheeting other manufacturers form into anything from automotive components to cafeteria trays.

Working with Shelley Automation, a distributor of high technology automation and control products and services based in Toronto, the company switched to image-based ID readers with a new algorithm that improves signal quality and increases the speed of signal acquisition, leaving more time for decoding. The new devices provide 99.9% read rates.

Overall traffic on the conveyor has been reduced by 80% because carriers now move directly to the next station rather than looping around. The conveyor stops about once per shift, saving operators up to 190 minutes.

Each carrier has a tag with a 1D barcode used to track operations performed on the contents and direct it to the next station. But carriers go through ovens where they pick up soot, get sprayed with water and are dented in collisions. The laser scanners had read rates averaging 86%. Operators had to stop the system about 20 times per shift (for an average of 10 minutes) to clean tags or clear collisions.

The carriers pick up composite filament called balls of yarn in the forming department and move to a washing station where the filament is sprayed with water. Then the carrier goes through a drying oven.

Misreads for the system averaged about 60,000 per month, and this contributed to a maintenance issue. The conveyor system has many chains that needed to be replaced every two years at a cost of about $25,000 each.

Instead of relying on a photocell monitoring the reflections of a single laser beam passing across the barcode to generate an electrical signal, image-based readers capture an image, then use a series of algorithms to make it easier to read. A typical algorithm searches the entire image for the code and identifies its position and orientation for easy reading. Other algorithms handle degradations in code quality such as damage, quiet zone violations and reflections.

Image-based readers are solid state and don’t wear out over time, so they provide two to three times the life of motor-driven laser scanners.

They also make it possible to save “no-read” images for later review to determine if the problem resides within the reader setup or the process.

Image-based readers also read two-dimensional codes like Data Matrix (used by manufacturers to improve traceability) because they can hold a much larger volume of data.

Cognex DataMan 300s use 1DMax code algorithms with Hotbars technology to read even damaged linear bar codes at a high rate of speed. 1DMax uses omnidirectional texture analysis to identify areas in the image that may contain the barcode regardless of its orientation. Once neighbourhoods are evaluated for the likelihood of a barcode, a clustering algorithm joins likely neighbourhoods into more complete regions. These regions are further analyzed and filtered to produce the final set to be subjected to decode attempts.

High-tech simplified
The time budget for texture analysis is just a few nanoseconds per source image pixel on a relatively inexpensive digital signal processor (DSP). Meticulous hand-coding of instructions and sophisticated control of memory makes it possible to execute the finder in a mere handful of processor clocks per source pixel.

Once regions likely to contain barcodes are identified, decode attempts can be made. The fundamental image analysis operation is the extraction of a 1D digital signal from the 2D source image along a line of given orientation, often called a projection line. To provide high geometric accuracy, good noise reduction and acceptable resolution, contemporary state-of-the-art methods effectively rotate a portion of the image so the projection line becomes horizontal. Rotating a digital image typically involves the use of some form of interpolation to estimate pixel values at points in between squares of the pixel grid.

Interpolation methods are based on a model of rotation in the continuous plane, but a discrete pixel grid can’t accurately represent rotation at the small scales characteristic of fine features, which results in some signal blurring. Hotbars’ fast signal extraction speed comes from using an algorithm that’s well-matched to contemporary DSP architecture.

The DataMan 300 readers are configured with a continuous trigger that capture about 50 images per second. The carriers move at two inches per second so the vision systems have approximately 30 chances to read each tag as it moves past.

The cameras are configured with LED array lighting and a liquid lens that automatically focuses on the moving tags and are mounted on brackets that aim the reader. The vision systems connect to the plant network through ethernet and communicate with the PLC using the PLC5 protocol.

Since changing over to the new readers, the payoff for the composite materials manufacturer has been a reduction in the average number of shutdowns per shift from 20 to one and the resulting conveyor system downtime has been cut from about 200 minutes to 10 minutes. Now operators spend much less time on clearing shutdown issues and can focus more on the higher value aspects of their jobs.

This is an edited version of an article provided by Cognex Corp., a Natick, Mass.-based provider of vision systems, software, sensors and surface inspection systems. Ron Pulicari is a senior marketing manager, Americas.

This article appears in the July/August 2015 issue of PLANT.