Award-winning retail brand moves from a church basement to a full service plant. 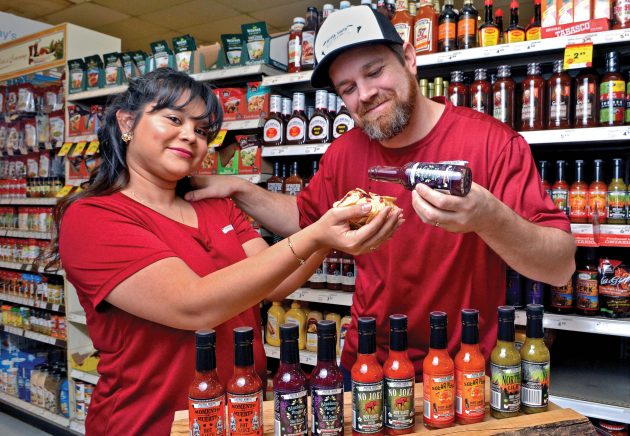 Ana and Drew Stevens knew their fiery food company was at a crossroads in 2016 when they landed a deal for their hand-made hot sauces to sit on the shelves of Sobeys’ entire Ontario retail network. The fledgling family business already had products in approximately 70 independent stores across the province, but the relationship with Sobeys was a significant step into the mainstream grocery space. It would mean much wider distribution and potential sales. It would also require a substantial scale up in production.

“At the time we were still doing production in a church basement,” recalls Ana Stevens, co-owner of Pepper North Artisan Foods. “It was an exciting time for our company, but it also forced us to think about what we were doing and how we were going to fill those larger purchase orders.”

They had to decide either to go with a co-packer or start producing sauces themselves on a bigger scale, adds co-owner Drew Stevens. Losing control of quality was a main concern. “One of our core values is to create the highest-quality product possible. Because it was so important for us to maintain the quality we decided we were going to continue to self-produce.”

By establishing strong local partnerships to ensure a steady supply of raw ingredients that meet their quality standards, the husband and wife team successfully ramped up production at the Ontario Agri-Food Venture Centre (OAFVC) in Colborne, Ont.

Since then growth has been explosive for the Oshawa, Ont.-based company. It now has hot sauces and condiments in roughly 400 retailers throughout Ontario, Nova Scotia, New Brunswick and PEI, including at Sobeys, Whole Foods Market, Longo’s, Loblaws, Ambrosia Natural Foods and Foodland chains, followed recently by Metro, Fortinos and Coppa’s Fresh Market stores.

“Ultimately our plan is to become a national brand, a staple in Canadian households,” says Ana. “But we never want to compromise on quality and integrity. We want to ensure we stay Canadian owned and operated. We also want to ensure that we’re able to keep contributing to our community in terms of job creation and supporting the local farmer partnerships.”

Pepper North launched in 2013 as an online business selling hot pepper seeds to an under-served Canadian market. For years Drew’s parents had run a produce market and had grown their own seasonal vegetables. Cultivating exotic hot peppers had become a particular passion for Drew and his brother Mike, although they were forced to rely on imported seeds from the US, South America and Australia.

Recognizing the gap in the market, the Stevens began drying their ever-widening range of homegrown specialty peppers and selling the seeds online.

As demand for the seeds climbed – along with the piles of leftover peppers – Drew began experimenting in the kitchen with the discarded peppers, mixing them with unexpected fruit flavours such as pineapple and orange, and hand bottling the hot sauces. At the urging of friends and family, the Stevens decided to sell their first two recipes at local farmers’ markets. Overwhelming response led to gourmet food shows, and numerous wins at spice and heat competitions across North America.

By 2014, when they began to receive requests for more bottles than they could produce, the couple made the first of several successful strategic decisions.

“We were still growing our own peppers, but we couldn’t really keep up with demand,” Drew explains. “We had to decide then whether we would be farmers or processors. So we partnered with an Ontario farmer. Then we started approaching local stores. The decision changed the entire direction of our company, from being a small mom-and-pop business to seeing a big opportunity for growth.”

Stirring a batch of No Joke hot sauce.

Moving to the OAFVC was another key turning point for Pepper North, allowing it to boost production capabilities dramatically. The government-funded facility is a full-service food production plant that offers rentable space for small- to medium-size food ventures specializing in value-added fresh fruit and vegetable products. It’s designed to benefit both local growers and processors.

“It’s allowed us to expand significantly from that time,” says Drew, who oversees all production. “We can produce in the neighbourhood of 2,000 bottles per day, and we’re making these batches on average once a week. There’s lots of room to grow.”

The centre offers a full commercial kitchen, lab, bottling line, packaging equipment, walk-in freezer with storage space – allowing Pepper North to clean, flash freeze and store its raw ingredients for the coming year – and has highly trained staff that can be hired for production as required. It also allows manufacturers to carry out research and development onsite, and produce smaller test batches.

“We never dreamed our product would be on the mainstream grocery shelves. We always thought it would be a boutique brand,” Drew says. He admits targeting a typically slow-moving category, with few domestic competitors, has been beneficial for the company. “Our angle from the beginning was to cater to a customer who is looking for something hotter than you would find in a mainstream store. We’re not trying to compete against the mild-to-medium market – we do have a couple in the medium range but we mostly focus on the hotter end using more unique hot peppers such as ghost pepper, scorpion pepper and Carolina reaper.” Drew says the challenge is always the cost of raw produce, especially for off-season ingredients, as well as maintaining consistent supply and quality as the company grows.

Pepper North uses only Ontario hot peppers produced from the company’s original seeds, and buys locally grown ingredients whenever possible to work closely with their suppliers.

“We really focus on our strong relationships with farmers and orchards, as well as our distributor partners and our retail partners,” Ana says, who oversees distribution, logistics, sales and customer service. “Having a partnership with us helps them as well, so we want to make sure that what we do is mutually beneficial.”

“We’re not just a hot sauce company – we’re so much more than that,” Ana says. “As we grow we want to use the knowledge that we’ve gained over the past six years for other entrepreneurs just starting their companies, or for those hoping to scale up who want a bit of direction. We want to help them understand what the expectations are with retail and distribution partners and with consumers. It takes years to get into some grocery retailers, and it takes showing that your product sells. You’re not going to get in overnight, it takes patience and you have to keep going.”

Featuring only healthy ingredients has been as important to the success of Pepper North as maintaining quality. The sauces are free of preservatives, and rather than using cheaper white sugar and vinegar they include wildflower honey, maple syrup, apple cider vinegar and wine vinegar.

“We want a clean label, only whole ingredients not extracts, and we want our customers to see the real ingredients and taste the chunks of fruit,” Drew says.

The company’s original recipe, No Joke Hot Sauce, combines the extreme heat of ghost peppers with sweet onions, roasted garlic and fresh lime juice, tomatoes and red bell peppers. With a five out of 10 on the heat index (in other words, “hot”), the sauce is still its top seller. On the opposite end of the spectrum is Stargazer Hot Sauce (made with jalapeño peppers, Scotch bonnet peppers, ghost peppers and chipotle peppers – a nine or “ultra hot” on the heat index), which Drew says is at the top of his tolerance level. However, he says, “we never want to go to the novelty sauce. There are sauces out there that are so hot you really can’t eat more than a drop…we want to make sauces that are hot but appeal to people’s tastes. We want people to enjoy it, finish it and buy another one. It’s a fine line.”

Pepper North relies heavily on social media to communicate that sort of message directly to customers and retailers. “Creating brand awareness has been our hurdle over the years, but we’ve been slow and steady,” Drew says, explaining that they use their website, LinkedIn and Facebook to highlight new products, to post cooking videos showing the versatility of the sauces, and simply to talk to consumers.

“It’s definitely been a big factor in our continued success,” Ana says. “People recommend flavour combinations or ask about the peppers we’re using. Listening and establishing those relationships inspires us to come up with new hot sauces. We also use the different platforms to educate our customers. It’s important to us to communicate our production process through videos and pictures. And it’s more engaging for our customers.” It has also helped build sales momentum, as loyal customers post pictures of themselves online with their favourite Pepper North sauces.

To date Pepper North has won 29 industry awards, something the Stevens say has been a huge validation from the industry. The company is currently looking at distribution in Western Canada, and will launch an additional hot sauce this year. “Some companies have 12 or 14 hot sauces – we have six right now,” says Drew. “We want to slowly increase our product line and focus on quality products. So that means taking the time to find the right ingredients and to develop them. We always want quality over quantity.”

This article appeared in the March 2019 print issue of PLANT Magazine.