There are challenges for the Canadian industry to overcome but also opportunities. 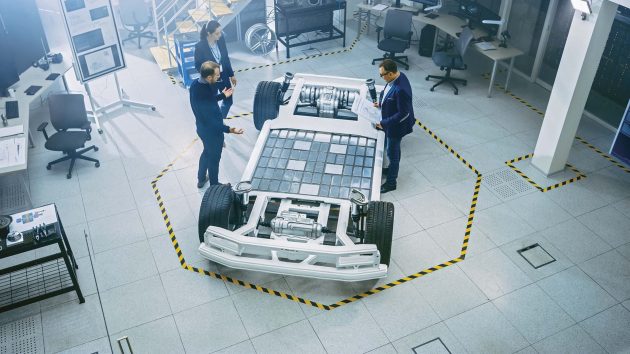 Canada’s automotive sector contributes about $20 billion to GDP annually so it’s key to the economy. And especially so for Ontario where, under normal circumstances (as in COVID-19 free production), it accounts for more than 20% of GDP.

When the North American auto industry shutdown over COVID-19, so did sales. As production began ramping up in May, a rebound began – then less vigorously in June, according to a Scotiabank Global Economics flash report. It’s a 46% (month-over-month) improvement, although annualized sales are down 16% year-over-year at and estimated 1.6 million units.

The annual sales forecast is 1.5 million units for 2020, but there is caution centred on how events in the US impact the Canadian economy.

Pushing ahead of the COVID -19 disruption, the question hanging over the industry is what the future looks like.

A recent report by KPMG (Canada’s Automotive Future) states production of electric vehicles by the major OEMs will accelerate rapidly over the next five years, as will autonomous features.

By 2025, the advisory firm predicts as many as 13 million EV and hybrid vehicles produced annually.

Ontario may have been North America’s top automotive supplier in 2017 (more than 2 million vehicles), but Canada’s industry produces just 0.4% of global EV production, 80% lower than the global average, according to the International Council on Clean Transportation (ICCT) in Washington.

ICCT says Canada’s position would be strengthened with stronger action on transitioning to EVs.

Investment by OEM automakers has slowed and current production levels are at risk. GM has closed its Oshawa, Ont. operations, and there’s some question about Ford in Canada’s Oakville, Ont. plant where it assembles the Lincoln Nautilus and Ford Edge. The automaker has scrapped plans to produce the Edge SUV after cancelling the Flex and MKT last year. Although the automaker says it has no plans to exit Edge production, it doesn’t specify where the vehicles will be produced.

Unifor began negotiations with the Detroit Three in August and attracting EV production investment will were part of the mix. So far Ford and Fiat Chrysler have agreed to producing EVs at their Canadian plants.

But the KPMG report says Canada’s industry will need a significant overhaul to accommodate design, engineering and assembly of EVs, which will be very different from the production of internal combustion engines (ICEs). For example, EVs have thousands of fewer parts.

It comes down to challenges and opportunities. An encouraging factor is the 200 Ontario companies that develop cutting-edge automotive technologies. KPMG calls that a “critical step” leading to participation in the future supply chain.

Having infrastructure in place will help drive EV manufacturing investment in Canada. Government climate change goals are setting the stage and there are initiatives such as a federal $300 investment in infrastructure, establishing charging stations and promoting consumer purchases of vehicles. But KPMG warns attracting investment will require Ontario cutting red tape.

Dominant battery technology – hydrogen or lithium – is still up in the air. Lithium will require materials and metals, many of which can be sourced and processed in Canada.

The country is also strong in artificial intelligence. There are more than 350 automation and robotics companies in Ontario’s Toronto-Waterloo corridor, making Canada well placed to develop the autoworker of the future.

Making a transition to EV production offers promise, but don’t expect to see an end to ICE vehicles anytime soon. Internal combustion vehicles will continue to have a strong presence. EV sales are not expected to exceed ICEs until at least 2040.

This article appears in the September 2020 print issue of PLANT Magazine.

Related Stories
How Canada can capitalize on U.S. auto sector’s abrupt pivot to electric vehicles
Reshaping the auto industry: Technology innovation is the way ahead
An unclear path for Canada’s auto sector as electric age approaches
GM shows 13 electric vehicles as it tries to run with Tesla