An innovative renewable catalytic process will provide cleaner fuel for the transportation sector. 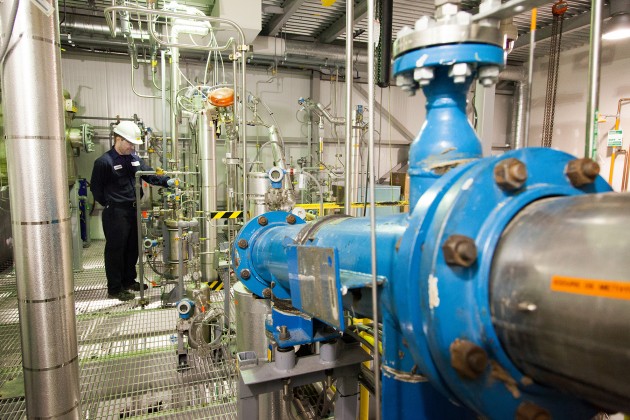 Enerkem takes renewable fuels to the next level with a new kind of feedstock. PHOTO: Enerkem

Last October, the National Research Council of Canada flew the country’s first civilian jet powered by 100% biofuel. Initial test results from the historic Falcon 20 flight across Ontario skies showed that the biofuel, which was derived from oilseed grown on Saskatchewan’s prairies, is not only a cleaner alternative to conventional fossil-based aviation fuels, it’s also as efficient.

Enter Enerkem, the Montreal-based biofuels and renewable chemicals developer that’s currently developing a set of new catalytic processes with the University of Sherbrooke. The project, which will convert chemical-grade synthesis gas derived from household trash into renewable fuels and chemicals, got funding of $1.1 million from Natural Resources Canada through the ecoEnergy Innovation Initiative.

The company is also about to commission its Alberta Biofuels Facility in Edmonton, which will be the first full-scale commercial plant in North America to produce a chemical-grade synthesis gas from municipal waste. The gas serves as a key intermediate for the production of renewable chemicals and fuels such as methanol and ethanol. Labrie says the plant has the capacity to produce 40 million litres of bioethanol per year – enough to fuel 400,000 cars on a 5% ethanol gasoline blend.

Reducing emissions
Development of these biofuels makes sense for the transportation sector, which now accounts for 25% of all greenhouse gas emissions (GHG) – a major contributor to global warming. Ethanol reduces GHG emissions from 48% to 68% relative to gasoline, according to Natural Resources Canada. And the Canadian government now mandates that local gas station pumps must contain at least a 5% blend of ethanol, or E5, under Canada’s Renewable Fuel Standard (RFS). The US Environmental Protection Agency has also announced recently that 2013 RFS must be a 9.74% blend of ethanol in gasoline – almost double the previous regulation. In Brazil, flex-fuel cars run on an 85/15 ethanol to gasoline blend and internationally, there’s a push for higher percentages.

Certainly, growing environmental concerns, fears of lackluster energy security and job creation are spurring biofuels development, and by 2016 the global market is expected to reach $147.26 billion, growing at a pace of 16% per year until 2018, according to data from Rui Resendes of Green Centre Canada.

But creating biofuels, such as ethanol, often requires sugar-rich feedstocks, such as corn or sugarcane, which raises questions about the appropriateness of using arable land resources for fuel development instead of food.

Enerkem CEO Vincent Chornet told The Globe and Mail that “it is now time that we moved towards second generation biofuels that are more benign environmentally, and take their carbon from residual feed stocks that would otherwise be landfill.”

Luckily for Enerkem, it doesn’t need arable land to develop its biofuels, and it has secured a 25-year agreement with Edmonton to increase the city’s waste diversion rate from 60% to 90%. That leaves all but 10% of the city’s trash that can’t be composted or recycled to Enerkem’s gasification, sequential gas conditioning and catalytic technology facility, where the sorted waste, forest biomass and agricultural residues will be used as feedstock.

The waste-to-biofuels facility in Edmonton is the latest in Enerkem’s $132.5-million project that also includes a pilot project, and a demonstration plant that opened in 2011. The Edmonton plant is being built in partnership with the City of Edmonton, and Alberta Innovates, while Waste Management of Canada and EB Investments are also investors.

Future fuels
“Today biodiesel is blended with diesel. Ethanol is blended with gasoline. In the future you will also have other fuels, biobutanol, for example, or algae-based fuels. Drop-in fuels, instead of even being blended with either diesel or gasoline, could actually replace gasoline. It’s the same. It’s like synthetic gasoline or synthetic diesel or jet fuel,” says Labrie.

The company’s game-changing technology is the brainchild of Esteban Chornet, a chemical engineer and University of Sherbrooke professor. He is also the father of Vincent, Enerkem’s co-founder and CEO. Founded in 2000, the company has grown to 125 employees in 13 years during which time ethanol has become a significant fuel commodity, with global production now topping 100 billion litres.

Because drop-in fuels are almost indistinguishable on a molecular level to hydrocarbon fuels, they fit into existing infrastructure. Almost half of all cars made in North America today, for example, are flex-fuel operating on a blend of 85% ethanol and 15% gasoline, or E85, notes John Wilkinson, former Ontario Minister of Research and Innovation and Minister of the Environment.

Enerkem’s transformative technology puts the company in a positive strategic position to do business both downstream and upstream by offering improved waste management to municipalities looking to reduce landfill and GHG emissions, while equipping refiners with an alternative fuel that’s increasingly specified by government regulation.

The saying, “One man’s trash is another man’s treasure” has never seemed so true.

Kim Laudrum is a business writer based in Toronto and a frequent contributor to PLANT. E-mail klaudrum@rogers.com.

From the November/December issue of PLANT West.