Statistics Canada released its monthly manufacturing survey for May 2021. According to the survey results, manufacturing sales fell 0.6 per cent to $57.9 billion in May, the second consecutive monthly decline.

The machinery, chemical and fabricated metal industries were mainly responsible for the decline. Sales of wood product manufacturing increased the most, followed by primary metal. Year over year, total sales were up 42.6 per cent.

Sales in constant dollars decreased 2.5 per cent to $48.2 billion in May, the second consecutive decline indicating a lower volume of goods sold as manufacturers continued to deal with supply chain issues. Sales of machinery products declined the most (-16.2 per cent) by volume.

The Industrial Product Price Index increased 2.7 per cent in May, on higher prices for lumber and other wood products (+17.9 per cent). Prices of raw materials purchased by manufacturers rose 3.2 per cent. 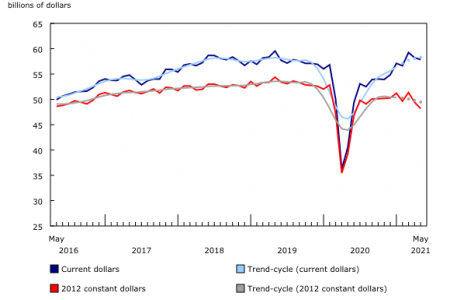 Following record high sales in April, sales of machinery declined 16.9 per cent to $3.1 billion in May, mainly due to lower sales of agricultural, construction and mining machinery. On a year-over-year basis, sales were still up 25.7 per cent. A number of machinery manufacturers indicated that the lack of raw materials (including microchips) and delay in shipments affected their production in May. As a result, the industry’s capacity utilization rate fell 4.1 percentage points.

Sales in the fabricated metal product industry fell 1.8 per cent to $3.6 billion in May. Lower sales of boiler, tank and shipping containers along with coating, engraving, cold and heat treating and allied products were responsible for the decline.

The wood product industry marked another record month of sales, rising 6.1 per cent to $5.4 billion in May. Higher prices were responsible for the gain as sales in constant dollars decreased 4.7 per cent. While the total value of building permits issued in Canada fell 14.8 per cent, exports of forestry products and building and packaging materials rose 8.9 per cent in May.

Sales in the primary metal industry increased 3.6 per cent to a record $4.9 billion in May, driven by higher sales of alumina and aluminum production and processing. The gains were mainly due to higher prices, as volume sales edged up 0.6 per cent.

Manufacturing sales declined in six provinces in May, led by Ontario, Manitoba and Quebec, while Alberta posted the largest increase.

Following two consecutive increases, sales in Manitoba fell 6.6per cent to $1.7 billion. This drop was due to lower sales in the food (-7.2 per cent), machinery (-17.8 per cent) and transportation equipment (-16.0 per cent) industries.

Sales in Québec decline the most

Manufacturing sales on a seasonally adjusted basis fell in seven census metropolitan areas covered by the survey in May, led by Québec and Montréal. Edmonton posted the largest gain.

Following a 17.0per cent decline, sales in Québec decreased 11.1per cent to $1.1 billion in May, mainly on lower sales of petroleum products. Nevertheless, sales in Québec were up 20.4per cent compared with May 2020.

In Montréal, sales fell 1.9per cent to $6.4 billion, pulled downward by lower production of aerospace products (-12.3 per cent). However, the aerospace product and part industry in Montréal has seen four monthly increases in sales since January 2020. 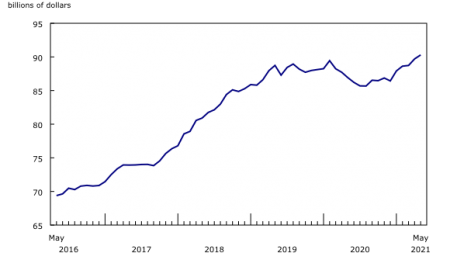 The inventory-to-sales ratio edged up from 1.54 in April to 1.56 in May. The ratio measures the time, in months, that would be required to exhaust inventories if sales were to remain at their current level. 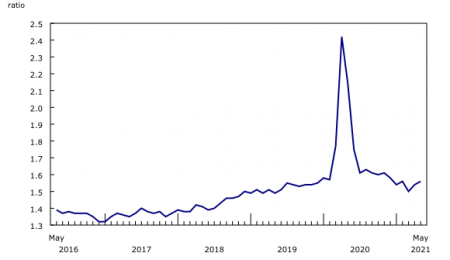 Following a 2.0per cent decrease in April, unfilled orders decreased 4.1 per cent to $87.1 billion in May, led by an 11.3 per cent decline in unfilled orders of aerospace products. Many aerospace manufacturers have been affected by the uncertainty surrounding the global economy and travel restrictions caused by the pandemic, which has resulted in several order cancellations since 2020.

Total value of new orders fell 4.0 per cent to $54.1 billion in May, pulled downward by a decline in new orders of aerospace products and parts. 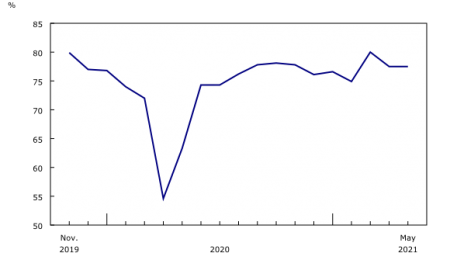 The capacity utilization rate (seasonally unadjusted) for the total manufacturing sector was unchanged at 77.5 per cent in May.